If Imam Hassan (A.S) had as much followers as you have today, he would have risen up against the caliphate of his time. At first, he staged an uprising but when he learned that his followers had been bribed, he dismissed his decision to follow it up; but you currently have followers in all Muslim countries who obey you in their religious matters. If you ever take action and rise up, I would be the first to follow you.

Ijtihad Network: having been exiled from Iran, Imam Khomeini stayed in Turkey for a while and then he was transported into Najaf, Iraq. When living in Najaf, he tried to make the Najaf seminary aware of the then current status quo of the Muslim nations and the conspiracies which were being organized by the bullying states against Muslims, opposing the ignorance of the seminary of such matters hitherto. He, therefore, held some meetings with such grand Ayatollahs as Mohsen Hakim, Shahroodi, and Sayyid Abolqasem Khoie in that regard.

Having performed the Maghrib and Isha prayers, Imam Khomeini together with a group of seminary students and some of his companions, left Ayatollah Broujerdi’s seminary school on October 19, 1965 to visit the Grand Ayatollah Hakim, the then Marja of Iraqi people.

As for the death anniversary of the Grand Ayatollah Khomeini, the Ijtihad Network presents the story of that historic meeting. It should be noted, however, that from Jurisdictional point of view, they say the same thing, i.e. when there exists the required conditions and such forces who are prepared to give their teeth for their goal, one should fight to martyrdom; in contrary, if such conditions do not exist, one should attempt to preserve the religion per se and wage a soft war.

Examining the evidences indicating the necessity for sparking an uprising against the regimes of their time was the subject of debate between Imam Khomeini and Ayatollah Hakim. Imam argued that conditions were ripe in the then Iran and Iraq for an integrated Shiite revolution and that the Maraji of Iran and Iraq could make a concerted effort to do so, but Ayatollah Hakim did not consider the conditions as favorable for such a revolution.

As for the Iraq, Ayatollah Hakim might have been right because the brutal suppression of the 1920 uprising by the Iraqi regime had discouraged the fighters and made the people retreat from their goals.

Having treated Ayatollah Hakim with common courtesy, Imam Khomeini told him that “I hear you were sick. You had better travel to Tehran for treatment while getting closely in touch with what was going on there and what difficulties Iranian people were undergoing. When the late Ayatollah Broujerdi was alive, I took his indifference towards the despotic regime of Iran as positive and told myself that he might not have received the real authentic news of the status quo. I think the same about you and believe that you may not have been receiving the news of the awful crimes committed by the regime, or you would have not remained silent. They celebrated the 25th anniversary of the Pahlavi monarchy and made these poor people pay $400000 for its costs, having some 800 girls and boys gathered in a place in the name of praying who did such shameful things that I’m ashamed to talk about”.

Ayatollah Hakim: I’m fully aware of all such matters.

Imam Khomeini: I don’t think so; if you really did, you would have not ignored them all.

Ayatollah Hakim: I did all I was religiously obliged to do; you are not aware of the world’s political affairs. Some opportunists are organizing such events so that they may reap their own benefits; we should so careful and cognizant.

Imam Khomeini: you may not know that the U.S.A and the Britain are going to destroy the Muslim governments and mop them off the face of the earth and they have currently started its procedures from Iran. They are reaping all the benefits derived from Iran’s rich resources and are intending to suck the blood of all those nations. We must be wary of all these things; we need to wake up, and that was why we have risen up. Muhammad Reza Pahlavi does not believe in Islam at all.

Ayatollah Hakim: yes, you are right, but the way you resisted against and opposed them was not correct, for we don’t have power and weapons. Our weapons and power are actually these ordinary people. And these people are mostly turncoat; they follow the wind (i.e. they come and go with the wind). We have gained some experiences from the 1920 revolution in Iraq and we know that how we were treated by the Britain, what the outcome of the uprising was and where our revolution led to. We should act very cautiously; Muslims might get humiliated and destroyed with the slightest negligence. I consider myself responsible concerning these issues. As I myself investigated, some of the matters you mentioned are not as you stated.

Imam Khomeini: Of course I did perform nothing without full investigation and pondering. I have definitive proofs.

Ayatollah Hakim: What could be done so? Would it be effective?

Ayatollah Hakim: If it would also be logically feasible and get done rationally, it would be good.

Imam Khomeini: it would certainly be effective, as we already saw its effects. By action, I mean rational action and no irrational action is intended at all. I mean an action led by the clergies and the wise men of the nation.

Should we make any radical move, we would not be followed by people. They are not mad keen on religion.

Ayatollah Hakim: they won’t follow us. They are fond of material desires.

Imam Khomeini: As I already told you, the people proved their manliness, fidelity, and sincerity in Khordad 15th uprising.

Ayatollah Hakim: If we rise up and anyone ever hurts, if it causes upheaval, we would be railed and criticized by people.

Imam Khomeini: When we rose up, we saw nothing but greater respect and reverence and whoever neglected in this regard, he/she was treated coldly by the public and lost his respect among them. When I was living in exile in Turkey, I visited a village whose name skips my mind right now. I was told by its residents that when Ataturk started to implement his anti-religion plans, Turkish mullahs gathered together and took some measures against Ataturk’s decisions. Ataturk, then besieged the village in response and killed 40 of them. When I heard the story, I felt ashamed, thinking about the fact that those Sunni mullahs, when recognized that Islam was being threatened, sacrificed their lives, losing forty of their fellow clergies, but we Shiite mullahs have not suffered any wound (no me, not you, not anyone else) in the path of Islam while it has been endangered so greatly. It is really shameful.

Ayatollah Hakim: What should be done? I should feel certain that it may be helpful. How effective is it to merely sustaining casualties?

Imam Khomeini: There two types of anti-religion actions. Someone like Reza Shah acted against religion and said that I did as I pleased but he never attributed his such actions to Sharia. Thus any opposition to his measures in this regard was done based on the principle of forbidding what is wrong (النَهي عن المُنْكَر). On the contrary, the incumbent Shah attributes all his anti-Quran and/or anti-religion actions to the Sharia, claiming that the Quran teaches us the same, or that what I say has been derived from the Quran, etc. This is a significant alteration which will fundamentally damage the religion and it could not be tolerated; we should sacrifice ourselves in this way. Let it be recorded in history that when Islam was attacked, Shiite mullahs rose up and some of them were killed.

Ayatollah Hakim: What’s the use of such an event being recorded in history? Our measures should bear some fruits!

Imam Khomeini: How do you say it is ineffective? Didn’t the uprising of Imam Hossain (A.S) offered an efficient service to the history? And what great benefits do we get from his uprising?

Ayatollah Hakim: What would your answer be to Allah for this bloodshed?

Imam Khomeini: Why did Imam Hussein (A.S) rise up and get himself and his companions martyred? He did so to preserve Islam. So, if you are right, he should also be criticized for his action with the same logic!

Meanwhile Ayatollah Hakim got angry and replied angrily: hey man! Do you compare yourself with Imam Hussein (A.S)? He was missioned by Allah, possessed of divine knowledge, and it was required of any Moslem to obey him. Why don’t you mention Imam Hassan (A.S)? Whenever you want to do something and intend to have a blood shed, you refer to Imam Hussein (A.S). One would be deemed entirely responsible before Allah if he/she has an innocent blood shed.

Imam Khomeini: If Imam Hassan (A.S) had as much followers as you have today, he would have risen up against the caliphate of his time. At first, he staged an uprising but when he learned that his followers had been bribed, he dismissed his decision to follow it up; but you currently have followers in all Muslim countries who obey you in their religious matters.

Ayatollah Hakim: I don’t see anyone who would be ready to follow me through if I ever decide to take any action.

Imam Khomeini: If you ever take action and rise up, I would be the first to follow you.

After a few moments, Imam Khomeini sat up and was ushered to the door by the Ayatollah. He left there to go to the houses of Ayatollah Khoie and Ayatollah Shahroudi in turn. The meeting with Ayatollah Hakim lasted for 20 minutes, attended by the late Sayyid Yusuf Hakim, some of the Ayatollah’s sons, and some of his companions. 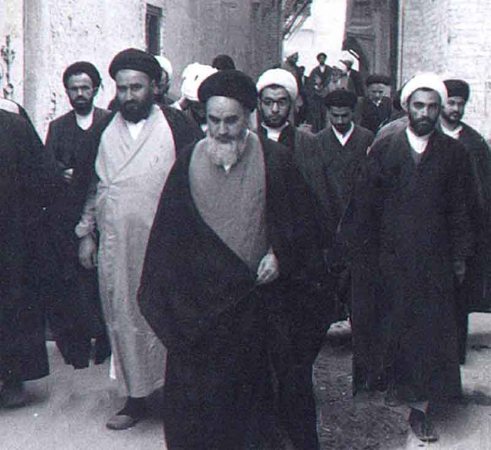 The details of the meeting have been reported by some individuals such as Muhammad Samami Haeri and the late Sayyid Sadeq Tabatabaie.

Previous Rays of the Sun: 83 Stories from the Life of Imam Khomeini+PDF
Next Religious Authority and Political Thought in Twelver Shi‘ism: From Ali to Post-Khomeini

When does Khums become Wajib?

Khums should be divided into two parts. One part is for the Sādāts which should be given to a sayyid who is poor, or orphan or who has become penniless during journey. The other portion of...