Home / Extremism / A Review on Destroying the Graves by Wahhabism & ISIS 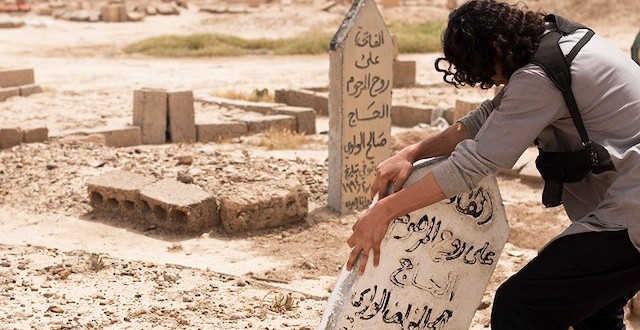 A Review on Destroying the Graves by Wahhabism & ISIS

Amongst the matters about which the Wahhabis are most sensitive is the matter of renovation of graves and construction over the graves of Prophets, Imams and the pious ones.

This matter was at first initiated by Ibn Taymiyya and his famous student Ibn al-Qayyim and they gave their verdicts (fatawa) in prohibiting the construction of a structure and the necessity of its destruction.
Ibn al-Qayyim in his book Zad al-ma’ad fi huda khayr al-‘ibad says as such:

“It is obligatory to destroy the structure constructed over the grave and after gaining power for their destruction it is not permissible to reinstate them even for one day.”
Ibn Taymiyya (1263–1328), one of the most famous medieval Islamic jurists and theologians, whose influence is still palpable in current Sunni discourse. Ibn Taymiyya spent a large portion of his life in prison for his teachings; his last imprisonment was caused by his issuance of a legal opinion reportedly denouncing the visitation of the Prophet’s grave.

Ibn Taymiyya was defeated by his opponents, the ulama of Egypt and Syria, and died in prison together with his legal opinions condemning grave visitation and the belief in intercession. Despite his failure to prevail in his lifetime, however, Ibn Taymiyya left an influential legacy for subsequent generations—who, in the following centuries, still felt impelled to engage in similar debate, whether in refutation of his arguments or in defense of them. His spiritual legacy, perhaps oversimplified and whether justifiably or not, found a fertile ground in the person of Ibn ‘Abd al-Wahhab and has also been appropriated by today’s Salafis.
In the year 1344 AH when the Sa’uds had gained control over Mecca, Medina and its surroundings, they planned a pretext for destroying the graves of Baqi’ and the traces of household and companions of the Holy Prophet (s). By getting verdict (fatwa) from the scholars of Medina they wanted to pave the way for demolition and preparing the minds of the people of Hijaz who were never in favour of such action.
For this reason they sent the Chief Judge of Najd, Sulayman bin Bulayhid towards Medina for the purpose of deriving benefit from the scholars of that place regarding this matter. Thus he planned the questions in such a manner that its answers (as per the viewpoint of the Wahhabis) were hidden in the questions itself. And in this way he declared to the muftis that their replies should match the answers which had come in the questions; otherwise they would be called as polytheists and be killed if they would not repent.
Incidentally, after taking the verdict from fifteen scholars of Medina and publishing it in Hijaz, the destruction of the traces of the household of the Prophet (s) began on the 8th of Shawwal of the same year.
Sulayman bin Bulayhid says in his questions: 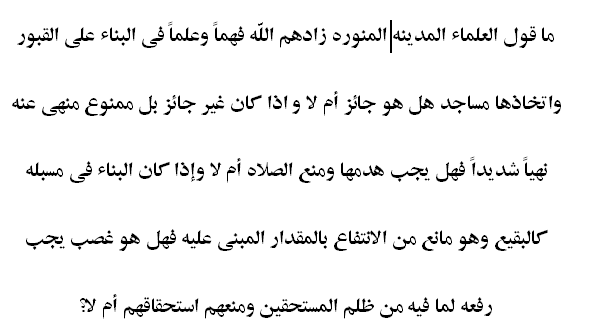 “What are the views of the scholars of Medina who, may God increase their knowledge and insight, about construction over the graves and setting them as mosques? Is it permissible or not? And if it is not permissible, and is strictly prohibited in Islam, then is it necessary and compulsory to destroy them and prevent the people from reciting prayers near it or not?”
If in one endowed (waqf) land like Baqi’ construction over the grave becomes an obstacle from making use of those sections which are over that, then is this act not usurpation of a portion of the waqf?
The scholars of Medina under threat and compulsion gave replies to the questions of Shaykh as follows: 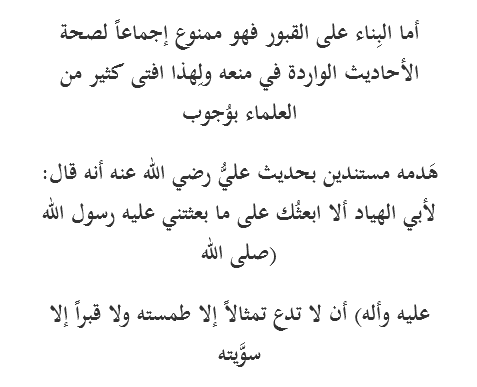 Construction over the graves is forbidden. Based on some traditions proving its prohibition, a group have given verdict (fatwa) for the destruction of the same. In this matter they have made use of the tradition which Abu al-Hayyaj has narrated from ‘Ali (r). The latter told him – I am entrusting you with a work which the Messenger of God (s) had entrusted me with the same. Don’t see any picture but that you erase it and don’t see any grave but that you level it.
Shaykh Najdi in an article, which was published in the newspaper Umm al-Qura No. Jamadi al-thani 1345 AH, says:
Construction of dome and structure was in vogue from 5th century AH.
These are a few examples of the sayings of Wahhabis about renovation of graves and mostly they put forth two reasons in support of their sayings:
1. Consensus of the scholars of Islam about its being prohibited.
2. Tradition of Abu al-Hayyaj from Ali (‘a) and some other similar ones.
It should be known that our discussion at present is about renovation of graves and construction of bower or ceiling over them. However the matter of ziyara – visitation to graves – will be discussed separately.
For making the matter clear, we will discuss this issue from three perspectives:
1. What is the view of the Qur’an regarding this matter? Can we derive the judgement from the Qur’an?
2. Does the Islamic ummah in reality have consensus in its being prohibited or is it that in all the Islamic ages the matter was something else and renovation of graves and construction of house was in vogue during the period of the Holy Prophet (s) himself and his companions?
3. What is the derivation of the tradition of Abu al-Hayyaj, Jabir, Umm Salama and Na’im which the Wahhabis utilise?

The First Destruction of Baqi’ Cemetery
From 1205 AH to 1217 AH, the Wahhabis made several attempts to gain a foothold in Hijaz but failed. Finally, in 1217 AH, they somehow emerged victorious in Taif where they spilled the innocent blood of Muslims. In 1218 AH, they entered Makkah and destroyed all sacred places and domes there, including the one which served as a canopy over the well of Zamzam.

In 1221, the Wahhabis entered Madina to desecrate al-Baqi as well as every mosque they came across. An attempt was even made to demolish the Prophet’s tomb, but for one reason or another, the idea was abandoned. In subsequent years, Muslims from Iraq, Syria, and Egypt were refused entry into Makkah for Hajj. King Al-Saud set a precondition that those who wished to perform the pilgrimage would have to accept Wahhabism or else be branded as non-Muslims, becoming ineligible for entry into the Haram.
Al-Baqi was razed to the ground, with no sign of any grave or tomb whatsoever. But the Saudis were still not quite satisfied with doing all of that. Their king ordered three black attendants at the Prophet’s shrine to show him where the treasure of valuable gifts were stored. The Wahhabis plundered the treasure for their own use.
Thousands of Muslims fled Makkah and Madina in a bid to save their lives and escape from the mounting pressure and persecution at the hands of the Wahhabis. Muslims from all over the world denounced this Saudi savagery and exhorted the Caliphate of the Ottoman Empire to save the sacred shrines from total destruction.
Then, as it is known, Muhammad Ali Basha attacked Hijaz and, with the support of local tribes, managed to restore law and order in Madina and Makkah, dislodging the Al-Saud