Providing a comprehensive and accessible examination of Shari’ah Law, the book examines the sources, characteristic features, and schools of thought of a system often stereotyped for its severity in the West.

Notwithstanding its title of Shariʻah Law: An Introduction this volume provides a progressive and graduated treatment of the Shariʻah. The first three chapters offer an introductory discussion which expounds the sources of Shariʻah, its characteristic features, as well as its leading schools and madhhabs. The succeeding four chapters on ikhtilaf (juristic disagreement), the maqasid (goals and objectives), legal maxims, and ijtihad (independent reasoning) take the discussion a step further, and the approach here is not necessarily confined to introductory and descriptive treatment of the subject. From then onwards the discussion is taken to a more advanced level in its treatment of the Shariʻah and the principle of legality, Shariʻah and democracy, and the role and place of Shariʻah -oriented policy ( siyasah shari‘iyyah ) in our understanding of the Shariʻah.

Providing a comprehensive and accessible examination of Shari’ah Law, this well considered introduction examines the sources, characteristic features, and schools of thought of a system often stereotyped for its severity in the West. In a progressive and graduated fashion, Mohammad Hashim Kamali discusses topics ranging from juristic disagreement to independent reasoning. Also broaching more advanced topics such as the principle of legality and the role and place of Shari’ah-oriented policy, Kamali controversially questions whether Islam is as much of a law-based religion as it has often been made out to be. Complete with a bibliography and glossary, and both a general index and an index of Arabic quotations, this wide-ranging exploration will prove an indispensable resource for Islamic students and scholars, and an informative guide to a complex topic for the general reader.

Previous The Islamic Perspective on Adoption Children
Next Can Islam Protect the Environment?? 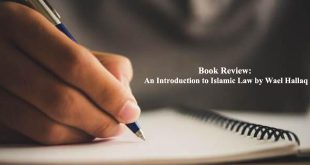