Home / All / Fiqh & Socitey / Why Pakistani Shias Were ‘Detained’, Reported ‘Missing’ on their Return from Pilgrimage!? 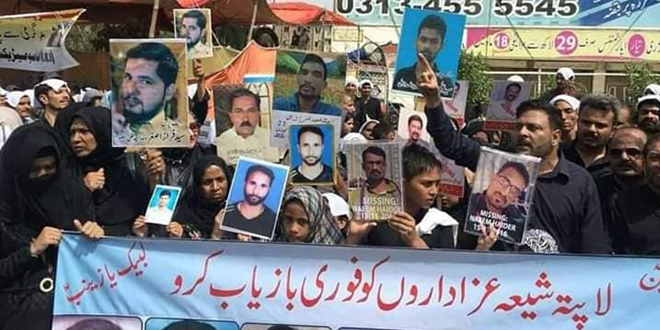 Why Pakistani Shias Were ‘Detained’, Reported ‘Missing’ on their Return from Pilgrimage!?

Between 120 and 160 Pakistani Shias were ‘detained’ and reported ‘missing’ in the past several years. Many were taken away on their return from Iran, Iraq or Syria.

On the morning of 22 January 2017, residents of Orangi Town in Pakistan were woken up by the engine sounds of double cab vehicles entering the area. Security personnel were looking for young men, in this low-income settlement, who had returned from Syria.

They found Sayyid Arif Hussain, a 28-year-old Shia, who had come back from a pilgrimage to the Sayyidah Zaynab shrine in Damascus. Sayyid, a physiotherapist by profession, was led away by a dozen armed men, even as his 80-year-old mother Shamim Ara kept begging them to tell her where he was being taken or what allegations were against him. Two years since, he hasn’t returned home. 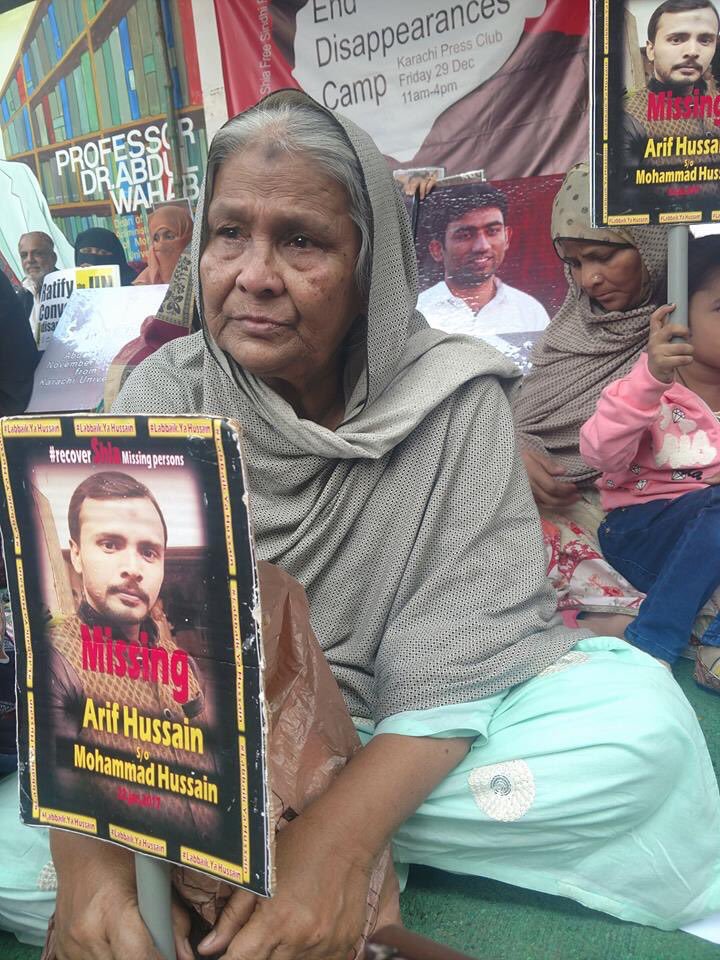 Sayyid is one among 120-160 Pakistani Shias who were ‘detained’ and subsequently reported ‘missing’ in the past several years. Many were taken away on their return from Iran, Iraq or Syria.

“No one is telling us where he is. Had I known that the price of visiting Bibi’s shrine would be this, I wouldn’t have let him go. All I have been doing in the past two years is take part in protests against such disappearances. They have labelled Sayyid a terrorist. But he cannot even look at the sacrifice of animals during Eid ul Adha,” said Ara.

Kin of missing persons belonging to the Shia community had staged a month-long protest in front of President Arif Alvi’s residence in Karachi’s Muhammad Ali Society on 28 April but to little effect.

On 18 June, 64-year-old Allah Dino was arrested from Karachi airport when he had returned from Karbala in Iraq. He remains missing to this date. Hussain Ahmed Hussaini, a 23-year-old who was reported missing for several months was recovered in May only to be sent to jail. His mother passed away on 19 June.

There have been reports of these men being detained and kept inside torture cells but the government has been tight-lipped about it. In an interview to BBC, a Shia man, who did not wish to be identified, had said how he was kept in a “small, dark cell”, “badly tortured” and given electric shocks by security services. He also said how he was repeatedly interrogated about the Zainabiyoun Brigade — a secret militia in Syria which is thought to be fighting on behalf of President Bashar al-Assad’s regime.

Shia activist Samar Abbas, who is known to be critical of Pakistan’s military establishment, was similarly taken away in January 2017 and held for 14 months. He, along with a few other bloggers, was released after a public outcry post March 2018. Abbas’ brother-in-law (name not known to ThePrint) was also detained and is still reported to be missing.

“They officials kept asking if I had taken money from Iran and was involved in sending young Shia men to battlefields in Syria. It took 14 months for me to prove that I was innocent,” Abbas said.

Pakistanis who needed to be ‘silenced, disappeared’

History tells us that Shia Muslims were not always ‘persecuted’ in Pakistan. For instance, the funeral procession of Muhammad Ali Jinnah in 1948 was carried out under a flag which had the inscription of “Ya Hazrat-e- Abbas” — a Shia religious symbol.

So what happened in the years after that turned the state against Shias, who constitute roughly 20 per cent of its total population?

Things began to change when Iranian leader Ayatollah Khomeini brought about the Islamic Revolution in 1979. Pakistan’s military-dictator leader General Zia-ul Haq was cautious to stop the revolution’s spread in the country. But the state also silently nurtured Islamic extremists under the new order named ‘Nizam e Mustafa’ or Shariyat rule.

Pakistan saw the birth of an anti-Shia terrorist group Anjuman-e-Sipah-e-Sahaba (ASS) in 1985 that openly declared Shias to be “infidels”. Under Zia, a Shia uprising took place which demanded that all Muslims give ‘zakat‘ — a religious obligation of tax under Islam — which the community did not believe in. They also opposed to the mandatory Sunni Islamic education in schools.

In the years to come, terrorist groups targeting Shias began to flourish under the state’s patronage.

In 2001, a killing spree of Shia doctors was carried out by Lashkar-e-Jhangvi (LeJ), the militant wing of Sipah-e-Sahaba Pakistan (SSP). A total of 52 physicians were killed in targeted attacks till 2018. Killing doctors was also a way of sending out the message that the community cannot ‘progress’ in Pakistan. Other high-profile Shia deaths include the killing of Shaukat Mirza Ehteshamuddin Haider, managing director of Pakistan State Oil.

According to data collected by the South Asia Terrorism Portal (SATP), around 2,693 Shias were killed until June 2018, while 4,847 sustained injuries in targeted attacks and bomb blasts.

In 2018, the state had lifted the ban on Ahle Sunnat Wal Jamat (ASWJ), the anti-Shia outfit while also unfreezing assets of its chief Maulana Ahmed Ludhianvi.

Oppression and persecution of Shias further increased with Pakistan relying on Saudi Arabia to end its economic crisis. When Saudi Crown Prince Mohammed bin Salman visited Pakistan in March 2019, the Federal Investigiation Agency (FIA) issued a notification to relevant authorities to take action against journalists and Shia groups that were criticising the visit on social media.

Human rights groups working in Balochistan claim that the number of missing Baloch men in the region is nearly 20,000. These disappearances are also attempts to ‘tame’ a population which is on the verge of starting an uprising against the state that calls extremist elements “its own”.

Speaking about the sit-in protest in April-May, Rashid Rizvi, chairperson of the Shia Missing Persons Movement, said, “The ruling government had called us for negotiations. An intelligence officer was also present. We were told that a fact-finding committee will be formed to look into the matter. They wanted us to end the protest. I was also forced by two other Shia leaders to give in to demands of the government but I did not.”

Rizvi said the authorities then launched a crackdown against Shias.

“Police would randomly lift shirts of young men to see if they had marks from ‘matam‘ (self-flagellation), check their National Identity Cards and arrest them,” he said, adding another round of negotiations had begun following condemnation by human rights groups.

“We gave them a list of 47 Shia men from Karachi, out of which they said four have been located and will be released. At first, it appeared that the sit-in was a success but what happened next undermined out victory. The agencies started calling some other Shia men for negotiations who sided with them,” Rizvi added.

Many families were forced to take back petitions filed in the Sindh High Court and threatened, Rizvi said.

During the protest, a high-ranking police officer had also called a press conference to produce five men who were allegedly getting funds and training from Iran. He claimed the suspects got Rs 40,000 from the neighbouring country even though he failed to produce any substantial evidence.

The presser was contrary to what Pakistan Armed Forces spokesperson and Director General Inter- Services Public Relations Asif Ghafoor had said about “excellent coordination with Iran”. Ironic that Iran can be termed a ‘friendly’ nation if it was involved in fanning sectarian violence in Pakistan using their ‘loyalists’ in the country. The Grand Ayatollah Sistani, the Supreme Religious authority for Shia Muslims, responded to a religious question about the conditions for holding congregational prayers in mosques as...