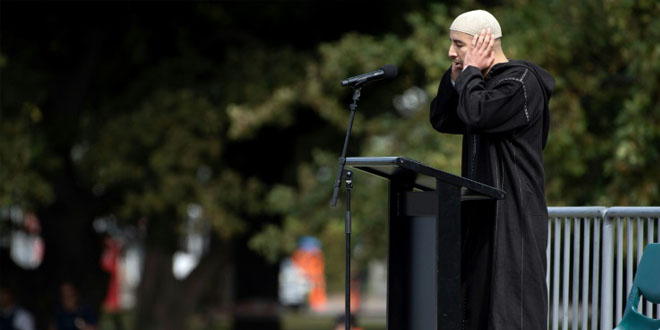 The Islamic call to prayer, the adhan, rang out across New Zealand on Friday afternoon as thousands gathered to honor the 50 people gunned down at two mosques in Christchurch  one week ago.

Tens of thousands of people in New Zealand’s Christchurch have been joined by Prime Minister Jacinda Ardern to mark a week since the massacre of worshipers at two mosques in Christchurch.

The Muslim call to prayer was broadcast around the country and a two-minute-silence was observed on Friday at almost the same time when Australian terrorist Brenton Tarrant opened fire on worshipers during Friday prayers at two mosques in Christchurch.

After the silence, Prime Minister Ardern addressed some 20,000 mourners, who gathered at Hagley Park, a short walk from the Al Noor mosque — where most people were killed in the first attack.

“New Zealand mourns with you. We are one,” said the prime minister, wearing hijab — the Muslim women’s modest clothing.

Ardern, the world’s youngest female head of government, has been widely praised for her response to the tragedy.
She has impressed many, both at home and overseas, after she personally met with the grieving and desperate families of the victims on Saturday.
Ardern has also been praised for taking speedy steps to tighten gun laws in order to make New Zealand “a safer” country. She said on Monday that her cabinet members had agreed “in principle” to reform gun laws, which she said would be announced within days.
The terrorist was charged with one account of murder at Christchurch District Court on Saturday. He was remanded without a plea and is due to return to court on April 5. Police say he is likely to face further charges.
Many women across New Zealand — with a population of just over 1 percent of Muslims — also wore headscarves on Friday as a sign of support to the community, and a #headscarfforharmony movement was trending on Twitter.

Salwa Mustafa, who lost a husband and son in the massacre, said the attack made the community stronger.

“If they think that they are destroying us, they are wrong,” Mustafa told a press conference as she held the hand of her remaining son, who was shot in the leg during the onslaught.

“What’s happened makes us stronger, because we are not terrorists,” she said.

“And I hope the whole world now can understand the real Islam, the reality of Islam,” she added.

In another development on Friday, police said it had granted a gun license to the terrorist after a team inspected his home and interviewed him back in October 2017.

It said that Tarrant had applied for a license in September 2017.

“One of the steps to gaining a firearms license is a home visit to meet the applicant in person and inspect the security of their property,” said a police spokesman.

The police team had interviewed the terrorist and carried out a “security inspection” of his home back then, he said.

“Following this, all the available information was reviewed and the license was approved in November 2017,” the spokesman added.

The weapons he had “legally purchased,” including two semi-automatic rifles, two shotguns and a lever-action firearm, were used in the mosque massacre.

Former head of firearms control Joe Green, however, said police did not follow the correct procedure in granting the terrorist the license.

Green said he was told by two people who knew Tarrant primarily through online chat room contact, that “he declined to be interviewed at his home, is what I’m advised, and was interviewed at his place of work and it would seem from that no home visit may have taken place.”

“So that means police didn’t have a chance to have a look at his living situation,” Green said adding that home visits provide valuable insights.

On Thursday, Prime Minister Ardern announced measures that will come into force by April 11 to ban military-style semi-automatic weapons and assault rifles.

“In short, every semi-automatic weapon used in the terrorist attack on Friday will be banned in this country,” she said.

In the meantime, no one will be able to purchase the weapons from now without a permit from the police, she said.

“This is an interim measure to ensure the trade of these weapons ceases from 3:00pm today,” Arden added.

She also assured to introduce a buyback scheme to ensure “fair and reasonable compensation” was paid to gun owners.

Police Commissioner Mike Bush said in a statement that police “absolutely” believe they stopped the suspect “on the way to a further attack.”

“Lives were saved,” he said, but declined to go into detail to not “traumatize others.”

He also said that all 50 bodies of the victims had been identified and would be turned back to the families for burial,

“This means that all victims are now able to be released to their families,” he added.

Islamic tradition calls for a deceased person to be buried as soon as possible after death.

Police also said that the mosques, which came under attack, will also be handed back to the Muslim community on Saturday. 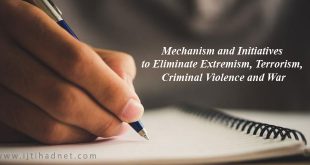 At a gathering on Friday to mark one week since the mosque attacks in Christchurch, women of all faiths were seen wearing headscarves similar to the traditional hijab worn by...