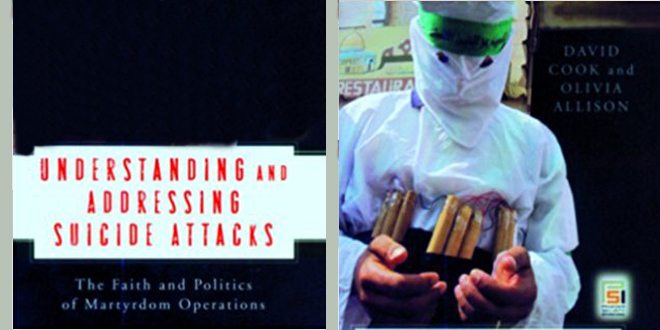 The book “Understanding and Addressing Suicide Attacks: The Faith and Politics of Martyrdom Operations” Provides readers with a better understanding of the underlying religious and historical basis for Muslim suicide attacks and makes recommendations for dealing with them when and where they occur.

During the past several years, Americans have witnessed the frequent occurrence of suicide attacks by radical Muslim groups. The public has wondered what drives someone to kill himself specifically in order to wreak havoc and destruction. While other works address the subject, many entirely ignore the ideological, religious, and cultural appeal of suicide attacks, and none can adequately speak to why certain groups choose to use suicide as a weapon while others do not. Beginning with a careful consideration of the religious and historical reasons, and the justifications that perpetrators find therein, for suicide operations, the authors reveal how radical groups have co-opted various aspects of their faith to provide fuel for their current activities.

Established policy makers seem helpless to confront this destructive terrorist activity, often implying that countermeasures are ineffective and seeming to say we will just have to wait out the phenomenon. Even such a well-documented policy report as the 9/11 Commission’s report failed to address the root of suicide attacks, only critiquing technical aspects of the U.S. security system. Focusing on specific attacks, their roots, their perpetrators, and their outcomes, the authors are able to shed light on this resurgence of radical religious forces that encourage the use of such tactics, and to propose new initiatives and approaches to handling such attacks before and after they occur.

Written by subject experts and well-known researchers, the books in the Praeger Security International series give readers access to carefully considered and highly informed viewpoints on the critical security issues that threaten to destabilize our world. With titles authored by diplomats, first responders, economists, journalists, civil servants, military leaders and combatants, legal experts, psychologists, and other knowledgeable specialists, these books offer in-depth reflections, thorough analysis, and international perspectives that are unavailable in mass media. These titles represent an invaluable resource for students and researchers as well as anyone who seeks a deeper understanding of the complex issues that affect our lives and future.

Title: Understanding and Addressing Suicide Attacks: The Faith and Politics of Martyrdom Operations