Interfaith Engagement in Theory and Practice Was Held in Switzerland+Pics

Between 16th – 21st March, 2017, a group of twenty-two people from eight different cities across Canada, UK and the US took part in a 5-day intensive training course on ‘Interfaith Engagement in Theory & Practice’ in the cities of Geneva and Montet, Switzerland.

The programme was conducted by the Institute of Islamic Studies of the Islamic Centre of England (ICE), under the direction of Dr. Mohammad Ali Shomali, in collaboration with the Ecumenical Institute of the World Council of Churches (WCC), as well as the Focolare Movement.

We arrived at the Ecumenical Institute at Bossey, Geneva – the international centre for encounter, dialogue and formation of the World Council of Churches. Founded in 1946, the Institute brings together people from diverse churches, cultures and backgrounds for ecumenical learning, academic study and personal exchange. It welcomes students and researchers from around the world for periods of residential academic study, specializing in ecumenical theology, missiology and social ethics. The diverse teaching faculty is made up of staff from diverse theological, cultural and confessional backgrounds. We were warmly welcomed by the Institute’s director and Father Lawrence Iwuamadi, a professor at the Ecumenical Institute, followed by a tour of the grounds and the Chapel. In the evening, Sheikh Shomali delivered an insightful talk on the preliminaries to engaging in interfaith dialogue and its significance in the three Abrahamic faiths. 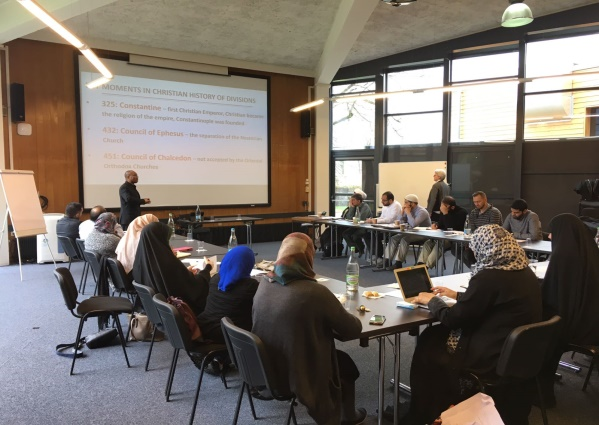 After congregational prayers, a beautiful recitation of Dua ‘Ahd, a refreshing walk to watch the sunrise over the Alps and a hearty breakfast, we arrived at the World Council of Churches (WCC) headquarters. We were greeted by the general secretary, Rev. Dr Olav Fykse Tveit whilst standing before a WCC fellowship list showing the 348 member churches that represent over half a billion Christians around the world.

Father Martin Robra, Director of WCC and the Ecumenical Movement, then gave us an informative tour of the building, taking us through the history, mission, activities, and structure of the WCC. We visited their stunning chapel that caters for different religious Christian practices and were presented with artefacts, each with their own significant Biblical stories. The second half of the day was spent on a guided tour of the United Nations Geneva headquarters, where we saw the various meetings rooms. As we walked through the hallways, we passed works of art gifted to the UN by each member country. Throughout the tour, our guide talked about the current activities of the UN and its history. A short bus ride took us to see the 193 flags representing the member countries of the UN, whilst opposite we stood next to the famous Broken Chair – a monumental sculpture symbolising opposition to landmines and cluster bombs, to act as a reminder to politicians and other visitors.

Back at the Ecumenical Centre, we had short presentations delivered to us by various WCC work groups. These included: 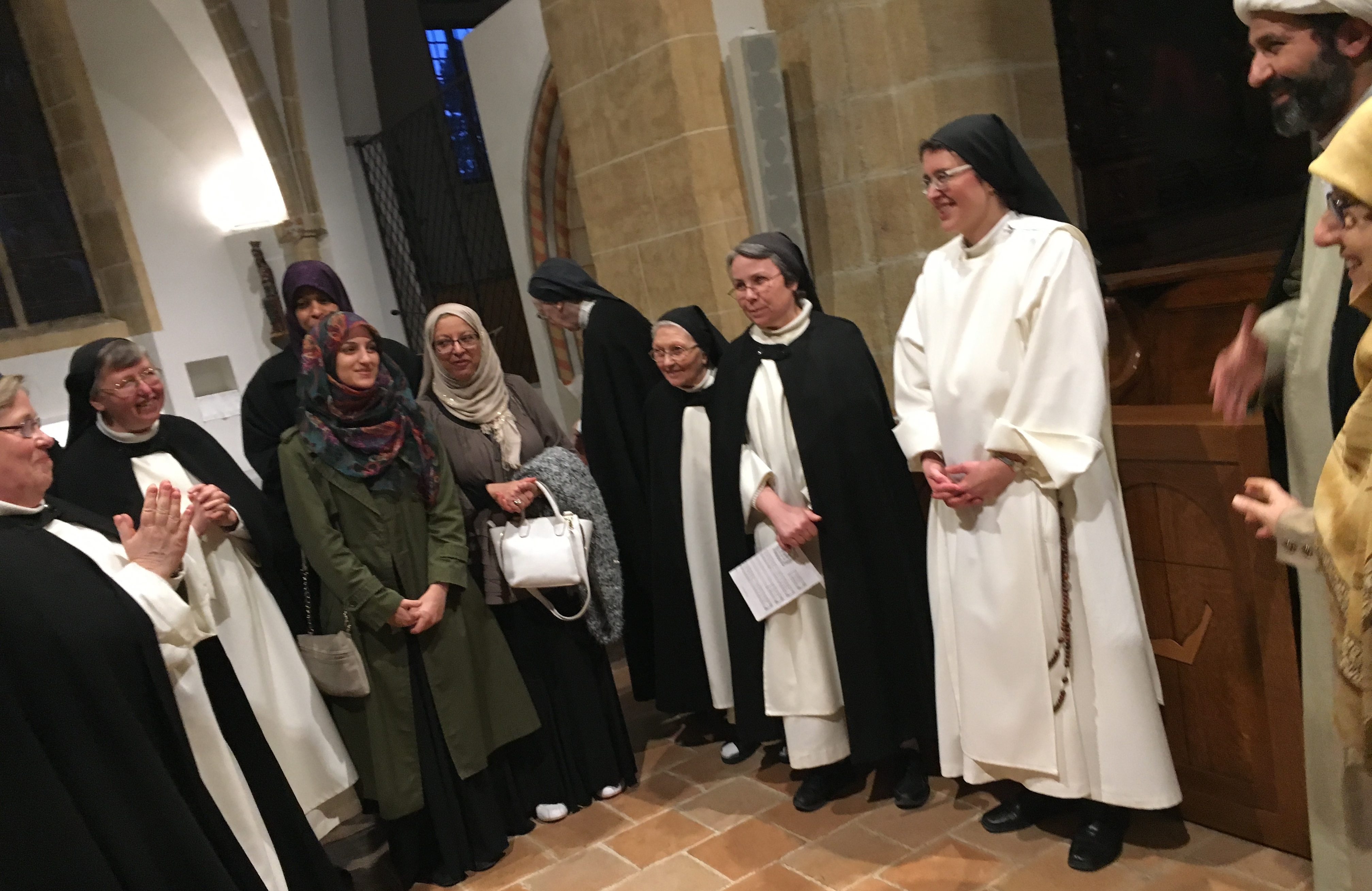 Our first talk, delivered by Sheikh Shomali, was about Islam and other religions with a focus on the Abrahamic religions. This was followed by Professor Dr. Dagmar Heller (a Protestant) and Father Lawrence (a Roman Catholic) who gave us an excellent introduction to Christianity and a run through its history, before accepting our questions. We then headed into the city centre for a guided tour of the International Reformation Museum, St. Peter’s Cathedral and the Reformation Wall in Geneva’s Old Town. The International Museum of the Reformation (MIR) in Geneva retraces the history of the Reformation movement initiated by Martin Luther, John Calvin and others. Through objects, books, manuscripts, paintings and engravings, the museum tells the story of the movement that spread in part from Geneva during the 16th century and grew into one of the main families of Christian churches. St. Peter’s Cathedral (Saint Pierre Cathedral) is over 850 years old, and Geneva’s main church. It combines various architectural styles from Gothic to Ancient, as it has been rebuilt over the centuries. Since the 16th century, the Cathedral has belonged to the Reformed Church. We then stepped into the Chapel of the Maccabees. Built in the 15th century, the colourful Gothic influenced chapel has architectural arches, high ceilings and a stunning pulpit. Before leaving, we shopped for some famous Swiss chocolate! As today was also the birth anniversary of Bibi Fatima (as), we were invited to attend a Shia Centre for congregational prayers, Sheikh Shomali’s majalis lecture about the importance of unity, ziyarat and a delicious dinner. As we left, all the ladies were given a beautiful white rose to celebrate Mother’s Day. It was a wonderful end to an amazing and beautiful day. 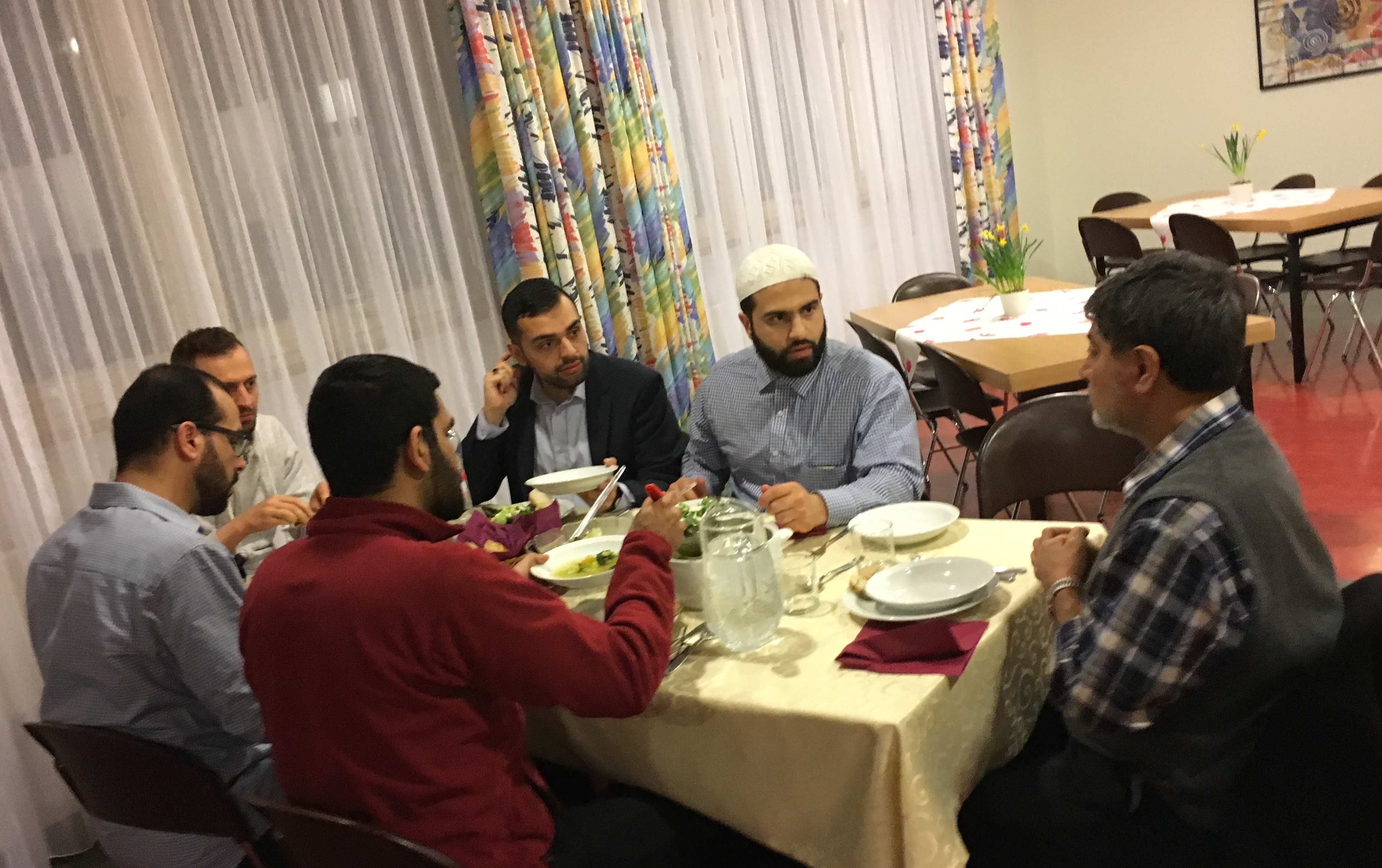 We had an interesting talk on the Christian approach to interfaith dialogue by Clare Amos (Director of Inter-Faith/Religious Relations). The talk by Sheikh Shomali concentrated on Muslim-Christian relations, followed by a group reflection. Afterwards, we observed Sheikh Shomali’s webinars for the Kawthar Learning Circle, which is an online platform for receiving live webinar lectures with participants from different parts of the world. We left the Ecumenical Institute and travelled to Montet with two Focolare members. Here we were led on a guided visit of Estavayer – a 13th century village that included the Medieval Church by the Parish Priest (Catholic) and the Convent of Dominican Sisters (Protestant), in which we were able to ask several questions. As we were still celebrating Bibi Fatima’s (as) birthday, Sheikh Shomali asked the Dominican Sisters at the Convent to say a short supplication (dua’) and then responded with a moving supplication of his own. It was very hard to say goodbye to the Sisters. Our last two days were very humbling, as we visited the Cittadella (little town) of Montet to stay with the Focolare. After a heartwarming welcome, they accompanied us on a tour around their grounds, showing us their daily works. They work together to produce products (office chairs, baby products, etc.) and the profits earned go towards helping the needy and maintaining the centre. They talked about their beliefs of God being love, the importance of unity, and its key role in the Focolare movement’s spirituality. We listened to members’ experiences and testimonies through video and dialogue.

We met those responsible for the centre in Montet, including a special moment with Palmyra, who was with Chiara when she founded the Focolare movement, and we witnessed her share words of wisdom with Sheikh Shomali. After a break with some residents of the Cittadella, we had a talk by Sheikh Shomali on the importance of interreligious dialogue and its aims and policies. The Focolare treated us with an evening celebration and beautiful performances. They encouraged us to reciprocate with on-stage introductions, a poem on unity and a beautiful recitation by Br. Mubarak Sami.

At the Focolare centre, we had met Pat Whitney (from London, UK) who helped us throughout with translation and communication, because the Focolare members primarily speak Italian. Discovering that it was Pat’s birthday, Sr Yasmin spent all morning creating beautiful fruit cakes to surprise Pat. It was wonderful to see her absolutely stunned and so thankful!

Sheikh Shomali’s last lectures involved sharing his wisdom and knowledge of the procedures and etiquettes when making interreligious dialogue, and delving deeper into the spirituality of unity. Our final lecture was spent in dialogue with those responsible for formation, where we each shared our own personal reflections on the whole experience and what we had learnt and would take away with us. It was hard to leave the people who had truly taken all of us into their hearts and given us such a wonderful experience.

We were awe-inspired by their open-heartedness to work cooperatively in building a more united world by following Jesus’ prayer to the Father – “May they all be one” (Jn 17:21). They highly respect diversity by focusing on dialogue as a method of building bridges and relationships of fraternity among different individuals, peoples and cultural worlds. 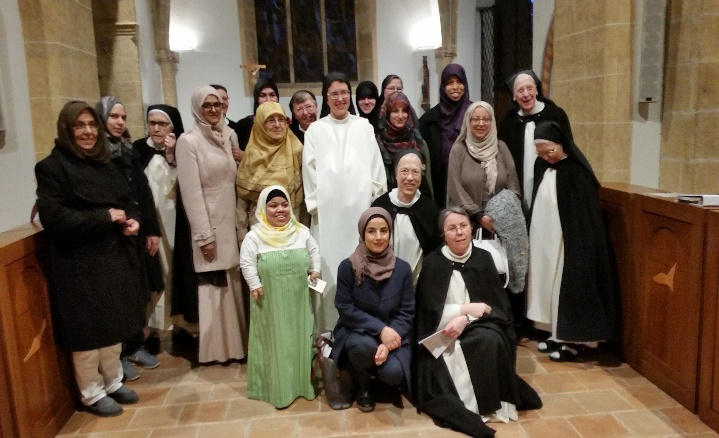 A Reconsideration of the Number of the Prophet’s Wars

The important question that arises is whether there were actually eighty-five clashes and conflicts between the Prophet and his companions on the one hand and his enemies on the....