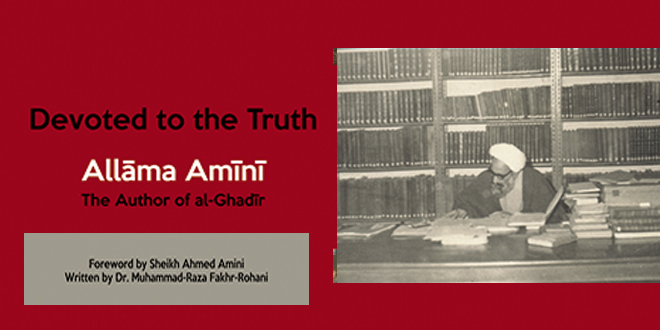 Book: Devoted to The Truth: Allama Amini, The Author of al-Ghadir

Allama Amini is most famous for his research project al-Ghadir which offers an in-depth analysis of the appointment of Imam Ali at Ghadir Khumm and the series of events that followed.

Born in Tabriz in 1902, Allama Abd al-Husayn Amini developed a passion for knowledge from a young age under the tutelage of his father. At aged 14 years, he moved to Najaf to pursue his studies further. There, he benefitted from some of the greatest scholars of his time. Dr. Fakhr-Rohani’s biography is the first of its kind written in English. It describes Allama’s early influences, analyses the research methods used in al- Ghadir, and relates anecdotes from those closest to him, thus uncovering the secrets behind Allama Amini’s devotion to the truth.

The eleven-volume Tehran edition of the late Allama Amini’s al-Ghadir has always had a special place in my father’s private library at home. My father is a cleric and we live in Qom, but as a child, I didn’t quite understand the discussions of the grown ups, and I was particularly perplexed as to why my father and his clerical friends and colleagues would talk so highly of al-Ghadir. My confusion didn’t last long; as I grew up and began learning some Arabic, I realized that the object of their fascination was not simply a book, but rather a highly specialized encyclopedia, of which only eleven volumes have been published. The more I turned its pages, the more marvels I discovered within it. What made al-Ghadir special was more than mere scholarship; I could see that the work was a token of the author’s ardent devotion to Imam ‘Ali’s Divinely-determined right to leadership, which has been inseparably linked with the historic event at Ghadir Khumm. By devoting his intellectual energy and enthusiasm to illuminating the right of Imam ‘Ali, the late Allama Amini undoubtedly received his reward from the unique personality about whom he developed his book. Today, it is unlikely that any conscientious researcher of Islamic doctrine and history, or any scholar who looks into the character of Imam ‘Ali could overlook Allama Amini’s al-Ghadir. In this way, a triad has been formed in which Imam ‘Alī, Ghadīr Khumm, and Allāma Amīnī are fundamentally bonded. It was some time after I had first become familiar with al-Ghadir that the ex-Baathist rule under Saddam Hussein collapsed, meaning that I finally had the opportunity to take my first pilgrimage to the sacred shrines of Iraq. It was in the winter of 2006 and the first night of our arrival coincided with the eve of Ashura. For much of our trip, we stayed in Karbala, where we were blessed with the honour of staying in the precincts of Imam al-Husayn’s sacred shrine. It was soon after we reached Najaf to visit the shrine of Imam ‘Ali that I enquired about the location of the famous library which Allama Amini had established in the city. The Imam Amir al-Mu’minin Public Library was close enough to the shrine, that I found it within a few minutes. Now, after several years, I realise that my first visit to the library had such a long-lasting impression on my mind that I cannot regard it as an ordinary trip; it was indeed a research pilgrimage in its own right. In retrospect, I feel that visit brought with it a revolutionary change to the course of my academic life. To this day, I vividly remember the welcoming atmosphere within the library. As soon as I entered, I encountered the familiar, heart-warming scent of scholarship, and I could feel the power of its founder’s ardent devotion to the house of Prophet Muḥammad ever-present in the aroma. Among the shelves crammed full of books, the oldest ones were bound in traditional Iranian and Iraqi leather bindings. These were the very same works that the late Allama Amini used to develop his own books; which he had acquired through his various trips to other and certainly much larger research libraries all around the world. During the days I was in Najaf, I used to visit the Library and became enchanted by its print holdings in various languages, from Arabic to Persian and English. The impact of scholarship displayed in this library seemed unique to any other I had experienced. Leaving Najaf at the end of my first trip proved a really painful experience. I knew I would miss Imam ‘Ali’s sacred shrine and the first library in Najaf to be named after him. Soon after returning home to Qum, I contacted a close friend who knew the youngest son of the late Allama, Dr. Muḥammad Amini, and I was able speak with him in Tehran. A few moments after hanging up the telephone, I received a call from another of Allāma’s sons, Sheikh Ahmad Amini, who had long been a resident in Qum. I met with Sheikh Ahmad at his house a few days later and our first meeting quickly developed into close friendship. Little by little, I came to know more about the character and career of the late Allama Amini, a man who devoted his life to the cause of promoting the ideals of the house of Prophet Muḥammad. For the most outstanding scholars, it is not only their books but also their lives which guide people. It therefore seems appropriate to attempt to tell the life story of Allama ‘Abd al-Husayn Amini, who was indeed an accomplished scholar and a true devotee to the house of Prophet Muhammad and an ardent scholar who devoted his life to the life of the first Infallible, Imam ‘Ali. It is believed that the present biography of Allama Amini is the first book-length sketch of his life in English. In producing this, my hope is that a wide international readership will be able to benefit from becoming familiar with the life of the Allama. My wish, then, is for readers to not only learn from the religious and scholarly life of Allama Amini, but also to be inspired by his character and benefit from his truth-seeking scholarship and research methodology. May the present work be reckoned as a token of my veneration for Prophet Muhammad and his infallible household and descendants, particularly the immediate successor to Prophet Muhammad and the Infallible Imam ‘Ali. Amen! .

A note on proper names and dates

Part One: The Beginning of Scholarship

Part Three: The Quest for Knowledge

Title: Devoted to The Truth: Allama Amini, The Author of al-Ghadir 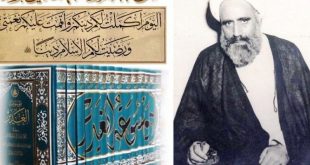 What Do You Know about Al-Ghadir Book?

“It has been said famously that on my parents’ wedding night when my mother’s uncle encouraged the bride and the groom to hold each other’s hands together, my father – now although he was an Allameh – bent down and kissed my mother’s hand in...