The Spiritual and Social Effects of Congregational Prayer

Congregational prayer and masjid attendance are an important aspects of the Islamic faith.

There are many traditions which communicate the enormous rewards of congregational prayer. For instance, Imam Khomeini (1993) relates the following tradition: “If there is one person following the prayer leader, the reward of the prayer (compared to that which is done individually) is 150 times more, for two people, the reward is 600x more, for three it is 1200x more, for four it is 2400x more, for 5 it is 4800x more, for six it is 9600x more, for seven it is 19200x more, for eight it is 36400x more…But if the number of the persons praying exceeds 10, nobody knows its reward except God.” It has also been narrated that the Prophet (s) said: “A single prayer in congregation is better than forty years of prayer at home.” (Nouri, 1987)

The social effects of congregational prayer and masjid attendance are found in the closeness and brotherhood between believers that stems from the congregation. (Qara’ati, 2000) When people meet in congregation they learn about each other’s lives, about each other’s struggles, and mutual love develops. (Rizvi, 1983) They also feel a sense of belonging in the community. How does this happen? When and how does friendship increase and a sense of belonging develop?

Krause (2016) attempted to answer this question in a study of Christians in the United States. Christianity is different than Islam, of course, but the social effects of congregation would be similar between Christian and Islamic communities. Krause hypothesised that (1) individuals who attend church more often will receive more support from church members; (2) people who receive more support will have more practical wisdom; (3) those with more practical wisdom will be more likely to provide emotional support to members of their congregation; (4) people who provide emotional support will be more valued by their coreligionists; and (5) individuals who feel they are valued by will be more likely to believe that they belong in the place where they worship.

The following is a diagram of these relationships: 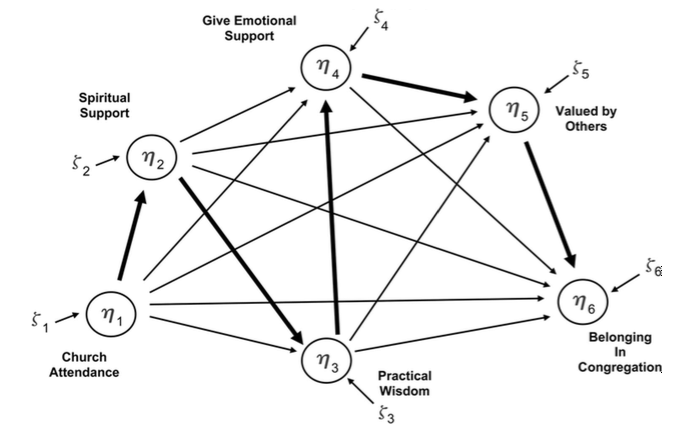 His research confirmed that people who attend church more often report that they received more spiritual support from other attendees. Furthermore, those who obtain such support have a higher level of practical wisdom than those who receive less spiritual support. Increased attendance of church services was also positively correlated with higher practical wisdom, but to a smaller degree. Then, those with more practical wisdom are more likely to provide emotional support which in turn makes them feel valued and grants them a sense of belonging. The following is a table of the results of his study: 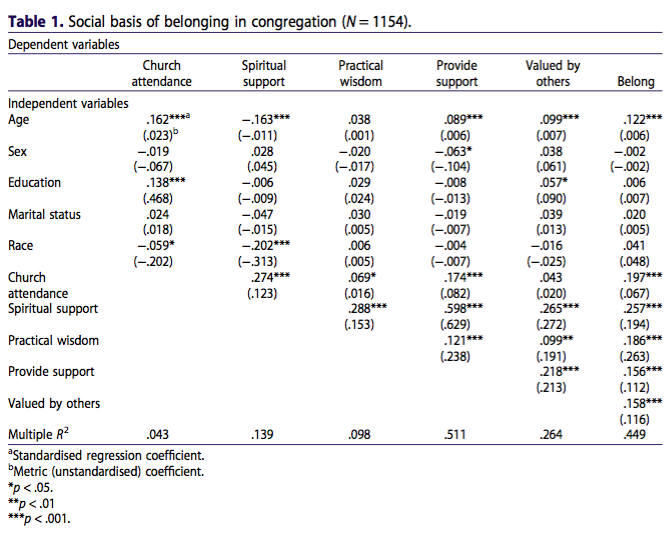 Therefore the spiritual, social, and political effects of congregational prayer and attendance of religious programs is undeniable. The benefits can be felt both in this world through a sense of belonging and being valued by one’s community and in the hereafter as a result of the magnitude of rewards given to those performing congregational prayer.