According to Ijtihad Network, Fuqaha and Revolution of Iran is one of new books, published by Kavir publication, that illustrates the confronting the great Fuqaha with Islamic revolution of Iran.

The history of Shia Maraji[1] (Shia religious authorities) is worthy for repetitive studying and reviewing. The book, Fuqaha[2] and Revolution of Iran narrates the little of this history.

According to Ijtihad Network, Fuqaha and Revolution of Iran is one of new books, published by Kavir publication, that illustrates the confronting the great Fuqaha with Islamic revolution of Iran. Sayyid Hadi Tabatabaei, the author of the book is introducing his book during this note.

Fuqaha and Revolution of Iran looks into manners and political and social activities of eleven people of eminent Fuqaha who were Marji after the demise of Ayatollah Boroujerdi until outset of Islamic Revolution, i.e. the years between 1961 and 1987. The book consists of eleven chapters and each chapter talks about one of those eminent Maraji.

This chapter talks about Ayatollah Hakim was dealing with the Pahlavi regime peacefully. Ayatollah has criticized Pahlavi regime, but he said,” We do not want to praise the Shah, but we say that his existence is better for the safeguarding in front of communism and the Shah should not be weaken.”

Ayatollah Khansari was among those Fuqaha who deal with the problems very cautiously. He had the same approach in politics. The Pahlavi regime respected his status and put in consideration his commands. Ayatollah has also benefited this opportunity many times and asked for the freedom of political prisoners. The Late Khansari, however, signed some of declarations up to 1961 against the dominant government, after the events of June 1963 (using the Iranian calendar the 15 Khordad uprising), he fell into silence and supported the revolutionaries less than before. Revolutionary clerics begun to protest and released a statement against him. Although Imam Khomeini respected his jurisprudential status, he did not tolerate the Late Khansari’s political approach and opposed him frequently.

This is the title of the third chapter. The Late Shirazi was among those Maraji who were in Najaf and apposed Pahlavi regime from there. His main oppositions were about government’s inattention to the religious laws. In 1975, the Late Shirazi returned to Iran and resided in Mashhad. With his presence in Iran, some of revolutionary clerics believed that his presence is harmful for revolutionary activities, so they attempted to release a statement against him. Ayatollah Shirazi was one of the Pahlavi regime opponents. Although he did notaccept some of radical movements of revolutionaries,he did many activities for supporting the revolution.

There are deferent analyses on the political manner of the Late Milani. Some people reckon him as a supporter of revolutionaries and some others know him as someone who has withdrawn from the Revolution and call him an opponent of it. The Late Milani had expressed his opposition to Pahlavi regime and had stated that he would do any attempt for saving the nation. He also had meetings with the heads of state and preventing them from radical activities towards people. But, after the years 1962 and 1963,the Late Milani avoided serious struggle and announcing clear state against Pahlavi regime and did not have any serious attempt. This approach brought about much opposition of his followers and revolutionaries clerics against him so far they had behaved offensively towards him in his presence.

The Late Golpayegani had a restricted accompany with revolutionaries at the first. After the events of June 1963, he involved less in the politics. It has been indicated that the Late Golpayegani basically was a cautious cleric and he became involved less in the political activities and people did not know him as a political cleric, therefore his entrance into the political arguments and opposition to Pahlavi regime was in contrast to his true manner. This matter caused that revolutionary clerics oppose to Ayatollah Golpayegani over and over. Even it resulted in forming a group called “Zarbat” among the clerics to have activities against this marjaʻ.

The story of Ayatollah Golpayegani’s refusal to move to Tehran for supporting Imam Khomeini was opposed by revolutionary clerics. Also his rejection to confirm Imam Khomeini as a marjaʻ provoked clerics against him. The Late Golpayegani’s priority was preserving Shi’a Seminary and not to interfere in politics.

The Late Amoli often signed the statements which were against Pahlavi regime.He was attached to Imam Khomeini; though he himself was a marjaʻ, he had uttered that all of his children follow Imam Khomeini in their practical ruling of religion. He was trying to accompany with Imam Khomeini in political movements. Ayatollah Amoli disapproved the movements which took the peace from the state and for this reason the revolutionary clerics were opposing him. He cut the financial aids of some revolutionaries for the same reason.Despite all of these, he kept on his association with the revolution up to the victory.

This chapter of book focuses on the controversial approach of the late Khoei.As it is obvious from the title, Ayatollah Khoei disapproved of Pahlavi regime and made serious complaints, but gradually he gave up his activities and despaired. There was a close relationship between Ayatollah Khoei and Imam Khomeini, but Imam Khomeini had opposed Ayatollah Khoei in some cases. Some of these disagreements resulted in tension among their followers. SAVAK[3] also used this situation and highlighted the issues.

The story of meeting Ayatollah Khoei with Farah Pahlavi is one of the issues which is illustrated in this book and indicated how the revolutionaries opposed him. At the end of this chapter, it is discussed about Ayatollah’s reasons for withdrawal from politics.

This chapter talks about the Late Shariatmadari’s position. Ayatollah Shariatmadari was one of challenging Marajiʻ of this period. He accompanied with revolutionaries and opposed Pahlavi regime initially, but after the year 1963, he gave up fighting. Two days after the events of June 1963, the Late Shariatmadari advised his adherent clerics to invite people to peace and not to taking part in demonstration because there would not be obtained any result. This attitude of Ayatollah Shariatmadari was enough the revolutionary clerics react against him. Many reports received that the revolutionary clerics put the blame on him in his presence.

Ayatollah Tabatabayi  Qumi resided in Mashhad and he was one of serious opponents of Pahlavi regimes. He was exiled many times, but during his exile, he declared his opposition to the regime through his letters. He advised people to strike in protest at Pahlavi regime and he believed this strategy weaken the regime effectively. Pahlavi regime had also spread rumors about him. However, the relationship between Imam Khomeini and him was good; it showed a sign of disagreement between these two marajiʻ.

The Late Ruhani disagreed with the revolutionary movements from the beginning. Although he had a slight reaction to Pahlavi regime, he was among the serious opponent of Imam Khomeini in Najaf. The reports received from Najaf indicated that Ayatollah Khomeini felt resentment toward other marajiʻ, yet he was striving not to provoke it in public. By contrast, Sayyid Mohammad Ruhani revealed his disagreement with Imam Khomeini and did not avoid expressing it. It was enough Imam Khomeini’s supporters undertook against him severely.In order to defame him, they began to spread rumors. One of Imam Khomeini’s fellow who was irritated by such manners against him, sent a mediator to the presence of the Late Ruhani to apologize him from unfair defamation. Ayatollah Ruhani is very upset and cries and says that this issue cannot be dealt with except in the Divine court. 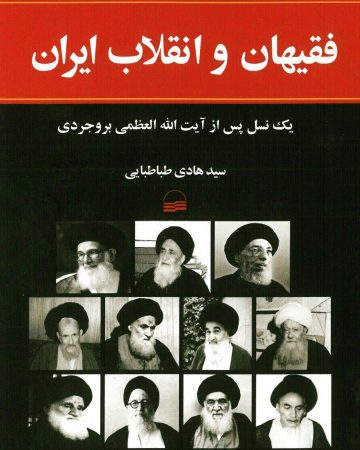 Ijtihad Network reminds that Fuqaha and the revolution of Iran, a generation after the great Ayatollah Boroujerdi by Sayyid Hadi Tabatabayi was published in 392 pages by Kavir Publishing House in January2017.

[1] Plural form of Marjaʿ (Arabic: المرجع; literally: authority to which one refers) is a Jurist and religious scholar whose edicts (fatwas) about Jurisprudential issues are followed and acted upon by a group of Shi’a  and to whom his followers give their religious taxes and fines.

[2]Pural form of faqīh (Arabic: فَقیه; translated as “jurist”) is a person who has the ability to deduce the jurisprudential (fiqhi) rulings from reliable sources

Previous Martyr Sadr Prostrated by the News of Islamic Revolution of Iran’s Victory
Next Divorce Reform in Egypt and Morocco: Men and Women Navigating Rights and Duties