Ayatollah Muhammad Mo’men Passes Away at 81

Ayatollah Mohammad Mo’men a member of Assembly of Experts of the Leadership and The Guardian Council of the Constitution of the Islamic Republic of Iran passed away at age 81 in Tehran, Iran.

Ayatollah Mo’min was born at the holy city of Qom in Islamic Republic of Iran on Thursday, Dhul-Qaidah 10, 1356/January 13, 1938. He was born of a religious family that was adherent of the Household of Prophet Muhammad, divine peace upon him. His father, Abbas Mo’min, was a trustworthy man making a decent living as a farmer. He lived about one hundred years and passed away in 1419. His mother was a chaste and pious woman who died four years before the death of his husband in 1415. Ayatollah Mo’min`s parents were born at Qom too and as far as he knew, his ancestors had been living at Qom for200 years. His family’s hard times during his childhood prepared him for a future brimful of endeavor and challenges.

He started school at the age seven and became engaged in learning the Glorious Qur’an in one of the neighborhoods of Qom called Bagh-e Panbeh. Then he went to another school and studied a book entitled Nisāb aṣ-Ṣibyānin addition to others. After that, on a friends’ advice, his father agreed to send him to an Islamic-National primary school. The primary school course was supposed to be completed in five years, but he finished it in two years to pursue his studies at high school, but since he had not reached the legal age, he could not take the final test.

In 1373/1953, he began to undertake religious studies, and during two years, he could study Arabic literature, part of a book entitled “Muṭawwal” and the whole book entitled Ma‘ālimal-Usl. This time, because of the family`s hard times, he tried to earn a living as a teacher. After that, throughout a fervent plea to Imam Ridha and Imam Mahdi, divine peace upon them, Ayatollah Mo’min could obtain his father`s consent for himself to begin religious studies. He studied Sharh-I Lum‘ah and Qawānin al-Usῡl within one year. Then he studied Sheikh Ansari`s Makasib and Rasaʼil within two years and in the sixth seminarian year, he finished first volume of Kifayah. Meanwhile, he participated in completed advanced course in seminary (darse kharij). Along with jurisprudential lessons, he was engaged in philosophical studies and theology and he learned the books entitled Sharh-e-Manzoume, Elahiyat-e-Shafa and Asfar too. 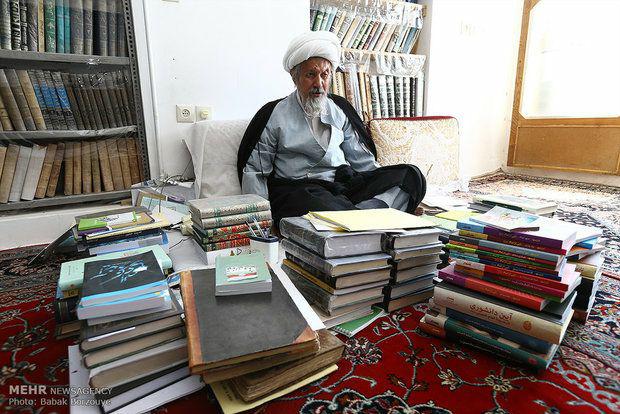 At the end of 1383/1963, he left for Najaf to continue his education and gained the substantial benefit from teachers of Najaf seminary. He returned to Iran after six months and pursued his education until 1394/1974.

The Students, Classmates and Teachers of Ayatollah Mo’min:

Agha Mostafa Khomeini was his teacher who taught him the philosophy and the book entitled Sharh-e-Manzoume written by Ayatollah Sabzevari. Then, he attended Alameh Sayyid Mohammad Husain Tabatabaei to study Elahiyat-e-Shafa and Asfar. Also, he had the privilege to go to Alameh Tabatabaei`s course in exegesis on Quran. Ayatollah Mo’min counted late Imam Khmeini, late Ayatollah Mohaqiq Damad and late Shaikh Morteza Haeri among his main teachers in seminary. He said about them, “These three honorable teachers were not merely iterating the facts and lessons but they were discussing comprehensively. Specially, when Imam Khomeini would raise an issue he would propound it precisely. He would quote from other religious scholars and would endeavor to educate the seminarians carefully.”

Scholarly and cultural activities
Ayatollah Mohammad Mo’min’s life is brimful of many scientific and cultural efforts. Over a long period, he has striven to educate young seminarians and has trained outstanding students to the benefit of academic and political community in the country. After passing a complete course of Principles [of religion], he attempted to teach several courses of Sheikh Ansari`s Rasàeil, some parts of Makasib, Sharh-e-Tajrid-ul-Eteghadat,Bidayat Al-hikmahand some parts of Asfar wa Arshiya. By the victory of the Islamic Revolution of Iran and decreasing the burden of responsibilities, in 1403/1983 he became engaged in teaching the completed advanced course on the principles (Usul) and he is still teaching its third level. Teaching the issue of trading according to a book entitled Tahrir Al-wasilah written by Imam Khomayni and also teaching the books such as Ghaza wa Shahadat as well as the other main issues of the day in the form of completed advanced training of  jurisprudence (Darse Kharij), are of his efforts and programs for training young seminarians. He is now teaching the course of Islamic Government too.
Ayatollah Mo’min has written several books that are published. Moreover, he is the author of several remarkable books on Islamic sciences, which are beneficial for academic community. The following is the list of some of his book:
1. The review (taqrir) of Imam Khomeini’s lessons on the principles (Usul), sale and prohibited businesses with his marginal annotations
2.The review (taqrir) of Ayatollah Mohaqiq Damad’s lessons on Fasting and Prayer,
3. A complete course on the principles of Islamic jurisprudence based on reasoning entitled Tasdid Al-Usul
4. Ten jurisprudential theses on the issues of the day, entitled Kalamt-e-Sadideh,
5. The dominion of Imam and Prophet Mohammad [peace be upon them] over general legislation
6. The dominion of Imam and Prophet Mohammad [pbut] over Islamic society

7.A marginal an notation on Asfar wa Shawahid Al-Rububiyah. 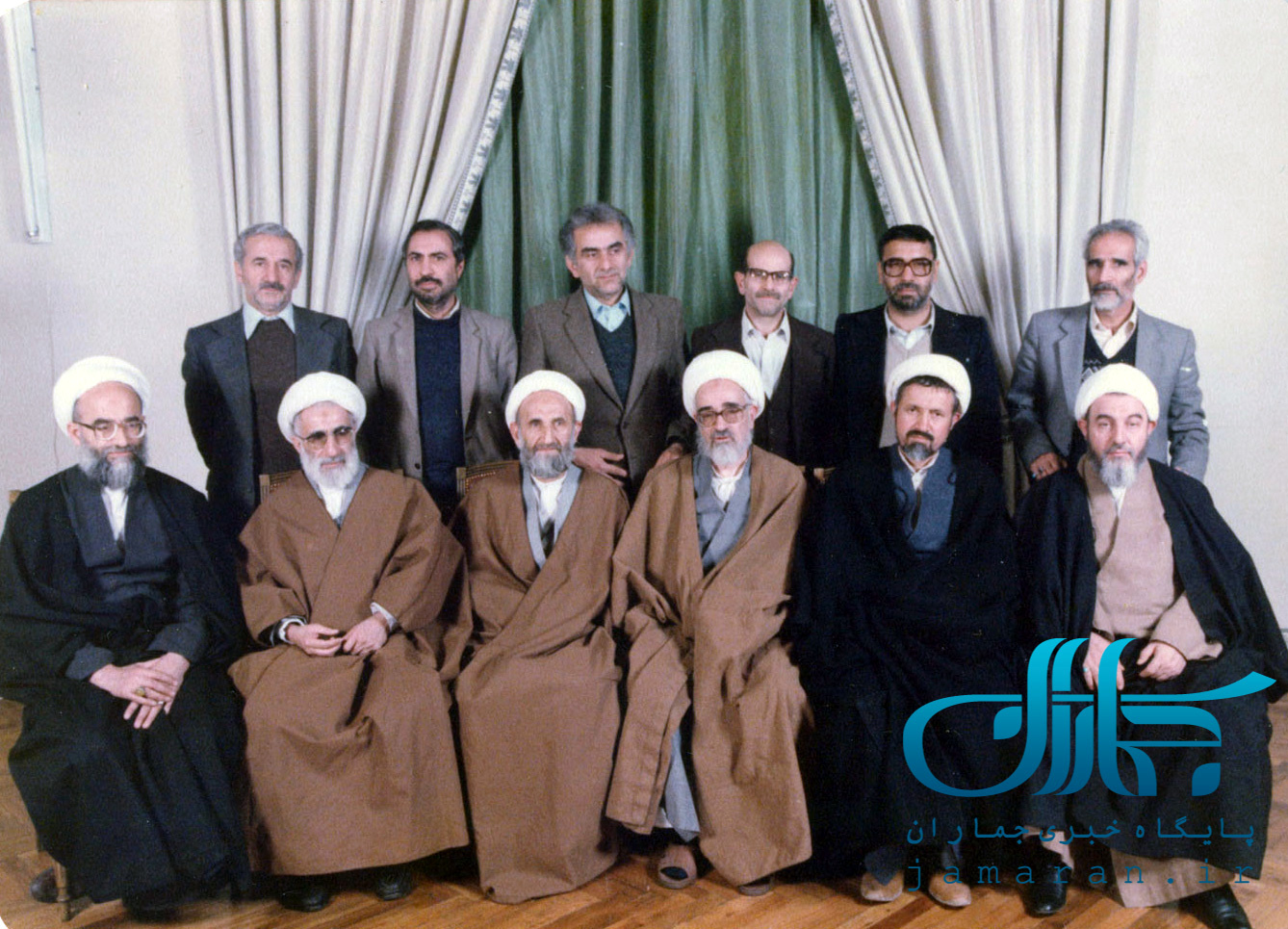 Amongst his other academic and cultural activities, we can refer to formulating and regulating the internal regulations of the Management Council of Qom Seminary, which was carried out during his tenure as the manager. The aforementioned regulation is now proceeding to its evolutionary way by the aid of other authorities of the council.

The life of Ayatollah Mohammad Mo’min, both before and after the revolution, contains political challenges and the burden of leadership. In1384/1964, Capitulations bill was proposed in the parliament at that time. 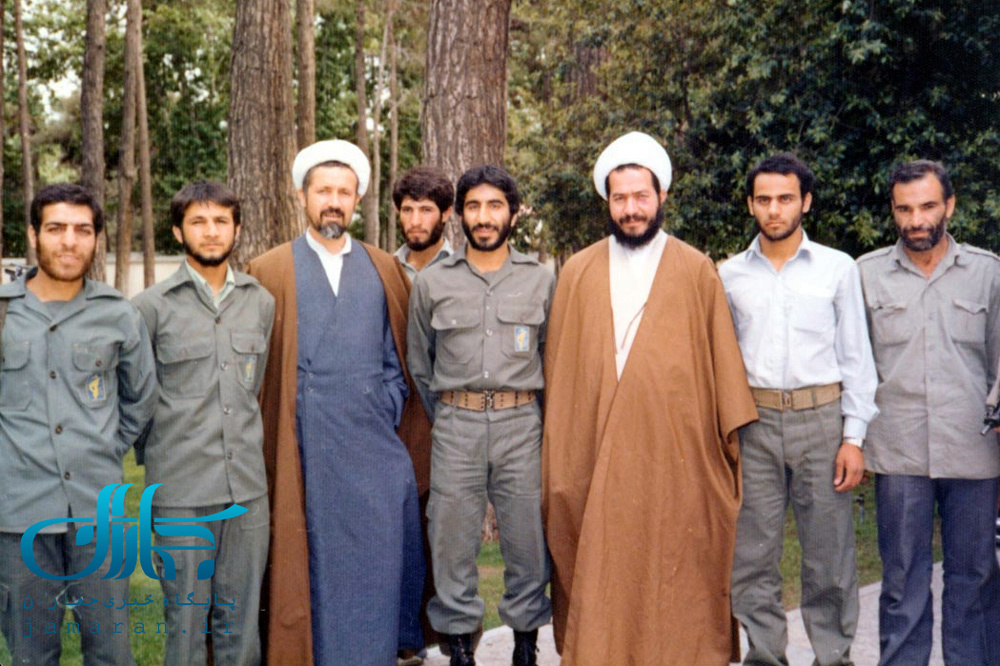 Following this incident, Imam Khomeini (may God bless his soul), delivered a rousing speech, condemning this issue and called all Muslims and Islamic scholars to stand against this bill. The dictatorial regime, which was scared of Imam Khomeini’s revelation, arrested him. Two months later, this nobleman was confined to a house in Tehran, Qeytaryah neighborhood and the regime detained him incommunicado. In the late 1383/1963, in order to pay a visit to Holy Shines of Iraq and to attend to the completed advanced training (darse kharij) of the scholars of Najaf seminary, he traveled to Iraq and this travel lasted for about six months. Then he returned to Iran in 1384/1964.
Then, Imam Khomeini was detained and sent to exile to Turkey. Coincident with this event, Ayatullah Mo’min who aimed at traveling to Najaf for Ziyarah, was asked by Hajj Sheikh Morteza Hayeri to deliver a message to Ayatollah Sayyid Mohsen Hakim. Ayatollah Mo’min was supposed to deliver this message to Ayatollah Hakim through the help of Imam Musa Sadr or Hajj Sheikh Nasrullah Khalkhali. The message was this:

At this moment, Hajj Aqa Ruhollah (Imam Khomeini) is deemed as a high religious authority (Marja), and arresting and banishing him is, in fact, tantamount to insulting the Shiite authority. Therefore, it is necessary for Ayatollah Sayyid Mohsen Hakim to react to this matter and to ask for returning him from exile.

Amongst other activities that stand out in Ayatollah Mo’min’s dossier, we can mention to delivering a letter from some members of the teachers community in Qom Seminary to Imam Khomeini. Through this letter, they confirmed the status of high religious authority (Marjaeyah) of Imam Khomeini. Ayatollah Mo’min delivered this letter to Imam Khomeini, in Najaf. Imam Khomeini, who had always rejected such authorities and titles, initially opposed to accept it. Expressing the situation of that period of time, Ayatollah Mo’min described the political aspects of this decision for Imam Khomeini. He stated that the reason for which the teachers’ communities offer the high religious authority to Imam Khomeini is that they only recognized him as the best person for confronting against the corrupt regime of Shàh. In this regard, they considered it as their duty to introduce Him as the high religious authority (Marja). Thus, Imam Khomeini fell into silence in the face of this declaration of authority.
His attendance at the meetings of the teachers community before the revolution, and pursuing the decrees and statements of the revolution are amongst his brilliant activities. These activities lead him to be arrested and was sent to exile in 1394/1975. He was sentenced for three years of compulsory residence in Shahdad, Kerman, Iran. After spending seven or eight months in Shahdad, he spent the rest of his banishment in Toysarkan.
Although he was sent to exile, he did not abandon his political attempts, but he revealed the entity of the regime to people through expressing the Islamic laws and the important issues of the revolution. He invited people to follow and imitate the way of high religious authorities (Marja) of Shia, in particular that of Imam Khomeini who was the leader of the revolution at that time. 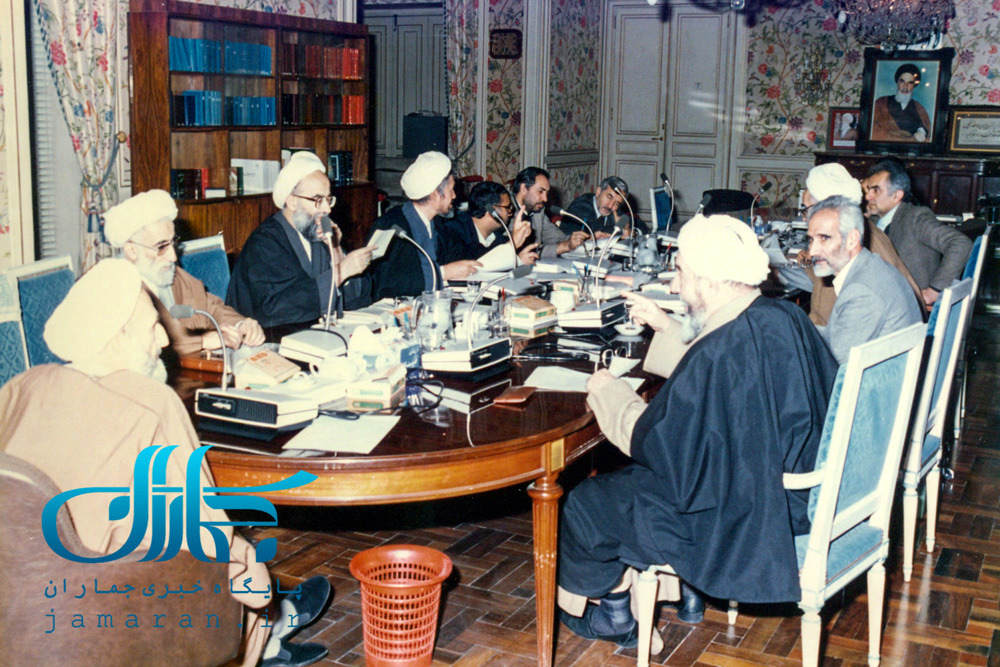 Following the glorious victory of the Islamic Revolution of Iran, the activities of Ayatollah Mo’min continued in the form of executive responsibilities as well as moral and explanatory teachings. His most important responsibilities after the victory of Islamic Revolution are as follows:
1. the responsibility of selecting and dispatching the religious judges to Inqilab courts throughout the country on the orders of Imam Khomeini;
2.The Head of the Supreme court of the Islamic Revolutionary;
3. The members of the Supreme Judicial Council;
4. The member of the Guardian Council of Constitution with the decree of Imam Khomeini in 1983 and the retention in that responsibility by the decree of the Supreme Leader, Imam Khaminei;
5. Manager of the Qom Seminary and a member of the Supreme Council of Policymaking in Qom Seminary from 1992 to 1995; and member of the fourth term of the Supreme Council of Qom Seminary;
6. The elected representative of the people of Semnan in the first and second period of the Assembly of Experts of Leadership and in the third period the elected representative of the people of Qom;
7. Being the Head of Ahlul-Bayt Jurisprudence Assembly.