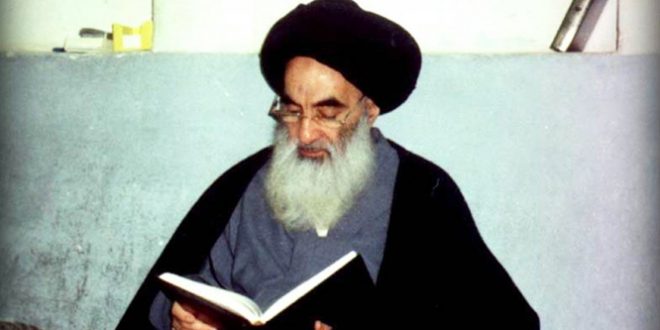 What follows is a translation of the first, and part of the second, introductory discussions in the transcribed notes of al-Sayyid ʿAlī al-Ḥusaynī al-Sīstānī’s (b. 1930) advanced lectures on uṣūl al-fiqh published as al-Rāfid fiʿilm al-uṣūl.

Al-Sīstānī is one of the most authoritative and influential Twelver Shīʿī jurists of the day. Although born and raised in Iran, he currently resides in Najaf, Iraq holding a seat of supreme religious authority with a global following.

The first section discusses the importance of uṣūl al-fiqh (referred to throughout as ʿilm al-uṣūl) in the Twelver Imāmī Shīʿī school by responding to an internal Imāmī critique that claimed the discipline of uṣūl al-fiqh is little more than a needless concoction of issues brought together as a result of Sunnī influence on Shīʿī scholars. al-Sīstānī’s unequivocal rejection of this position aims to set out the independence of uṣūl al-fiqh, its originality, early development and importance within Shīʿī thought. The second section classifies the history of uṣūl al-fiqh in Imāmī thought into three phases. Each phase is characterized by distinct intellectual struggles impacting the progression of ideas within the discipline. For al-Sīstānī, the first phase was shaped by intra-Muslim debates whilst the second was shaped by intra-Shīʿī ones. The third phase, mentioned only briefly here, is the current period in which we now live. According to al-Sīstānī, the mark of this contemporary phase in Shīʿī jurisprudential thought is the need for it to develop, engage and respond to the broader economic, political and cultural challenges of the contemporary era.

The footnotes to the translation are limited to those found in the published Arabic version of the text, although they have been modified in form to fit the style of this publication and enable independent access to the sources mentioned. Dates of death for scholars have again only been included where they are present in the published Arabic text, although I have added the common era dates alongside the original Hijri ones.

The Discipline of Legal Theory in the Imāmī School

We begin by citing some words from al-Karakī’s book, Hidāyat al-abrār, as transmitted by al-Qaṭīfī (one of the teachers of the author of al-Wasā⁠ʾil). He said,

Know that the discipline of legal theory has been concocted from various sciences and diverse issues, some of which are true and some of which are false. The Sunnī’s produced it due to the paucity of prophetic reports (sunan) in their possession that indicate to [Sharīʿa] precepts (aḥkām).[1]

The Shīʿa had no authored works in legal theory for they had no need for it, due to the availability of all that they required of it being within the necessarily accepted axioms of religion (al-ḍarūriyyāt al-dīn) and its theories being in the principles relayed from the Imams of guidance. This was until Ibn Junayd came and examined the legal theory of the [Sunnī] Muslims, and took from them, composing books in accordance with that model – to the extent that he even acted upon analogical reasoning (qiyās).[2]

This statement can be broken down into three claims;

The First Claim and Its Refutation

It is clear that there are many issues outlined in the discipline of legal theory that are not relevant to any other discipline, for example:

All these discussions bear no relation to the discipline of linguistics, nor to juristic inference (fiqh), nor the biographical sciences (rijāl) nor any other subject, for they are all related to ‘the authoritativeness of juristic evidence’ (ḥujjiyyat al-dalīl al-fiqhi) which is the very criteria for a jurisprudential (uṣūlī) discussion, accordingly the appropriate [discipline] for them is the discipline of legal theory. The mere occurrence of some linguistic issues; such as postulation, usage, the real and the metaphorical – which are mentioned as preludes to certain jurisprudential discussions, and the mere occurrence of some theological and philosophical issues; such as the conformity between what is sought [by God] and [His] intention, and the discussion on the mental consideration of quiddity in unqualified and qualified notions – which are again mentioned as preludes or links to some jurisprudential issues, does nothing to remove the aforementioned issues from being jurisprudential, nor prevent the discipline in which they are found to be deemed an independent discipline in its own right – so long as the criterion for a jurisprudential issue is present therein, as will be demonstrated in what follows.

The Second Claim and Its Refutation

The Third Claim and Its Refutation

The Phases of Jurisprudential (uṣūlī) Thought

The criterion for a phase, according to our conception of it, is not related to the time span of the discipline, as sometimes a period of time may pass without the attainment of any progress and renewal in the journey and development of that discipline. The only criterion for distinguishing one phase from another is the emergence of progressive theories that serve to propel the development of the journey of those ideas, and this usually only occurs as a result of intellectual competition and cultural development. Just as societies develop within the preserve of civilization, through economic and cultural competition amongst and between those societies, the development of any ideas requires a form of deep struggle between the founders of those ideas, that they may benefit from such struggle in the process of crystalising their theories and renewing their ideas. Accordingly it is upon this basis – that is the basis of intellectual struggles (al-ṣirāʿ al-fikrī) – that we shall delimit the phases of jurisprudential thought amongst the Imāmī Shīʿa.

Within the context of identifying Sharīʿa precepts, there were two mutually competing schools, the school of opinion (madrasat al-ra⁠ʾī) and the school of hadith (madrasat al-ḥadith). As for the school of opinion, its mischief originated from some of the companions and caliphs who prevented the recording of the Sunna for specific political goals, whilst relying on their own personal opinions and ideas when it came to things related to public interest. This school continued into the second century whereby it became the general inclination of the Iraqis’ following Abū Ḥanīfa who upheld the authoritativeness of analogical reasoning (qiyās) and juristic preference (istiḥsān), as well as requiring ‘holistic criticism’ (naqd dākhilī) of hadith by comparing them against the general principles of Islam. As for the school of hadith, which emerged as a response to the continuity of the school of opinion and took form in the Hanbali and Maliki doctrinal schools (madhāhib) more so than any other, it was extreme in its reliance upon hadith simply as instances of a trustworthy report (khabar thiqa) without consideration of general principles.

Each one of these two schools influenced some Shīʿī scholars, as is attributed to Ibn Junayd with regard to his views on employing qiyās – if the attribution is correct – whilst that which resembles the opinions of the Ḥashawiyya[11] are attributed to some others. Accordingly, and from this starting point, Shīʿī scholars embarked upon a serious engagement into jurisprudential thought, with the first phase of the journey opposing the school of opinion, the school of hadith, and whoever from amongst the Imāmī scholars had been influenced by either of them. The biographical dictionaries record that some of the Banū Nawbakht, and others, wrote treatises on the in-authoritativeness of analogical reasoning and on [the issue of] conflicting hadith. al-Shaykh al-Ṭūsī in al-Fihrist and al-Sayyid al-Murtaḍā in al-Intisār mentioned the intense opposition to the method of Ibn Junayd,[12] whilst al-Shaykh al-Mufīd wrote a treatise on the invalidity of analogical reasoning, as well as a book titled ‘The Knowledge Trove of Light for Refuting the Traditionists (Maqābis al-anwār fī al-radd ʿalā ahl al-akhbār)’.[13] Such treatises gave jurisprudential thought a breakthrough and perceivable progress, as can be seen in the ʿUdda of al-Shaykh al-Ṭūsī. After the passing of al-Ṭūsī, jurisprudential thought fluctuated between progress and stagnation. During the time of the Daylamites, further progress was made due to the presence of intellectual competition, however this progress stopped by the time of the Seljuks due to the existence of pressure and restrictions.

It [jurisprudential thought] was revived again after the battle of al-Tutār due to the greater scope for intellectual freedom. al-Muḥaqqiq, in al-Tadhkira and al-ʿAllāma, in al-Muʿtabar, displayed the extent of the depth of jurisprudential thought in comparative juristic inference (al-fiqh al-muqāran). This period, although short, left its mark even upon the thought of scholars of other doctrinal schools. Abu Zahra, in his book Ibn Taymiyya, mentions that Ibn Taymiyya was influenced by the juristic thought of the Shīʿa contemporary to him, as demonstrated in his juristic inference on some of the issues relating to divorce. After this period, jurisprudential and intra-school juristic thought returned to stagnation, and no sign of comparative juristic thought, nor points of Imāmi innovation in jurisprudential thought can be seen in the works of al-Shahīd al-Awwal. In fact, al-Shahīd al-Thānī stated in his Kitāb al-Qaḍāʾ that it would suffice a student in logic and legal theory to study the Mukhtasar of Ibn Ḥājib[14] – even though this book demonstrates no Imāmī creativity.

The Second Phase, Which Marks the Intellectual Struggle between the Uṣūlī and Akhbārī Schools

After the Shīʿa became politically established in the Safawid era at the beginning of the 10th century, there emerged from within them the Akhbārī school, epitomized by Mulla Aḥmad Amīn al-Astarabādī and those influenced by him; such as the two Majlisī’s, Fayḍ al-Kāshānī, Ḥurr al-ʿAmilī and Shaykh Yūsuf al-Baḥrānī. Among the factors that gave rise to the emergence of this school, per some Shīʿī scholars, was that the jurisprudential principles employed in inferring Sharīʿa precepts relied upon theological and philosophical ideas, which resulted in distancing the Sharīʿa precepts from their pure sources – the traditions of the Ahl al-Bayt (peace be upon them). From here began a deep intellectual struggle between the two schools, and jurisprudential thought made great progress through this struggle, taking remarkable steps forward at the hands of al-Wahīd al-Biḥbaḥānī, al-Muḥaqqiq al-Qummī, Ṣāḥib al-Fuṣūl and al-ʿAllāma al-Anṣārī.

The Third Phase, Which Marks the Contemporary Era

The period in which we currently live, due to economic and political factors, has led to a deep struggle between Islamic culture and other cultures at various levels. Accordingly, it is necessary for the discipline of legal theory and its form to progress to a level appropriate to the conditions of contemporary life.

[4] ʿĀmilī, Wasā⁠ʾil, 27:123; Majlisī, Biḥār, 2:244. [Translators note: The citations of the hadith are either from variant editions or not exact quotations. The relevant part of the cited hadith in the editions consulted reads; “If two conflicting traditions come to you, then compare them (fa qiṣhumā) to the Book of God and to our traditions …” See ʿĀmilī, Wasā⁠ʾil, 27:125–6 and Majlisī, Biḥār, 2:244–5.

Published in: Visions of Sharīʿa

The office of the Grand Ayatollah Sistani issued a statement today, Saturday, about the families affected by the current situation due to the spread of the...