Home / All / Fiqh & Socitey / Akhund Khorasāni and His Former Student

Akhund Khorasāni and His Former Student

It is narrated that when Khorasāni declared supporting the Consitutional Revolution a religious obligation one of his best students left him and joined the [opposing] camp of Sayyid Mohammad Kādhim Yazdī.

It is narrated[1] that when Akhund Khorasāni declared supporting the Consitutional Revolution a religious obligation one of his best students left him and joined the [opposing] camp of Sayyid Mohammad Kādhim Yazdī. If this wasn’t bad enough, he had also started cursing and insulting Khorasāni. One day a number of people from his area entered his home who happened to be muqallidīn of Khorasāni. They brought with themselves 70 gold coins which they wanted to give to the former student but they wouldn’t do it without the permission of [their marja’] Khorasāni, and for that they mentioned how they wanted to go to Khorasāni with the student and make this request. Given his history with Khorasāni the student didn’t know whether to agree to their request and go or not. In the end after a bit of pressure he decided to go along with the group to the home of Khorasāni.

They entered the home of Khorasāni and as they did so, Khorasāni realised they had not come merely to show their respect but they had a need (to request from him). As they entered, Khorasāni displayed extraordinary etiquette to the former student and sat him down next to himself after which Khorasāni asked him what could he do for him. The former student then told Khorasāni: “The group have 70 gold coins which they want to give to me but only with your permission”. The student then signalled someone from the group to bring the bag of gold coins and to place it next to Khorasāni. Khorasāni didn’t touch the bag and said to the group: “With such a pious and outstanding person (amongst you) why have you come to me? Do you not know that his hand is like mine, and whatever he narrates is what I narrate”. After this Khorasāni ordered them to take the coins back and give it to the former student.

The companions of Khorasāni who saw him behaving extremely respectfully with his former student thought to themselves that perhaps Khorasāni hadn’t recognised him. So they (patronisingly) asked the former student about the condition of Sayyid Kādhim Yazdi. Khorasāni who was at that time busy writing up his notes on Usῡl put his pen down and immediately interjected: “In fact, on my way to class I had just met him, and he is doing well”. When it was time for them to go, contrary to what he would normally do, Khorasāni accompanied them all the way to the door. After they left he turned to his companions and said: “If we consider supporting the Constitutional Revolution obligatory, and Syed Yazdī considers it forbidden, (then know that) these are two differences of opinions just like all the other differences of opinions there are. There’s no need for you to interfere in this matter of our different opinions. This is merely a difference of opinion. On what basis do you want to interfere?” The companions replied: “The person who just left curses you!”. Khorasāni responded: “I extensively looked in all the books of the fuqahā and nowhere did it say that respect for Khorasāni is amongst the conditions for being able to receive sahm imam”.

The following day a number of the companions of Khorasāni and the three who have narrated this story were with Khorasāni when his former student turned up and respectfully thanked Khorasāni. ََKhorasāni got upset and said to him: “Dear! Your understanding is that our path is not correct, and as long as you have this understanding, it is your religious obligation to continue what you are doing. You should not change your mind simply out of what I did for you. I consider you a pious and virtuous person, and while I hold this opinion I should love you, and you should keep acting according to what you know to be true. You have one religious obligation, and so do I, we should not let these things impact our obligations.”.

The article is translation of  Jur’eh’ī az Daryā by Sayyid Shubayr Zanjāni, v. 1, p. 526, by Sadiq Meghjee a financial accountant by profession, currently pursuing further Islamic studies in the seminary of Qom, Iran. 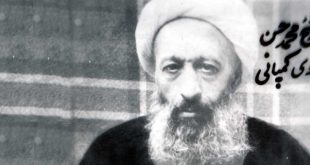 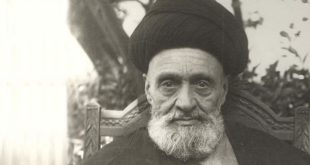