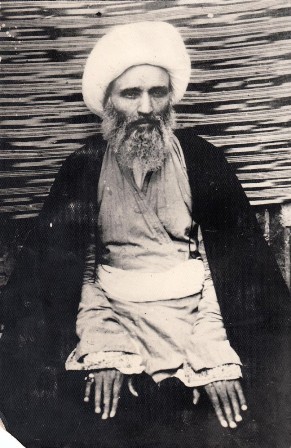 Akhund Mulla Muhammad Kazem Khorasani was born in 1329 in Mashhad. He was the fourth and youngest son of Mullā Ḥussain Waez Harati, an itinerant preacher from Herat who finally settled in Mashhad; there Akhund was born, received his early education, and married.

Demonstrates His Mastery of Fiqh and Osul in Najaf

After Ayatollah Shirazi’s death, Samarraʾ lost its importance, and Akhund was recognized as a great religious leader. This is perhaps the reason a number of authors such as Ayatollah Davvānī and Shahrestānī  have ranked Akhund as sole marǰaʿ-e taqlīd immediately after Ayatollah Shirazi. The presently available sources, however, question this line of succession. Akhund attracted an unparalleled number of students from different regions of the Muslim world to his daily lecture on oṣūl. It appears that he was recognized as an unquestionable master of oṣūlal-feqh before Moḥammad Fāżel Sharabīānī’s death in 1322/1904, and from then on as the sole marǰaʿ-e taqlīd in the Shiʿite world.

In Iraq Akhund established three religious schools and a number of modern schools; he also helped found a number of periodicals in Najaf, such as al-Ḡorā and Najaf-e ashraf. He believed in the development of domestic trades and industries; on more than one occasion, he seriously discouraged the consumption of foreign goods. In 1898, when a “Sherkat-e eslāmīya” was established to undertake the production of textiles and to promote their trade in Iran, Akhund declared it the duty of all Muslims to boycott clothes made in foreign factories and to wear clothes produced domestically.

In the field of oṣūlal-feqh, Akhund has been referred to as a renovator (moǰadded). His most important contribution is Kefāyat al-oṣūl in two volumes, dealing respectively with verbal proofs (al-adella al-lafẓīya) and rational proofs (al-adella al-ʿaqlīya); it has been used as a textbook in Shiʿite circles since its first appearance in 1885 and numerous commentaries have been written upon it; a list of 104 of them is given by Moḥammad-ʿAlī.

The earliest known documents relevant to Akhund’s anti-government activities concern the 1321/1903 unrest following the two Russian loans to Moẓaffar-al-dīn Shah. During the constitutional revolution he appeared as a powerful supporter of the establishment of a parliamentary form of government. Together with two other high ranking moǰtaheds, Mirza Hussain Tehrani and Sheikh Adullah Mazandarani he issued many manifestos and fatwās and sent telegrams to tribal chiefs, prominent national and political leaders, and heads of state in England, France, Germany, and Turkey. When Muḥammad-ʿAlī Shah ascended the throne in 1325/1907, Akhund sent him a ten-point directive, which included instructions to protect Islam, to promote both domestic industries and modern science, to put an end to intervention by foreign powers while retaining diplomatic relations, and to establish justice and equality (al-ʿErfān 2, 1910, pp. 119ff.). When the shah shelled the parliament building (Jomādā I, 1326/June, 1908) and executed many constitutionalists, Akhund intensified his campaign against his rule.

Akhund believed that in the absence of the Imam the best possible political institution would be a constitutional form of government, which might not be at variance with Islam. On more than one occasion he and his supporting colleagues asserted that participation in the Persian revolution was a holy war incumbent upon all Muslims, and warned that opposing it was to wage war against Islam.

In order to depose the shah and to restore the constitution, Akhund launched his most enduring campaign: He asked Iranian revolutionaries residing in Istanbul to prepare an expedition of ʿolamāʾ to Iran. Misled by British statements in favor of democracy and constitutionalism, and perhaps unaware of the Anglo-Russian common cause in Iran especially after the 1907 convention, on 4 August 1908, Akhund made an attempt to attract British support for the constitutional revolution, but his request was turned down.  In Ramażān, 1326/October, 1908, Akhund and his two colleagues submitted a note to the official French representative at Baghdad complaining bitterly about Moḥammad-ʿAlī Shah’s actions, cited from the French Ministry of Foreign Affairs archives. Akhund decreed that Iranians should remove the shah and not pay taxes to his government.

During this period, the revolutionaries of Transcaucasia, many of them Persian emigrants mobilized by the Social Democratic Party, were actively fighting against Tsarist Russia. Being fully aware of the willingness of the Caucasians to extend their support to the Persian revolution, Akhund and Shaikh ʿAbdallāh Māzandarānī, in December, 1908, sent a joint letter to “all brothers in the faith in Caucasia, Tiflis, Batum, and other territories” and invited them to unite with the revolutionaries of Tabrīz and put an end to Qāǰār despotism. M. Maschkow, the Russian representative at Baghdad admitted that “Mullah Mohammad Kazem Khorasani had great influence in Baku which . . . [was] a centre for revolutionary propaganda.”

Akhund welcomed the Young Turks’ revolution of 1908 by sending Sultan ʿAbd-al-Ḥamīd II a telegram concerning the necessity of enforcing the Turkish constitution. He found it expedient to cooperate with the Young Turks’ pan-Islamic policy, and even threatened to declare ʿAbd-al-Ḥamīd II dethroned after his counter-revolution in 1909. However, Akhund sent a number of telegrams to the sultan urging him to help the Persians rid themselves of Moḥammad-ʿAlī Shah.

Both the British and the Russian ministers at Tehran now personally insisted that the shah declare a constitutional regime. The shah promised as much, and sent a telegram to the ʿolamāʾ of Najaf and Karbalā informing them of the reestablishment of a constitutional system. Akhund and his colleagues refused to believe him, declaring that firm commitments had to be made. Meanwhile, the two great powers jointly submitted a “Draft Anglo-Russian Identic Communication” to Akhund and other constitutionalist leaders in Iraq asking them to end their political activism and to advise the Persian parties to exercise moderation. By doing so the mojtaheds would be acting to their own benefit. It seems that the ʿolamāʾ paid no heed to this advice. The uncompromising position of Akhund towards the two powers seems to have been the reason for the negative remarks repeatedly made about him in the British official correspondence of this period.

While Akhund was fighting against British interests in Iran, he was also on the payroll of the Oudh Bequest, a charitable fund assigned by the king of Oudh in 1825 to be distributed to the poor by the Shiʿite ʿolamāʾ of Najaf and Karbalā. Arthur H. Hardinge, the British minister at Tehran, called the bequest a powerful lever helping to promote good relations between himself and the Persian ecclesiastics. No doubt some of the ʿolamāʾ were aware of the British intentions, since a number of them, including Sheikh Mortażā Anṣārī, refused to accept an allowance. Akhund’s response to a letter of 20 September 1909 from the British consul shows clearly that he believed he had the right to use the fund at his own discretion. He writes that the only responsibility of the British government is to take care in selecting recipients who are then free to spend the money as they see fit.

In order to offer more effective support to the Persian revolution, the ʿolamāʾ of Najaf, led by Akhund, set out for Karbalā, whence they planned to proceed to Iran. But the expedition was never completed, since soon afterwards, on 15 July 1909, the constitutionalist forces occupied Tehran. Certain secularist measures were adopted by the new government which were not to the liking of the ʿolamāʾ ; and because of the propaganda campaign launched by the anti-constitutionalist forces headed by Shaikh Fażlallāh’s followers in Iran and by Sayyed Kāẓem Yazdī in Najaf, Akhund and his constitutionalist colleagues suffered a loss in reputation and popularity. Consequently they complained bitterly against the functioning of the constitution.

Despite these setbacks, Akhund again raised his voice in favor of the Iranian constitutionalists who were resisting the 1911 Anglo-Russian invasion of Iran and the Russian ultimatum to the Persian government, and once again he sought the Ottoman sultan’s intervention. He decided to move to Iran to oppose the foreign invasion, but he died suddenly in his house on 13 December 1911. Anglo-Russian elements were suspected in his death, as well as Sayyed Kāẓem Yazdī and the governor of Najaf. On an earlier occasion, Māzandarānī had clearly indicated that both his life and that of Akhund had been threatened.

Akhund Mulla Muhammad Kazem Khorasani passed away on 12 December 1911in Najaf and Buried in holy shrine of Imam Ali (as).