Ayatollah Sayyed Muhammad Behbahani, a leading mojtahed of Tehran who played a role of some importance in the events of the first two postwar decades.

He was born to Sheikh Sayyed ʿAbd-Allāh Behbahānī, the celebrated ʿālem who was later to become a leader of the Constitutional move­ment, on 9 Jomādā II 1291/24 June 1874.

His formal religious education began at the age of twelve, when he embarked on the study of feqh and oṣūl with Mirza Hassan Ashtiyani. Somewhat later he joined the circle of Abu’l-Ḥasan Jelva, and studied logic and philosophy under his guidance for six years.

The bulk of his religious education thus took place in Tehran, but he conformed to the pattern of his day by traveling to the ʿatabāt in order to attend the lectures of religious authorities of the day, especially Āḵūnd Mollā Moḥammad-Kāẓem Ḵorāsānī (q.v.). 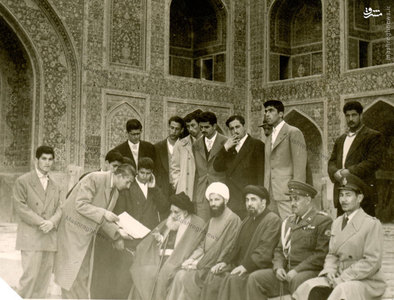 Ayatollah Behbahani in Holy Shrine of Imam Reza (as)

He then returned to Tehran, where he was to spend almost all the rest of his long life. He is said to have assisted his father in his political activities during the Constitutional Revolution, and to have participated vigorously in the debates surrounding the supplementary Constitutional law of 1907. The influence of the younger Behbahānī must have extended beyond the capital, because he is re­ported to have sent a telegram to the ʿolamāʾ of Yazd in 1907 urging them not to obstruct the execution of a Muslim who had been condemned to death for the murder of a Zoroastrian (Doroshenko, p. 86). When his father was assassinated in July 1910, ayatollah Moḥammad Behbahānī to some degree fell heir to his great influence in the capital. But despite the fact that he is asserted to have enjoyed the favor of Reżā Shah (Ḥerz-al-Dīn, p. 18), he appears not to have engaged in any significant public activity until the postwar period.

It was then that he emerged as one of the most influential politically involved ʿolamāʾ. It is fair to describe the attitudes he manifested, and the tactics he followed, as conservative.

Issuing a Fatwa against Appearing Women in Public without Islamic Dress

In 1948, Behbahānī put his signature—together with fourteen other mojtaheds—to a fatwā prohibiting women from appearing in public unless they observed Islamic criteria of dress. The prime minister of the day responded with an appeal to him to use his influence to prevent attacks on women who failed to heed the fatwā. Four years later, we find Behbahānī prominent among the religious leaders opposing the planned enfranchisement of women. His attitude to Dr. Moḥammad Mo­ṣaddeq has been described as moderate and balanced. For example, in an interview published in Eṭṭelāʿāt on 17 Ḵordād 1331 Š./7 June 1952, he expressed his support for the nationalization of the Iranian oil industry brought about by Moṣaddeq and at the same time thanked Moḥammad-Reżā Shah for professing fidelity to Islamic principles. But in 1953, he adopted an increasingly hostile stance toward Moṣaddeq, opposing his plans for calling a referendum which would vest emergency powers in his government and threatening to mobilize against him his followers in the bureaucracy.

When the coup of August 1953 displaced Moṣaddeq, Ayatollah Behbahānī allegedly played a role of some importance, distributing money on behalf of the plotters, money received from the United States and known popularly as “Behbahānī dollars” (Cottam, p. 155),

These allegations have never been proved in detail, but it is certain that Behbahānī facilitated the coup to some degree by ordering his followers in the Tehran bāzār to close their shops at the time of its occurrence. Faced with a choice between the continuation of Moṣaddeq’s premiership and the return of the shah from his exile, Behbahānī clearly preferred the latter alternative, doubtless from fear that Moṣaddeq’s administration would soon yield to rule by the Tudeh Party. In the period following the coup, Behbahānī attained the height of his prominence, not shrinking from open association with the court and the government. He met with Minister of the Court Ḥosayn ʿAlā on several occasions, and exchanged messages both with the shah and his first post-coup premier, Fażl-Allāh Zāhedī.

Shortly before leaving Tehran for a visit to Mašhad in October, 1953, he sent, for example, a letter to the shah, asking for a ban on the production and sale of liquor.

Ayatollah Behbahānī’s relations with the regime began to sour in 1959. The question of female enfranchisement was raised anew in the Senate, and ayatollah Behbahānī denounced its proponents—especially Senator Hedāyat-Allāh Matīn-Daftarī—in a letter that was published in Keyhān on 17 Day 1337 Š./7 January 1958. He evidently pursued the issue until 1962, for on November 5 of that year we find him receiving from Ayatollah Moḥsen-al-Ḥakīm, a marjaʿ resident in Iraq, a telegram in which he acknowl­edges Behbahānī’s letters on female enfranchisement and urges him to persist in his opposition to it (copy of the telegram in H. Algar’s collection). The other major issue that turned Behbahānī against the government was that of the planned redistribution of land. Knowing him to share his attitudes on the matter, Borūjerdī addressed to Behbahānī an open letter denouncing the limitation of landed holdings as contrary to Islamic law. The same day that he received the letter (23 February 1960), Behbahānī wrote to Sardār Fāḵer Ḥekmat, chairman of the Majles, demanding that no further discussion of land redistribution take place. Thereafter his relations with the government continually declined, to the point that in early 1962 he sent a letter to the shah denouncing the repression of demonstrations and call­ing for free elections. The letter was so brusquely worded that the shah refused to accept it, but relations between Behbahānī and the government were not entirely ruptured, for during the remaining months of his life he received visits from Prime Minister Asad-­Allāh ʿAlam. death was marked by official mourning. The body was sent to Najaf for burial.

He was survived by one son of note, Jaʿfar Behbahānī, who sat in several sessions of the Majles and devoted himself to issues close to his father’s heart.