The revered leader of the Islamic Movement in Nigeria, Sheikh Ibraheem Zakzaky (H) has been in illegal detention under the Muhammadu Buhari regime since its inception.

The brutal clampdown on the movement by the Nigerian Army in December 2015, a few months after the regime was sworn-in, attracted world’s attention and was condemned as a massacre and genocide by major reputable global rights groups.

Over 1000 followers of the revered leader were butchered between 12th to 14th of December 2015 in Zaria including men, women, and children. Some were burned alive, some killed at close ranges and others buried alive by the team of murderers that were commanded by Buhari, Burutai, and Elrufai. This is not talking about hundreds that were subsequently killed in street protests across the northern states and the Federal Capital Territory, Abuja.

All known laws were violated in the treatment meted on the movement, including the Geneva Convention but hypocritically and mischievously, the killing was shamelessly justified by the government, some Sunni sectarian extremists and the blind supporters of Buhari claiming that the followers of the Islamic leader blocked the way of the Chief of Army Staff, Gen Tukur Buratai.

The residence of the revered Sheikh Zakzaky was set ablaze by the Nigerian army where he was taken custody. The house was subsequently demolished by the state government and the rubbles packed to an unknown location to hide the evidence of burning human beings alive, using heavy weapons in unarmed civilians and a display of state terrorism by the government.

All efforts by the government to blackmail the movement and Sheikh Zakzaky proved abortive as the movement, despite the suppression meted on it, sorted for redress through peaceful and legal means.

It is as a result of the movement’s effort to prove that it is non violent that it won a case against the Nigerian government where a competent court of jurisdiction, the Federal High Court, ruled that the revered Sheikh Zakzaky be released, a house be provided for him by the government and be compensated to the tune of N25 million each for him and his wife. It also ordered that he be provided special security by the Nigerian police until he feels safe from any attack.

The Nigerian government shamelessly acted in contempt of court and refused to obey the order. In order to justify his continued  detention, a member of the clique of murderers, who is also the governor of Kaduna state, Nasiru Elrufai mischievously concocted another case in Kaduna High Court falsely accusing the revered Sheikh Zakzaky and his wife of abetting killings of innocent persons known to have been killed by the Nigerian army and the police in Kaduna where he is the chief security officer.

More than three years of the Zaria massacre, there is no clear understanding as to why the government launched a terror attack on the unarmed movement.

Along the way, it came to be revealed that it was a plot by America, Israel, and Saudi Arabia to eliminate what they call Iranian influence in the largest black nation in the world.

This didn’t bother some of the Nigerians much, especially the blind supporters of Buhari and the sectarian extremists.

Human right activists, Christian groups and others have all condemned the Nigerian government of genocide and this has even taken the matter to the International Criminal Court in the Hague. The case on the movement at the ICC has since passed the preliminary investigation.

Just of recent, it became clear that Sheikh Zakzaky is being molested and suppressed by the Nigerian government because he is a threat to neocolonialism and imperialism taking place in Nigeria today.

Sheikh Zakzaky revealed the incident taking place in Zamfara state and places like Birnin Gwari in Kaduna state. He explained that it is a plot and those in power are signatories to it. They are supported into power through a deceptive process called an election in order to serve the interest of their masters in Europe and America.

They are aware of natural resources deposits, like gold in Zamfara and Birnin Gwari where they want to clear the people there, establish mining fields, landing and take off fields, and foreign military base to enhance the stealing of the resources by those foreigners who are the funders of the killings.

Now that the killings are getting out of hands and more and more Nigerians are becoming concerned about the terror activities, the Nigerian government, out of fear of revolt, is deceptively stopping mining activities in Zamfara and sending the foreigners out of the country.

This plot has since been revealed over six years ago by Sheikh Zakzaky where he advised against the killing of innocent lives and toying with Islam in the mame of religious terrorism. He advised that due processes be established in exploiting such resources and not through deception and inducement of terrorism.

It is now clear that Sheikh Zakzaky is the true savior of Nigeria and Nigerians whose six sons were killed by the alliance of the Nigerian government and the foreigners. He sacrificed his life and everything he has to save Nigeria from invasion by the foreigners who are after the abundant natural resources in the stretch from Sokoto to Maiduguri.

It is now the duty of Nigerians to rise and free the Sheikh and follow him to the path of true freedom and emancipation from the leadership of stooges who exchange the lives of their people for power and wealth. It is now clear why they are after the life of Sheikh Zakzaky.

The article was written by Abdulmumin Giwa and first published in tehrantimes.

Previous Book: Fasting: A Haven from Hellfire
Next A Summary of Ruling +PDF 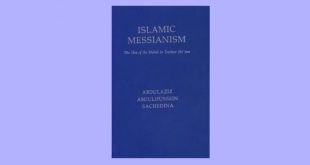 Islamic Messianism: The Idea of Mahdi in Twelver Shi’ism

For more than a millenium the idea of the future coming of the Mandi has provided Shi'i piety with a unique aspiration in the redemption through the appearance of the twelfth Imam....