US Muslims Launch Campaign to Show Faith’s Regard for Jesus

To help educate people on the significance of Jesus in Islam, Ahmed’s group, The Humanitarians, a Muslim interfaith organization, is launching a monthlong campaign that includes billboards along high-trafficked areas in Arizona along with radio ads.

Ahmed, the group’s founder and outreach coordinator, said the intent is to highlight similarities between Islam and Christianity and bring people together during the holidays.

“We want to educate people on who we (Muslims) are and who we are not and show people that there are more similarities between the faiths than differences,” Ahmed said Tuesday during a news conference at the Islamic Community Center of Tempe.

Ahmed said Muslims recognize Jesus as one of Allah’s prophets. His mission, Ahmed said, was to invite people to worship God.

He said there are six articles of faith in Islam that include believing in all of God’s prophets. That includes Jesus, he said.

“If you don’t believe in Jesus, then you cannot be Muslim,” he said.

Muslims, like Christians, believe Jesus was born to the Virgin Mary, Ahmed said. They believe there is a creator and a higher power. Muslims also believe there is an afterlife and that people are accountable to God for their actions on Earth.

There are more miracles related to Jesus in the Quran than there are in the Bible, Ahmed said.

Christian denominations believe that Jesus was more than a prophet, the only son of God and one with God who prophets before him predicted would arrive. Christians view him as the savior who died for their sins. 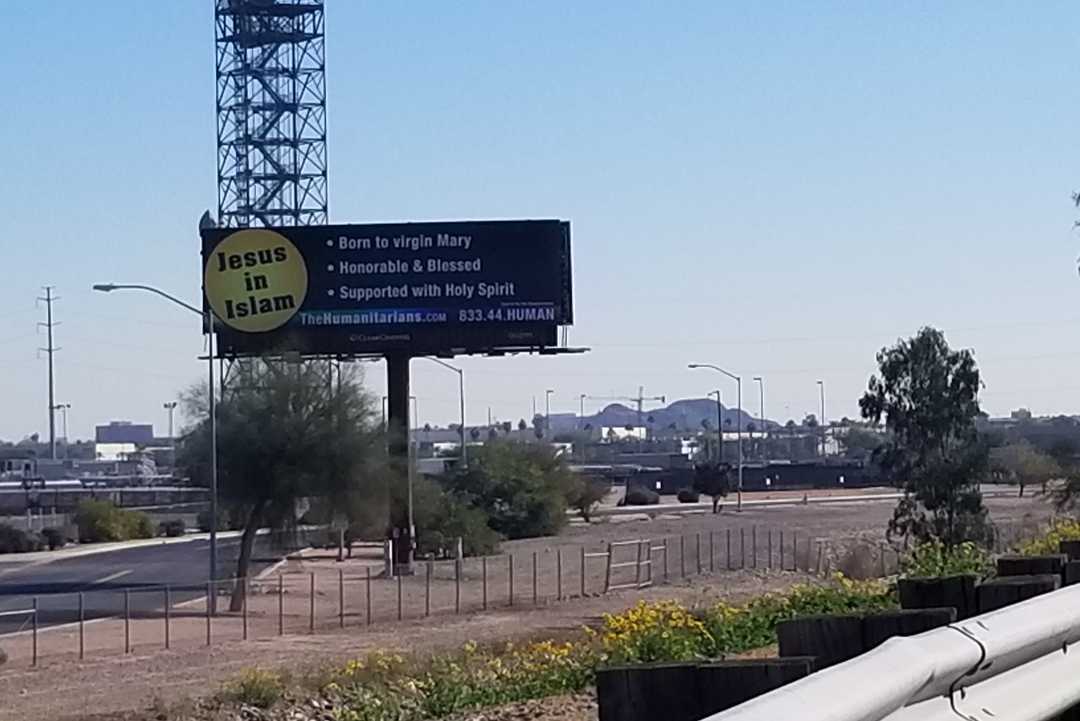 The Arizona chapter of The Humanitarians bought two billboards on Interstate 10 — one near Phoenix Sky Harbor International Airport and another in Tucson near Prince Road.

The billboards, which Ahmed said cost $10,000, state in bold, white letters three Islamic beliefs about Jesus: Jesus was born to the Virgin Mary; he is honorable and blessed; and God supported Jesus with the Holy Spirit.

The billboards were unveiled last week and will be up for a month, Ahmed said.

As part of the campaign, the group also is running radio ads from Dec. 24 to Dec. 26 and doing a big push on social media. It has held open houses at different mosques and members are speaking at K-12 schools and universities.

He said the group has received about 40 calls from Arizona residents interested in learning more about Islam and the similarities between the different religions.

Similar campaigns are happening in other cities nationwide, he said.

Ahmed said although unity should be celebrated year-round, The Humanitarians chose to launch this campaign in December because people are more spiritual during this time of year. He said Jesus is also a central figure in Christian holidays.

“We want to let Christians know how much we love, admire and respect Jesus,” Ahmed said.

He said he hopes that once groups see there are more similarities than differences, they can work together to tackle other issues such as poverty, racism, gun violence and extremism.

“First, we have to do away with the fear of the unknown. Second, we have to educate each other on the commonalities of the faiths,” Ahmed said. “And once we overcome that barrier, we can join together to better humanity.”

The Rev. Larry Fultz, director of the Arizona Interfaith Movement, said while he was not aware of the campaign, it’s a message he supports.

He said especially during such politically divisive times, celebrating the similarities between different groups is important.

“Anything that any group is doing to encourage dialogue, I’m for it. That’s our mission, to find things we have in common,” he said.

Previous US Congresswoman to Use Quran for Swearing-in Ceremony
Next Book: Sociology of Shiʿite Islam +PDF