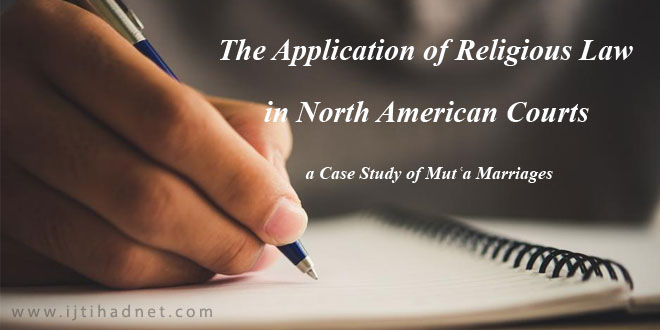 The Application of Religious Law in North American Courts: a Case Study of Mutʿa Marriages

The tradition of marriage has long been a fundamental aspect of religious societies. As with most religious traditions, Islam has texts, found in the Qurʾan and Sunna, that govern this contractual relationship in some detail. Various schools of thought within the Shiʿi tradition differ from Sunni traditions with regard to the contractual relationship of mutʿa, or temporary, marriages. There is much controversy over the use of mutʿa marriage contracts in North America, and scholars, both Sunni and Shiʿi, are unable to agree on the legality and terms of this unique relationship. Within the last few years, Western courts have grappled with the complex interpretation of Islamic law in the context of these mutʿa marriages. This comparative study examines the legal requirements for marriage in Islam as well as the legal requirements for mutʿa within Shiʿi traditions. The article compares the two concepts based on their religious mandates, discussing advantages and disadvantages of both permanent and temporary marriages and analyses approaches to mutʿa taken by courts in the United States and Canada, as well as exploring the differences between permanent and temporary marriages.

Title: The Application of Religious Law in North American Courts: a Case Study of Mutʿa Marriages

The Application of Religious Law in North