Home / All / Fiqh & Socitey / Take a Journey through Hawza Ilmiyyah 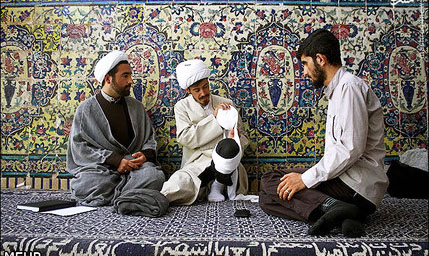 Take a Journey through Hawza Ilmiyyah

Allow me to take you through a journey, only a few steps but worth its weight in gold, into a timeless world of knowledge and wisdom acquired from the Holy Imams (a).

Allow me to take you through a journey, only a few steps but worth its weight in gold, into a timeless world of knowledge and wisdom acquired from the Holy Imams (a). Being a revert to the Ithna Ashari school I was initially oblivious to what the word Hawza meant.

It’s a place which has established an influential footing in today’s world and which also has a deep history tracing its roots backs to the knowledge of the prophets and Imams. This captured my attention and just like a seed grows so did my eagerness for the Hawza. The following hadith is an interaction between a Jewish man and Imam Ali (a):

One day a Jewish man came to Imam Ali (a), with the intention of delaying his prayers asked: “You claim to know everything in this world, then tell me, which animals lay eggs and which animals give birth?”
The Imam looked back at him, smiled and said: “The animals with ears protruding out give birth and the ones who have ears inside their heads lay eggs.”

I was amazed by what I’d read but how accurate is the answer? Nowadays we have the ability to find the answer with a click of a button. I looked into this matter and found Imam’s statement to be as true today as it was then. Just to be sure I asked around and someone suggested I ought to check animals like dolphins and whales because they are mammals – they give natural birth but they are creatures of the sea. On closer inspection they do have external ears, a small pinhole behind each eye and these ears are up to seven times more sensitive than our ears.
While writing this I thought about making one last thorough check just to be sure. To my surprise a few animals with internal ears did give birth. One of them is a snake called a boa constrictor. If this statement was made by any ordinary person we would all congratulate him/her for such an accurate prediction, but this statement came from an infallible Imam. Could this snake be outside his knowledge? Or could the narration of this 1400-year-old hadith be incomplete? The Imam (a) could have said “all animals with the exception of x, y, and z follow this rule.” Therefore, this part did not reach us through the narrations. Another reason could be, the Imam gave him a general answer which is plausible in its own right. I’ll leave that for you to decide.
This Hadith (narration) was one of the reasons why I joined the Hawza. The answer is accurate, eloquent and stood the test of time. This could only mean Imam Ali (a) had the proof for his claim of “knowing everything in this world.” I wanted to have access to this knowledge and the place they teach it is at the Hawza. So I joined Hawza Ilmiyyah of England.

Like going to school for the first time, I didn’t know what to expect. I didn’t have any Shia friends to answer my questions; I came equipped only with what I learnt on the internet. Irrelevant questions like; will I be accepted? Is it like university? Am I making the right choice? How long will it take to fully understand the Qur’an?

Walking 10 minutes late into my first lesson, about hadith in a room filled with unfamiliar faces all sat facing the teacher, the men at the front the ladies at the back. Nothing seemed right, I was out of my comfort zone and didn’t understand some of the terminology. At the same time I felt a sense of relief, the sort of feeling you get after a long journey, but only to realise my journey had just begun.

Later that evening the opening ceremony was held. I tried to listen intently, we were sat on Persian carpets and after a few minutes my legs started to ache. Adjusting to another position; a few minutes later the pain came back so I moved this way and that trying not to annoy anyone around me. It seemed impossible to find a comfortable position. I heard one of the sheikhs quote his teacher in Qom: “coming to the Hawza you’ve defeated one shaytan, to stay in the Hawza you’ll have to defeat hundreds more. I was thinking a few shayateen are already at it, making it hard for me to find a good seating position.

After nearly two years at the Hawza, I would say it is similar to a university but very different at the same time. For example the focus is more on the students learning the concepts rather than getting ready for exams. The labour of love can be felt in every aspect of the Hawza, which is unique. At university I was taught what to think but in the Hawza I’m being taught how to think.

In the Arabic text, the word ‘innama’ (only) is used to give Akhlaq exclusivity, which places Akhlaq in the same league as Aqa’id (Islamic belief) and Fiqh (Islamic Jurisprudence). In this life we are on the path to perfection and Akhlaq plays a vital role. Everything we learn in Akhlaq is theory; the aim is to have a complete noble character and the only way to get there is with practice.