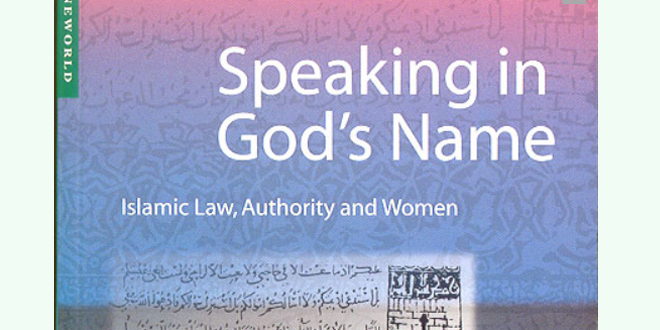 A challenging new book that reviews the ethics at the heart of the Islamic legal system, and suggests that these laws have often been misinterpreted by authoritarian readings of the sources, resulting in the repression of Muslim women. Using both religious and secular sources, the author proposes a new approach that returns to the original spirit of the Muslim legal system in a provocative and thoughtful book that should be required reading for all those interested in Islam, law or women’s rights.

It is often maintained that Islamic jurisprudence is the heart and kernel of the Islamic religion. Traditionally, Islamic jurisprudence has been the arena in which the conditions, dynamics, and meanings of the relationship between God and human beings were explored. It is certainly true that Islamic jurisprudence is one of the crowning achievements of Islamic civilization; it is the repository of a subtle, complex, and illimitably rich intellectual heritage. Admittedly, however, I do not believe that, for the most part, this richness has survived the trauma of colonialism and modernity. In fact, I fear that today the remnants of the classical Islamic jurisprudential heritage are verging on extinction. Furthermore, I think that one of the most poignant manifestations of this unfortunate reality is the spread of a trenchant authoritarianism in contemporary Islamic legal determinations. The epistemology and normative premises that guided the development and flourishing of the classical jurisprudential process are now defunct, and whereas the classical jurisprudential tradition, I think, faithfully projected basic constitutional premises that were anti-authoritarian in character, the same cannot be said about the current reality.
This book does not present an anthropological or sociological study of Islamic legal practice in the modern age. This is a work of legal theory and not a work on anthropology or sociology. The basic aim of this book is to present a conceptual framework for the idea of authority, and for identifying an abuse of authority in Islamic law. I am not referring here to institutional authority, but to persuasive or moral authority. As such, the primary focus of this book is on the notion of the authoritative in Islamic law, in contrast to the authoritarian. At a broader level, this book explores the idea of speaking for God without pretending to be God or, at least, without being perceived, for all practical purposes, as God. Dealing with God’s law inevitably involves an intricate balance between the sovereignty of the Divine, human determinacy, and morality. Working from within the Islamic legal tradition, I offer a normative proposal for achieving this balance. I am sure that some will argue that it is impossible to attempt to represent God’s law without descending into one form of authoritarianism or another, and that hoping to achieve the balance that Iam proposing is at best naive. Nevertheless, I believe this is a separate issue, and I do not deal with the challenges or the meaning of secularism in this book. The focus of this book is more narrow; I assume the relevance and desirability of the Islamic juristic tradition, I analyze its theory of authority, the misuse and misrepresentation of this theory in the contemporary setting, and I propose solutions for resisting the authoritarian tendencies in the practice of Islamic law.

The book is divided into seven chapters and a conclusion. The first chapter, named the `Induction’ identifies the central themes and the basic assumptions of the work. I did not name this chapter the `introduction’ because it is not intended simply as an explanatory note for the rest of the book. Properly speaking, it makes no formal introductions but extends an invitation or inducement to become intellectually, and emotionally, involved with this book’s investigations. It does so by raising a series of questions and by sharing with the reader some of the author’s own assumptions and intellectual dilemmas. Many readers, justifiably, skip reading the introduction and start with the first chapter. In this work, the induction is a necessary invitation to the rest of the work. The second chapter explores the idea of the authoritative in Islamic law by analyzing the notion of Divine sovereignty, the role of deference in the construction of authority, and the function of jurists. The third chapter functions as a summary transition into the fourth and fifth chapters. Chapters Four and Five are somewhat abstract and detailed, and so the third chapter has been written in deference to those who might not be interested in the finer points of my argument. Although Chapter Three is not an adequate replacement for the fourth and fifth chapters, the reader may want to jump from the third to the sixth and seventh chapters. The fourth and fifth chapters study the role of the text in the determination of meaning. In this context, Iset out the theory and conditions for the authoritativeness of jurists in Islam, and the process pursuant to which one can say that the jurists have abused their authority. The second, third, fourth, and fifth chapters lay the foundations for a critical analysis of particular abusive legal practices in modern Islam, which is the task of the sixth and seventh chapters. The sixth and seventh chapters present case studies in the construction of the authoritarian in modern Islamic legal practice. Most of the case studies focus on responsa dealing with legal issues related to women. I have chosen these responsa in particular because, more than any others, they demonstrate the misuse and abuse of God’s authority in order to impose a suffocating patriarchy upon Muslim society. Furthermore, I think that gender-related issues present some of the most difficult and complicated challenges to contemporary Islamic law, and it is imperative that Muslim legal specialists start to develop coherent and critical ways of dealing with these issues. Importantly, however, this book does not belong to the genre of gender studies or feminist jurisprudence. I do not have the competence to engage these discourses. In addition, my primary aim in this work is to develop a conceptual framework for analyzing Islamic legal determinations according to their own frame of reference. In the Islamic context, gender studies and feminist jurisprudence raise controversies that I am not eager to engage. I leave this to more resolute hearts.

This book has had a rather long and, at times, unpleasant history. It started out about five years ago as a short essay criticizing a misogynist legal responsum issued by a Muslim organization in the United States. At that time, what troubled me the most about the responsum was the fact that it presented a determination that was demeaning and degrading to women as the indisputable and unchallengeable will of God. My training in the classical legal tradition allowed me to recognize the remarkable amount of evidence ignored or suppressed by that organization, and, yet, it seemed to me that too many Muslims in the United States were willing to accept the responsum as the one and only will of God. The more I thought about and investigated the dynamics of Islamic law in the United States, the more I was troubled by the superficiality, frivolity, and even, at times dishonesty of these dynamics. There was no coherence, no method, no principled approaches, and no jurisprudence. Islamic juristic discourse in the United States consisted of a battle between the hadith-hurlers – each party surveys the traditions of the Prophet to find something that can be hurled at the opposite party, and the other parties, naturally, do the same. Very few of the proclaimed scholars of Islamic law in the United States seemed to have any interest in developing a systematic and critical discourse on God’s law. Frankly, it appeared to me that Islamic law had become the pastime activity of intellectually challenged and, otherwise, stolid individuals. For the most part, I was wrong.

The problem was not the state of Muslim pseudo-intellectualism in the United States — the problem was much larger. The problem was the disintegration and abandonment of the traditional premises upon which Islamic law was constructed, without their replacement with a viable alternative. Most of the determinations of the various hadith-hurling parties in the United States mirrored and relied on the discourses of various factions in the Muslim world as a whole. So, for instance, legal determinations by some organizations in the United States that exhibited a psychotic contempt of women were mere transplants of the determinations of influential Muslim organizations in some Muslim countries. Put simply, the methodological shortcomings were endemic to Muslim legal discourses at large.

As a result of this thought process, I expanded the short essay into a modest and rather bashful book entitled, The Authoritative and Authoritarian in Islamic Discourses: A Case Study, published by an Islamic press. The book used a case study method by focusing on the responsum of a particular Muslim organization as a way of raising the larger issues related to despotism in the practice of contemporary Islamic law. That book was eventually translated into Arabic by Professor Adil Asfur at Ain Shams University in Cairo. This was the beginning of a rather interesting journey. The English book received enthusiastic support by some Muslim intellectuals, but was demonized in many other contexts, with the usual unpleasant encounters for the author and publisher. The book was banned in some influential Muslim countries, and as a result, was never published in Arabic. I am not claiming any heroism; in truth, it is the publisher of the English book, Quill Publishers (formerly Dar Taiba), and the publishers that attempted to print the book in Arabic who withstood the brunt of the consequences. Although the English book immediately sold out, the publisher, because of its brave stand, sustained considerable collateral financial losses. At this point, Ebrahim Moosa, a formidable Muslim intellectual and scholar, urged me to expand and develop the earlier book into a full-length study, and kindly introduced me to Oneworld Publications. As a result, this book was born.

This book is quite different from The Authoritative and Authoritarian. Other than the fact that this book is three times as long, I have dropped all references to the USA-based Muslim organization and its responsum, and I have developed a more comprehensive approach to the issue of authority in Islamic law. Importantly, I have changed my mind about several issues discussed in the first book, hopefully, for the better. In developing the theory of the authoritative and authoritarian, I have added an analysis of a group of responsa by one of the most influential, if not the most influential, legal institutions in the Arabic-speaking Muslim world. As I have noted in the conclusion, I am not thrilled about criticizing the determinations of such an influential organization but I can find no alternative. Those who read Chapters Six and Seven will understand what I mean. I am hoping to set a higher and more demanding, principled standard for Islamic juristic discourses in the modern age. I do not, however, intend to belittle or demean anyone. Nothing I say in this book should be taken as a form of casting doubts upon the piety of the jurists of this, or any other, organization. Their piety is something that is between them and God, and it has no relevance for the discussion in this book.

Dr. Khaled Abou El Fadl is one of the most important and influential Islamic thinkers in the modern age. An accomplished Islamic jurist and scholar, he is a professor at the UCLA School of Law, where he teaches Islamic law, immigration law, human rights law, and international and national security law. As the most critical and powerful voice against puritanical and Wahhabi Islam today, he regularly appears on national and international television and radio, including CNN, NBC, PBS, NPR, and the Voice of America (broadcast throughout the Middle East).