Home / All / Shias Faced Poverty, Political Exclusion and Discrimination in 2019 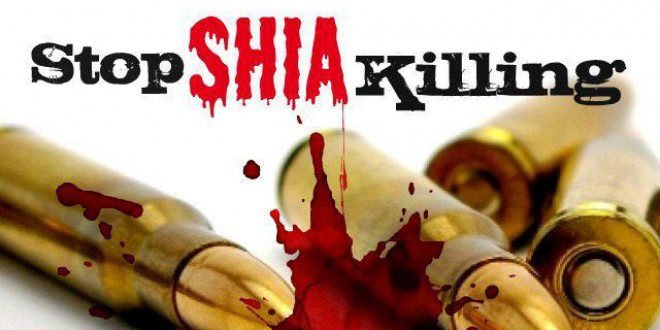 Despite appeals from human rights groups, activists are deeply concerned about the worsening levels of violence against Shias; murder and repression against the men and women. The year 2019 may be remembered as the time when Shias around the world faced with situations of poverty, political exclusion and discrimination.

This situation fosters extreme inequality and impacts negatively on the fundamental rights of the Shias. So, they took to the streets across Asia, Africa and the Middle East demanding change.

Take a look at the biggest issues in 2019 that Shias were victims of the violence and repression:

Nigeria: Shias who met with bloodshed

Evidence of this situation can be found clearly in events such as Kaduna Shias protest to release of leader El-Zakzaky, the founder and leader of the Islamic Movement of Nigeria (IMN). The latest round of protests and the ensuing deadly crackdown has raised concerns, with rights groups calling for an investigation into the killings. However, IMN said it will continue protesting until it secures the release of Zakzaky.

“The authorities should bring an end to their violent crackdown on the Shia Islamic Movement in Nigeria,” Anietie Ewang, Nigeria researcher at Human Rights Watch, said in a statement.

Ibrahim Zakzaky, has been in custody along with his wife Zeenah Ibrahim since their arrest in December 2015 and rights groups say saw the army kill some 350 of his followers and bury many in mass graves, france24 told. A court in 2016 ordered the release of Zakzaky and his wife — but the authorities refused.

“The oppressed, pacifist Sheikh (Zakzaky) has millions of faithful fans and if his life is threatened, peace and security would be endangered,” the Beautiful Peace Institute said in a letter to Guterres released. Moreover, the human rights group called on the UN chief to push for immediate treatment and release of the top Shia cleric.

In such a context, the Shia movement was outlawed in its home state of Kaduna, Hawzah News mentioned. The decision to label the IMN as a terrorist organization came after deadly clashes between security services and IMN members in July, who were protesting the continued imprisonment of their leader, Sheikh Ibrahim el-Zakzaky. HRW has denounced a recent Nigerian court ruling that bans the movement led by jailed Muslim cleric Sheikh Ibrahim al-Zakzaky, calling on the Abuja government to reverse the ban, which prevents the group’s members from “exercising their right to carry out peaceful activities, Al Jazeera reported.

It is not clear what strategy the Abuja government is following with respect to the IMN, but Zakzaky’s issues with the Nigerian government are unlikely to be resolved anytime soon. But appeals from human rights groups to release of leader El-Zakzaky will continue in 2020. Shia movement and, human right activities will emphasize that a religious procession or peaceful protest over the detention of Zakzaky should not end in bloodshed.

Saudi Arabia faces growing criticism for its mass execution of a group comprised mostly of people from the kingdom’s Shia Muslim minority, some of whom the U.N. said were minors when charged.

In 2019, Saudi Arabia’s top court upheld the death sentences of 14 men convicted of armed attacks, all of them from the Sunni-ruled kingdom’s Shia Muslim minority, a local newspaper reported. Amnesty International, in a statement, urged King Salman not to ratify the death sentences, according to Middle East Eye.

A court in Saudi Arabia has sentenced Shia cleric and human rights activist Sheikh Mohammed al-Habib to 12 years in prison and imposed a travel ban on him, Presstv reported.

Saudi Arabia quietly beheaded 37 people, mostly Shia men from the country’s Eastern Province. They had all been sentenced in what international human rights organisations called “grossly unfair” trials. Many of them had alleged they were tortured into signing false confessions.

In the latest event, sources reported that two Saudi Shia youth were shot dead by al-Saud forces in the Dammam area, according to Al-Ahed News. Al-Sawid and Al-Namar, who had gone to al-Anood in al-Dammam city to repair their own car, were shot dead by Saudi security forces.

Reportedly, the two men were killed during a deliberate operation by Saudi forces to assassinate Shia activists in al-Dammam city, Japan Times told.

Saudi measures clearly meant to stir fear within the Shia minority, which makes up between 10 and 15 percent of the Saudi population and is mostly based in the Eastern Province. A crackdown led by Crown Prince Mohammed bin Salman against pro-democracy campaigners, Shia Muslim preachers and intellectuals continues unabated in the country. Human rights defenders continue to work in defending victims of human rights violations in 2020.

The Al Khalifa regime has killed and injured hundreds of people and thrown behind bars thousands of shias political activists, leaders and human rights defenders who seek the rule of law and democracy in Bahrain. The Bahrain Human Rights Watch Society has described this country’s judicial system as a cruel body without any independence. The rights group reiterated that Bahraini courts have a major role in the regime’s suppression of peaceful protesters who seek democracy and the rule of law in this Country.

Media reports disclosed events that Shias are victims of the violence and repression.

Strip the citizenship of 92 Shias jailed for plotting to form a “terror” group. In April’s original court ruling, the prosecutor said 69 defendants were sentenced to life in jail, 39 to 10 years, 23 to seven years and the rest to between three and five years imprisonment. Amnesty described the sentences as “outrageous” and a sign of Bahrain’s authorities’ disregard for international judicial standards, according to dawn.

Sayed Ahmed AlWadaei, the director of the Bahrain Institute for Rights and Democracy (BIRD), lives in exile in the UK. His mother-in-law, brother-in-law and cousin were arrested and sentenced in 2017 for planting a fake device.

A Bahraini court sentenced 167 people arrested in 2017 at a sit-in outside the home of Bahrain’s leading Shi’ite Muslim cleric to between six months and 10 years in prison at a trial in late February, court documents and lawyers said.

As expected, the Al Khalifa regime in Bahrain started its annual campaign of piling up pressure on the Shia majority when they make preparations for the mourning ceremonies for 3rd Shia Imam, Hussein ibn Ali (A.S.).

Moreover, the women were targeted as part of a concerted state effort to crack down on free speech.

Conducted by the London based Bahrain Institute for Rights and Democracy (BIRD) and the ADHRB, the report revealed that the women were arrested without search warrants and were subjected to physical, psychological and sexual assaults during interrogation. Coerced confessions were also used as evidence to sentence them, telesurenglish reported.

Of the nine women, three are still held in prison in dire conditions, such as being denied access to medical care. The other six have been released after serving their prison terms.

According to Hazara lawyer and human rights activist, Sardar Sahil, Hazaras in Pakistan have peen living under a condition similar to a siege for the past 10-15 years due to religious-ethnic attacks. He adds that although Quetta authorities provided them with security, they feel segregated. Sahil says he is dependent on a bodyguard and always carries a gun on himself.

The United Nations estimates rebel groups affiliated with Pakistan’s Taliban have killed at least 1,500 members of Hazara community in the past decade. Suicide bombings, targeted assassinations and explosions are among various forms of the continuous violence against the Hazara. The UN stresses that living in protected areas and have denied Hazaras of many economic opportunities.

Nasir says in spite of the government’s attempts to protect the Hazaras, Takfiri rebels still carry out carnage against them: the latest was a huge explosion in April 2019 that left 24 people dead, one-third of them Hazaras. Lashkar-e-Jhangvi claimed the responsibility. It was the worst since deadly explosions in early 2013 that left almost 200 Hazaras dead.

Two years ago, in Afghanistan thousands of Shias  fled their homes in two Hazara-dominated districts to escape the “absolute terror” of escalating violence by Taliban, with some described the violence as the worst they had seen in the 17-year conflict.

As a result of the deadly incident which occurred on November 2018, hundreds of people, including civilians, militia, commandos and militants killed. Many families have fled to the provincial capital, some leaving their homes in the middle of the night and travelling on side roads to avoid Taliban checkpoints, DAWN reported.

At the time, one senior official said at least 35 civilians, mainly Hazaras, and over 50 members of the elite Special Forces had been killed in the clashes. He estimated that more than 7,000 people have fled from Jaghori and Malistan either to Ghazni or into neighboring Bamiyan and more than 3,000 homes had been razed.

The danger of extremist groups in Afghanistan and Pakistan who target Shia civilians still continues.

The minority Shia community in Sunni Muslim-majority Malaysia has been subject to discrimination and persecution by authorities.

Back in 1996, the Fatwa Committee for Religious Affairs in Malaysia issued a religious opinion recognising Sunni Islam as “the permitted form of Islam” in the country and branding Shia Islam as “deviant”. In doing so, it prohibited the Shia Muslim community, which has around 250,000 members, from spreading their beliefs and allowed Malaysian security forces to raid Shia gatherings.

Eight men were detained by religious authorities and police in southern Johor state during a Shia event at a private residence.

According to a Malaysian human rights commission inquiry, the country’s police is behind the disappearance of a Shia Muslim who was kidnapped by masked men more than two years ago.An enforced disappearance means the arrest, detention or abduction of a person by agents of the state. The three-member panel, which began investigating the cases in October 2017, called on the government to open a new and independent investigation and criticised parts of the official investigation into one of the cases as an “affront to common sense and logic”, Times told.

Through their actions, human right activities help uncover human rights violations, bring them to public attention and call for fair and just solutions in 2020.

This article was written by Leila Yazdani and first published in Shafaqna. 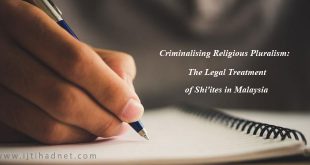 Criminalising Religious Pluralism: The Legal Treatment of Shi’ites in Malaysia

This article explores the transnational contest over sacred authority in contemporary Shi’i Islam as it plays out between contemporary maraji’ (sources of emulation) and the...