This volume focuses on the workings of three universities with global outreach, and whose graduating students carry the ideas acquired during their education back to their own countries, along with, in some cases, a zeal to reform their home society.

Published in Association with the Institute for the Study of Muslim Civilisations Explores the influence of centres of Islamic learning in Saudi Arabia, Iran and Egypt Claims abound that Saudi oil money is fuelling Salafi Islam in cultural and geographical terrains as disparate as the remote hamlets of the Swat valley in Pakistan and sprawling megacities such as Jakarta. In a similar manner, it is often regarded as a fact that Iran and the Sunni Arab states are fighting proxy wars in foreign lands. This empirically grounded study challenges the assumptions prevalent within academic as well as policy circles about hegemonic power of such Islamic discourses and movements to penetrate all Muslim communities and societies. Through case studies of academic institutions the volume illustrates how transmission of ideas is an extremely complex process, and the outcome of such efforts depends not just on the strategies adopted by backers of those ideologies but equally on the characteristics of the receipt communities.

In order to understand this complex interaction between the global and local Islam and the plurality in outcomes, the volume focuses on the workings of three universities with global outreach, and whose graduating students carry the ideas acquired during their education back to their own countries, along with, in some cases, a zeal to reform their home society.

Masooda Bano is Associate Professor in the Oxford Department of International Development, and Senior Golding Fellow, Brasenose College, University of Oxford. She is author of The Rational Believer: Choices and Decisions in the Madrasas of Pakistan (2012) and Female Islamic Education Movements: The Re-Democratisation of Islamic Knowledge (2017), and co-editor of Women, Leadership and Mosques: Changes in Contemporary Islamic Authority (2012) and Shaping Global Islamic Discourses: The Role of al-Azhar, al-Medina, and al-Mustafa (Edinburgh University Press, 2015, 2017).

Part I. Making of the Global: Inside the Three Universities
1. The Islamic University of Medina since 1961: The Politics of Religious Mission and the Making of a Modern Salafi Pedagogy, Mike Farquhar
2. Making Qom a centre of Shiʿi scholarship: al-Mustafa International University, Keiko Sakurai
3. Protector of the ‘al-Wasatiyya’ Islam: Cairo’s al-Azhar University, Masooda Bano

Part II. Returning Graduates in Negotiation with the Local
4. Ahlussunnah: A Preaching Network from Kano to Medina and Back, Alex Thurston
5. Qom Alumni in Indonesia: Their Role in the Shiʿi Community Zulkifli
6. Islamic Modernism, Political Reform and the Arabisation of Education: The Relationship between Moroccan Nationalists and al-Azhar University, Ann Wainscott 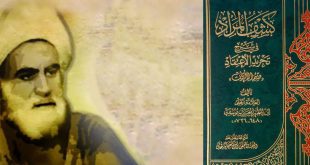 Allamah al-Hilli on Imamate in his Kashf al-Murad, Part 2

ashf al-Murad is one of the most widely read of Allamah al-Hilli's publications as it is the first commentary written on Allamah al-Tusi's work. This part continues with discussions on the proofs for the Imamate of Ali, his superiority to the...