Home / All / Fiqh & Socitey / “I Don’t Count the Shias as the Kafir Anymore”: Wahhabi Mufti

“I Don’t Count the Shias as the Kafir Anymore”: Wahhabi Mufti

The former leader of the congregational prayer of the Great Mosque of Mecca who is one of the famous Wahhābī muftis declared explicitly that he had changed his view in which he had considered the Shias as unbelievers.

After 10 years from his previous decree (fatwa) according to which he had considered the Shias as unbelievers, ʻĀdil ibn Sālim al-Kalbānī, the former leader of the congregational prayer of The Great Mosque of Mecca who is one of the famous Wahhabi muftis, declared in a TV program that he no longer considers the Shias as unbelievers.

“I swear by Allah that nobody has forced me to hold this view”, emphasized this Wahhābī scholar.

He said that he changed his viewpoint because of a book titled Takfīr Ahl al-Shahādatayn by Shaykh Sharīf Ḥātam al-ʻAwnī (another famous Wahhābī mufti) in which there are many traditions including ʻAbd al-Wahhāb’s statements, that indicate Muslims must not be called unbelievers.

During an interview with BBC Channel in May 2009, Al-Kalbānī had called the Shia scholars unbelievers and said that they had no right to have a representative in the Council of Senior Scholars. These statements had met with fierce criticisms at the time. 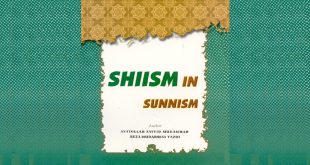 The purpose of this book is to prove Imamate via Nass and mostly traditions narrated by the Sunnis and is organized in such a way to be helpful for...