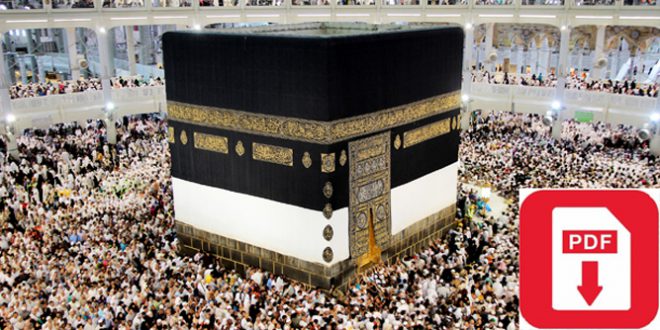 These six chapters are included in the first part of the Book al-Fiqh ‘ala al-madhahib al-khamsah (Fiqh according to five schools of Islamic Law), which was published first by Dar al-‘Ilm li al-Malayin, achieving unprecedented circulation, that prompted this foundation to republish it for the second, third and fourth time, all of which have run out of print.

The second section of Islamic fiqh contains the Individual conditions (al-‘Ahwal al-shakhsiyah), that include: marriage, divorce, will and bequest, endowment (waqf ) and legal disability (hajr), which constitute the second part of the book published by Dar al-‘llm li al-Malayin, whose copies have run out of print.

At the beginning, in order to make it easier for the reader to follow the opinions of the five schools of fiqh about various aspects of Hajj, we shall briefly outline their sequence as ordained by the Shari’ah.

The Hajj pilgrim coming from a place distant from Mecca assumes ihram from the miqat on his way, or from a point parallel to the closest miqat, and starts reciting the talbiyah. In this there is no difference between one performing ‘Umrah mufradah or any of the three types of Hajj (i.e. tamattu, ifrad, qiran). However, those who live within the haram of Mecca assume ihram from their houses.’

Title: Hajj The Islamic Pilgrimage According to The Five Schools of Islamic Law