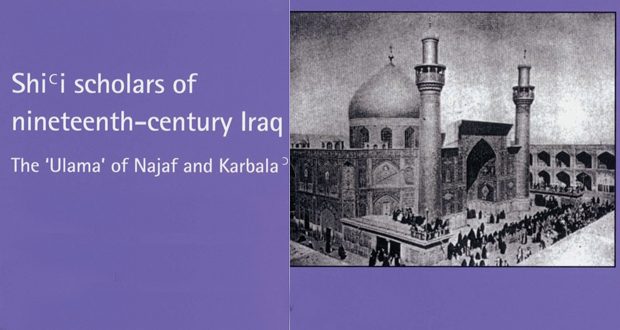 The book “Shi’i Scholars of Nineteenth-Century Iraq: The ‘Ulama’ of Najaf and Karbala’” was written by Meir Litvak and published by Cambridge Middle East Studies in 2002.

In the nineteenth century, the shrine cities of Najaf and Karbala in Ottoman Iraq emerged as the most important Shi’i centres of learning. In a major contribution to the study of pre-modern Middle Eastern religious institutions, Meir Litvak analyses the social and political dynamics of these communities. Tracing the historical evolution of Shi’i leadership, he explores the determinants of social status amongst the ulama, the concept of patronage, the structure of learning, questions of ethnicity, and financial matters. He also assesses the role of the ulama as communal leaders who, in the face of a hostile Sunni government in Baghdad, were often obliged to adopt a more quietest political stance than their counterparts in Iran. This is an important book which sheds light on the formation of contemporary Shi’ism and the surrounding debates.

Acknowledgements
Note on transliteration
List of abbreviations
Map
Introduction
Part I. The Community: Learning and Leadership:
1. The community of learning: concept and organization
2. Leadership in the age of multiple centers
3. Monopolization of leadership in Najaf
4. Diffusion, centralization and politicization
5. Determinants of status and leadership
Part II. The ‘Ulama’ Between the Ottomans and Qajars:
6. The shrine cities, the Mamluks and Iran
7. The ‘ulama’ and the reassertion of direct Ottoman control
8. The ‘ulama’ and Ottoman centralization policy
9. The changing political triangle, 1875–1904
Conclusion
Appendix
Notes
Glossary
Bibliography
Index.

Title: Shi’i Scholars of Nineteenth-Century Iraq: The ‘Ulama’ of Najaf and Karbala’