Book: “Lessons in Islamic Jurisprudence” By: Muhammad Baqir Sadr, Translated and with an introduction by Roy Parviz Mottahedeh 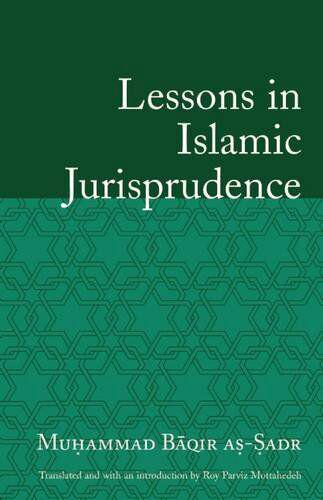 This is an English translation of one of the most famous texts by the influential and charismatic Islamic activist, Martyr Sadr, who was executed by Saddam Hussein in Iraq in 1980.

As-Sadr’s books have made him one of the most celebrated Muslim intellectuals of modern times.;This text is used throughout the Sunni and Shi’a world by students of Islamic jurisprudence because of its succinctness and intellectual vigor.

Mottahedeh’s translations accompanied by a detailed introduction which explains and places in on text as-Sadr’s views.;Representing an attempt to relate a large body of Islamic law to scripture, this translation should be of great interest to students of scripture, hermeneutics and law.

Produced in association with the Harvard Center for Middle Eastern Studies