The writer of the book, Ayatollah Mohsen Araki, has outlined in this book three basic stages for the ongoing awakening the Islamic world is witnessed.

The Islamic world had witnessed a number of changes from which it had emerged to fight, with firmness and clarity of purpose, for its existence. In this book, Ayatollah Mohsen Araki, discusses the features of this strategic change: whence the Islamic Umma (nation) had marched forward, led by its pioneers and renascent schools of thought, to finally achieve the dream of the prophets in establishing an Islamic state, right in the midst of all these challenges and adverse conditions. 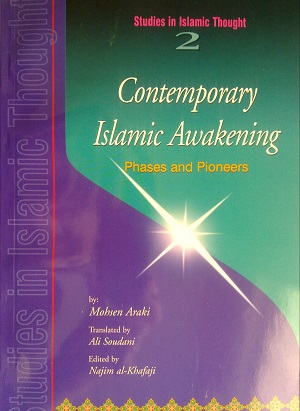 The authors has outlined three basic stages for the ongoing awakening the Islamic world is witnessed. He began with the efforts of Sayyed Jamaluddin Al-Asadabadi, well known as Al-Afghani, and his school of thought, in shedding lights on the dim situation and stirring the stagnation that prevailed then, and called this as the stage of “The Awakening”.

Ayatollah Araki then goes on to discuss the second stage of “The Intellectual Build-up of the Nation”. For this phase, the author has chosen Martyr Sayyed Mohammed Baqir as-Sadr, and paid tribute to other constructive contributions by other Islamic scholars in many a part of the Islamic countries. Then follows the third stage, of the Revolution and Establishment of the State, aimed at bringing up the Islamic ummah to the level of initiative-taking in all those confrontations. For this stage, the author has chose Imam Sayyed Rohullah al-Mosawi al-Khomeini as the founder of the Islamic state in modern times.