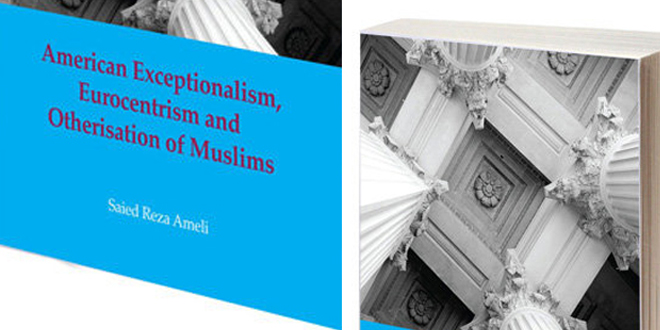 Professor Saied Reza Ameli’s scholarly book on “American Exceptionalism, Eurocentrism and Otherisation of Muslim” is an important examination of contemporary debates related to questions of Western oppression and liberation movements.

It dishes up nicely an understanding of the rise of global Islamophobia and the difficulties Muslims and others face today. His analysis gets at the roots of this and related contemporary problems, challenges and issues.

The book explains the various dimensions of the content of the first letter of the Supreme Leader of the Islamic Revolution, Ayatollah Ali Khamenei, to young people in Europe and the United States. The letter was published in early 2015, followed by the second letter published later that year. The second letter was a kind of condolence message to the people of France, in particular Parisians, who had suffered terrorist attacks by ISIS (so-called Daesh) in November of 2015. It also invited Western youth to understand the plight of oppressed Muslims in all corners of the world. Ayatollah Khamenei also wanted to draw the attention of the youth to the mass killings and the horrific wars that Western governments have perpetrated against Muslims. The two letters highlight the domination-seeking, hegemonic approaches of Europe and the U.S. towards others, particularly Muslims, and try to connect and redefine the intellectual aspects of the struggle to build relationships with the West and with the rest of the world in an attempt to prevent more war and the humiliation and oppression attendant to hostile military actions.

The content of the book is organized into 12 chapters. Dr. Ameli starts from basic and theoretical concepts like “critique” and then takes the theoretical framework of American Exceptionalism and Eurocentrism to perform an historical analysis of the West. It then presents key discussions on the roles otherisation, xenophobia and Islamophobia have in fostering hateful climates. The book also highlights the manifold failures of the West and discusses crucial issues such as representations and narratives that Orientalists present about Islam and Muslims, the civilizational view of Islam, and the present and immediate understanding of Islam and holy book, the Quran. Finally, it explores possible ways of reducing oppression, prejudice and faulty communications between different nations.

The second chapter analyses the conceptual and theoretical bases that originated in a domination-oriented view of Europe and the U.S. towards “others”, particularly those of the Islamic faith. This view holds that the so-called West has adopted an extraordinary presumption that it has a right to intervene in the affairs of other countries and, as we know, this has led to devastating wars, massacres, and, even, on occasion, the use of WMDs.

Prof. Ameli also points out to Islamophobia as an unwarranted panic in the West in recent decades. He analyzes different dimensions of the phobia including its conceptual and historical aspects, and examines the different discursive confrontations between the West and Islam, discrimination and Islamophobia in Europe, America, and how that plays out in the Western media especially. The book also cites some international and national examples of how Islamophobia is being challenged. This chapter concludes by revealing multiple manifestations  of Islamophobia which have often been aimed at constructing an “enemy”, and how the Western creation of a common foe has united parts of the West, enhanced the arms trade, helped collapse some Muslim countries internally, and more importantly, segregating predominately Islamic nations from the non-Islamic ones.

Another chapter offers a critical view of the relationship between the West, Islam and Muslims, and provides insights into the misunderstandings which affect both Islam and the West. Moreover, the role of the media in producing an “upside down reality” is further analyzed.

Prof. Ameli brings a fascinating reconstruction from Islamic sources of concepts of Justice and Ethics as well as Islam’s comprehensive contributions to different aspects of human life as solutions to the different problems currently facing humanity.

The book, in sum, is a major scholarly contribution within the corpus of previous literature published on these topics. It is a tour-de-force and a must  read to those interested in building a new and better world, a refreshed humanity and a fairer civilization beyond the present destructive exploitation and domination of Western interests and polities.

Saied Reza Ameli is professor of Communications and North American Studies, Dean of Faculty of World Studies at the University of Tehran. His writings cover various aspects of Islam, Muslim studies, globalization, global media, the Internet, intercultural and strategic studies.