Najaf has been the cradle of Shī῾ī learning for many centuries, according to Najaf tradition, it has been so ever since the prominent scholar Muḥammad b. al-Ḥasan al-Ṭūsī.

Najaf has been the cradle of Shī῾ī learning for many centuries. According to Najaf tradition, it has been so ever since the prominent scholar Muḥammad b. al-Ḥasan al-Ṭūsī, called shaykh al-tā’ifa or “senior scholar of the the sect”, migrated there shortly after the Saljuq conquest of Baghdad in 447/1055.

We have very little information about the teaching system and curriculum in Najaf before the nineteenth century. In this essay, I will try to present the basic elements of a Najaf ḥawza education as they exist in contemporary Iraq and compare it with a Najaf curriculum of 1913. Quite remarkably, the curriculum, teaching methods and patronage networks have been remarkably stable over the last century. Politics and reform movements have, however, had their effects on the curriculum too, as I shall explain in the course of this essay.

The contemporary curriculum given below is well described in an excellent book by ‘Abd al-Hadi al-Hakim published in 2007. Some preference may be shown to the curriculum of the Madrasa al-Hakim, as the author belongs to the family of the founder of this madrasa. Over twenty madrasas are part of al-Hawzah al-‘Ilmiyya at Najaf. (See Appendix C.)

The curriculum begins with the study of Arabic grammar. The Alfiyya by Ibn Malik who died in 672/1274, which usually gets memorised from intensive study, remains the primary text. The slightly easier Ajurroumiyya of the North African scholar Ibn Ajurroum (d. 723/1323), is also studied at Najaf (though seldom, if ever, used at Qum).

At the first level, al-muqaddamat, two rhetoric works of the great Eastern scholar al-Taftazani(d.793/1390), Mukhtasr al-Ma‘āni and his Mutawwal are occasionally used. One innovation in the curriculum is the addition of the very popular work on logic of Muhammad Rida al-Muzaffar (d. 1383/1964), commonly called al-Mantiq . Some go on to study commentaries on the long favoured traditional logic called al-Risala al-Shamsiyya by Najm al-Din ‘Ali al-Kātibi(d. 693 / 1276 ).

Previous A Review on the Book “The History of Islamic Legal Theory”
Next Book: Annotated Legal Documents on Islam in Europe: France 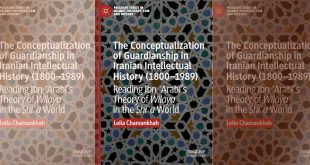