US Hijabi Prof to Leave College after Solidarity with Muslims

An American female professor at a Christian university who got in trouble after wearing the hijab and saying Muslims and Christians worship the same God will leave the school.

Wheaton College, located near Chicago, Illinois, and political science professor Larycia Hawkins have reached a confidential agreement in which they will “part ways,” the college said in a statement on Saturday night.

A joint statement said Hawkins and the college had “found a mutual place of resolution and reconciliation” and that the two sides “will part ways” after reaching a confidential agreement.

“Wheaton College sincerely appreciates Dr. Hawkins’ contributions to this institution over the last nine years,” the college’s president, Philip Graham Ryken, said in the statement. “We are grateful for her passionate teaching, scholarship, community service and mentorship of our students.”

Larycia Hawkins, a tenured political science professor at Wheaton College, had been scheduled for a disciplinary hearing in five days to determine whether she would be allowed to remain at Wheaton.

The controversy started on December 10, when Hawkins wrote on Facebook that she would wear an Islamic head scarf before Christmas to express solidarity with Muslims.

The post drew criticism amid a broader debate regarding the role and treatment of Muslims in the United States following the November mass shooting in San Bernardino, California, which US authorities have said was inspired by the ISIL terrorist group.

The college placed Hawkins on administrative leave as a result. Last month, the school’s provost recommended Hawkins be fired.

Many faculty members had expressed support for Hawkins. Bill Struthers, a Wheaton psychology professor, posted a photo on Facebook on Saturday night of himself holding a handwritten sign reading, “I support Larycia.” 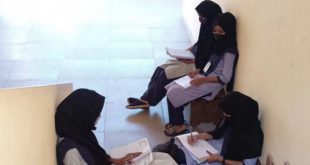 The Indian Muslim girls were not allowed to sit in the classroom because they were wearing Hijab, or headscarf....