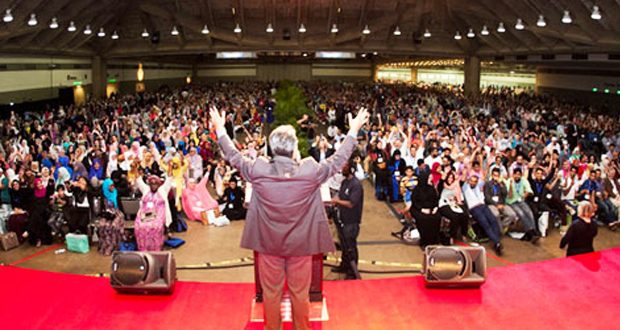 Thousands Gather at Largest Convention of US Muslims

An estimated 20,000 Muslims from across the US are in downtown Baltimore over the weekend for the Islamic Circle of North America’s annual Conference for Peace.

It is the 42nd annual convention for the group and the third straight year it has been held at the Baltimore Convention Center.

“We’re bringing like-minded people together to celebrate our religion and do good,” said Haris Qudsi, outreach coordinator for ICNA Relief, a charitable nonprofit arm of the organization.

Qudsi said Baltimore is an ideal location, given the active Muslim community in the DC-Maryland-Virginia region and the city’s easy accessibility from other states.

The group first held its convention in Baltimore in 2015 just after the unrest following the death of Freddie Gray, the 25-year-old who suffered fatal injuries while in police custody. Inspired by the protests, Qudsi said, the group created hundreds of “blessing bags” of basic necessities, including toothbrushes and soap, to give out in the community.

The group has repeated the effort each year since then. This year, it handed out more than 750 blessing bags to the homeless and distributed 1,000 hot meals of chicken, rice and vegetables in coordination with the Islamic Society of Baltimore and several interfaith groups.

“We’re about people coming together to help in times of need,” he said.

The opening message from the ICNA president, Javaid Siddiqi, read: “This year we are meeting in the midst of new political climate that has invigorated renewed interest of political and social activism within the American Muslim community.”

Several convention sessions, including “Combating Islamophobia,” “Asserting Your Rights Under Trump Presidency” and “Working through Challenging Times,” address concern spreading through the community given a spike in hate crimes against Muslims and the Trump administration’s moves to block refugees from Muslim-majority countries.

One session, called “#WelcomeRefugees,” included more than a dozen recently arrived refugees from Iraq and Syria, who spoke of their struggles in the months following their arrival in the US.

Most said they had understood from the United Nations that they would have one year of full assistance during which they could learn the language and get situated. But family after family spoke of their surprise when they found they would just have one month of full resources and then were told they needed to get a job and survive largely on their own during that second month and thereafter.

Hanaan Ismail, single mother to a 17-month-old girl, is a refugee from Iraq who attended the session. She said she was told she needed to have a job after one month, though she had yet to learn English or find affordable housing or day care. Ismail, 31, lives in Baltimore in an apartment that costs $925 per month, which she said was too expensive for her. She said religious groups have helped to fill the gap, but she is looking for more affordable housing and more time to get on her feet.

Samar Daas, 43, from Syria said he has resorted to looking in the garbage for furniture and other necessities for his family. He spent the one-time $1,850 stipend he and his wife received on rent. Daas, like other refugee families, collects food stamps, but said the amount has decreased over time.

Hala Halabi, director of refugee facilitation for ICNA Relief, said she hopes the conference will help facilitate aid for many of the refugees.

“My job is to make their life easier, ” Halabi said. “That’s why we invited them here, to see how we can help them.” She said her group will be looking for resources to help with rent, furniture, language classes and finding jobs.