Born
Hajj Shaikh Fazl-Allah Nouri was born in Lashak, a village in Kojur district of Mazanandaran, Iran on Ḏu’l-qaʿda 2, 1259/November 24, 1843.
Ḥājj shaikh Fażl-allāh Nouri a prominent jurist who campaigned in the Iran Constitutional Revolution of 1906-1909 for constitutionalism according to the shariʿa (canonical laws of Islam), and in its default, preferred absolutism to secularism.

Education
Shaikh Fażl-Allāh, son of the local cleric Mollā ʿAbbās Kojuri, received his early education in Kojur and Tehran, and then left at an early age for the Shiʿite shrine cities (ʿAtabāt) in Iraq. There he studied under the prominent Shiʿite theologian Mirzā Ḥasan Shirāzi .
In about 1300/1882-83, he returned to Tehran and gradually emerged as its leading scholar and jurist.
He lived primarily on his fees from his shariʿa duties, and many of the notables and merchants of Tehran, as well as lesser bazaaris and officials, referred their cases to him. He was also highly regarded as a teacher and held regular classes.
Like other theologians (mojtaheds), Shaikh Fażl-Allāh fulfilled his expected obligation of representing the grievances of the people to the government. In 1896, when there was a water shortage caused by a draught in the Zhāleh Maydān district of Tehran, Shaikh Fażl-Allāh represented the concerns of the local people over problems with access to water to the governor of Tehran.
He was also the author of many distinguished works on a range of subjects, including jurisprudence (feqh), oṣul, and philosophy.

Political Activities and Islamic Government
In the later 1880s, Shaikh Fażl-Allāh was drawn into politics, along with the other leading religious leaders (ulama) as a result of the Iran Shah’s policy of increasingly awarding concessions to foreign entrepreneurs, seen as selling the Shiʿite land of Iran to European foreigners.

He obtained the view of his mentor, Mirzā Ḥasan Shirāzi, on this policy in some of the questions in a book entitled Soʾāl va javāb. It went to many editions. In these questions he purportedly drew from Mirzā Ḥasan Shirāzi the important argument that in periods when government (dawlat) and leadership of the community (mellat) were fixed in one place, as in the time of the Prophet, they were the responsibility of one person.  However, nowadays these two duties were in separate hands but with a common responsibility, so that religion and the world of worshippers were protected at the time of the absence of the Imam of the Age. In effect, this argument, which perceived government as a joint responsibility of the ruler and the ulama, supported the active participation of the latter in political matters.
Thus Shaikh Fażl-Allāh, like his fellow clerics, played a part in the movement against the Tobacco Concession (monopoly over production, sale, and export of tobacco) granted by Nāṣer-al-Din Shah to the British Régie Company in 1309/1890-91. The movement resulted in the issuing of a fatwā by Mirzā Ḥasan Shirāzi banning tobacco smoking, and the cancellation of the Concession. Following the tobacco incident, Shaikh Fażl-Allāh was not particularly politically prominent.
In 1897, he was reported as leading a secluded life and being poor (compared to the other theologians and members of the Tehran elite) but much respected. However, he took some interest in the Pan-Islamic ideas current in Iran at the turn of the century, partly as a result of being received personally by the Ottoman ruler Sultan ʿAbd-al-Ḥamid on his way to Mecca on pilgrimage .
In 1902, along with a number of leading theologians, Shaikh Fażl-Allāh opposed the loan policies of the then grand vizier Mirzā ʿAli-Aṣḡar Khan Amin-al-Solṭān, which were considered to be selling the country to foreigners.  They collaborated with a faction led by his rival, ʿAbd-al-Majid Mirzā ʿAyn-al-Dawla (q.v.), to remove him from office, and wrote letters to the provinces and the ʿAtabāt. When ʿAyn-al-Dawla came to power in 1903, Shaikh Fażl-Allāh became his principle supporter amongst the ulama, in a policy of bringing in financial reform without making substantial changes to the political system. ʿAyn-al-Dawla, who was not on good terms with Sayyed ʿAbd-Allāh Behbahāni, the favored theologian of Amin-al-Solṭān, passed the government religious and public affairs to Shaikh Fażl-Allāh. As a result, Shaikh Fażl-Allāh benefited substantially both financially and in terms of influence.
In December 1905, given his connection to ʿAyn-al-Dawla, Shaikh Fażl-Allāh showed no enthusiasm for the campaign against the customs reforms, which changed into a demand for an ʿadālat-ḵāna (house of justice), and rebuffed the followers of Behbahāni when they tried to engage his support. 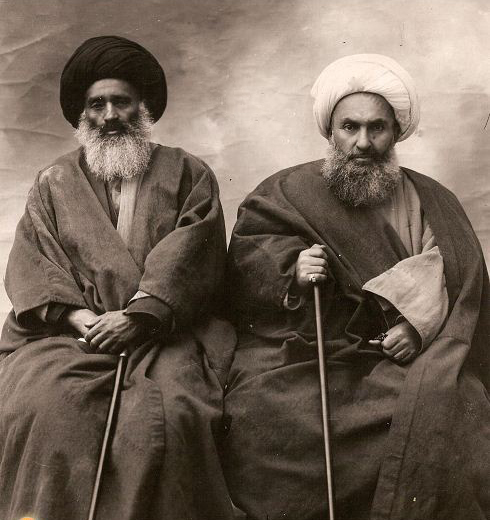 In Jomādā I 1324/July 1906, when the agitation for the creation of a house of justice and the removal of ʿAyn-al-Dawla became, in effect, a movement to change the political system, Shaikh Fażl-Allāh delayed for three days his departure to join the other leading ulama who had taken asylum (bast) in the shrine of Qom. Finally, probably realizing that he would lose influence and prestige if he remained, he left on the 18 July (26 Jomādā I), accompanied by a large following, and much weakening the position of ʿAyn-al-Dawl. Once in Qom, Shaikh Fażl-Allāh, like the other ulama, assisted in defraying the expenses of the bast, and reportedly bore a higher cost since he had the largest personal following. Thereafter, he acquiesced to the demand not only for reform but also for the establishment of a majles, but on the understanding, like most of the ulama, that it was to be an Islamic institution.
He cooperated with Sayyed ʿAbd-Allāh Behbahāni and Sayyed Moḥammad Ṭabāṭabāʾi, and they were all agreed that a majles should protect Islam, particularly Shiʿism in Iran, from foreign domination. Shaikh Fażl-Allāh believed at this point that mashruṭa had significant implications for limiting the power of the shah and his ministers, but he was concerned about demands for full freedom, which he considered infidelity in Islam. He was also unhappy about references to a boundary in legal affairs, stating that there was no boundary for the shariʿa. By January1907, he considered what he termed as “a national consultative assembly and a place for the implementation of Islamic justice” as beneficial to the people of Iran, and a result of the struggle of the ulama for their protection and strengthening. 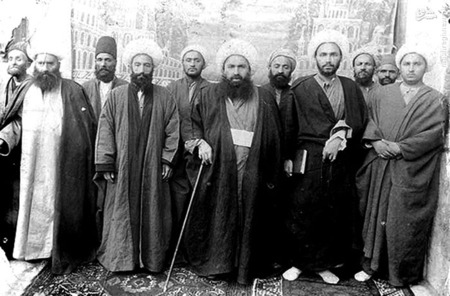 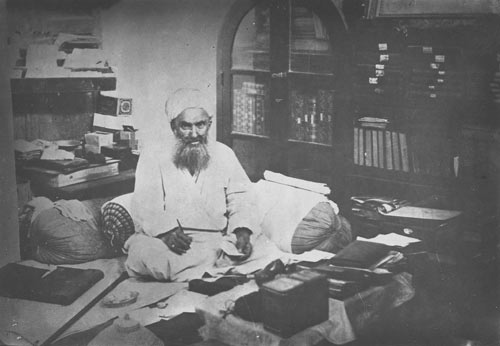 In the treatise Taḏkerat al-ḡāfel wa ershād al-jāhel, which represented his arguments, he said that in practice there was a division between the affairs of government and those of the religion, by which he made clear that he had no objection to the ʿorf law as such. However, the problem with the Majles was that it did not accept this division, and thus was attempting to enforce its legislation in matters related only to the shariʿa.  In particular, he stated that velāyat (government) in absence of the Imam of the Age (Emām-e ʿaṣr) devolved on the ulama, and he attacked the concept of the authority of the majority vote, and its representation as a valid source of authority in Imami Shiʿite law. Above all, Shaikh Fażl-Allāh objected to the concept of equality, meaning non-Muslims would be equal with Muslims. He pointed out that, under constitutionalism, Muslims would lose their advantageous status under the shariʿa, and, on the other hand, adherents of other religions would gain a voice in the affairs of the religion. He used the five qualifications of Islam (aḥkām al-ḵamsa: vājeb, mandub, mobāḥ, makruh, ḥarām [obligatory, recommended, indifferent, reprehensible, forbidden], to argue that constitutionalism was reprehensible, as it made laws (which it was obligatory to obey) on matters that the Prophet had designated as permissible. In effect, he implied that constitutionalism undermined the religious and moral purpose of Islam.
Shaikh Fażl-Allāh’s arguments were strongly contested by the pro-constitutionalist ulama of Najaf, in particular Mirzā Moḥammad-Ḥosayn Nāʾini representing the views of Āḵund Mollā Moḥammad-Kāẓem. They argued that in Shiʿism the only rightful government was that of the Imam of the Age, but in his absence constitutionalism was the least unjust alternative, much preferable to absolutism. Furthermore, Ḵorāsāni believed that constitutionalism was the best means of protecting Shiʿi Islam, the religion of Iran, from untrammeled absolutism. Government by the representatives of the people was Ḵorāsāni’s preferred choice; but the laws should be written under the supervision of the theologians (mojtahed), whose duty was to ensure justice at the time of the absence of the Imam of the Age, a principle enshrined in Article 2 of the Supplementary Fundamental Law. This, of course, was Shaikh Fażl-Allāh’s argument, except that he understood, while Ḵorāsāni and Nāʾini did not, the secular implications of the theologians being chosen by the Majles, which would lead to the encroachment of the Majles on the authority of the Deputies of the Imam in the general affairs (omur-e ʿāmma). In other words it crossed the boundary between the ʿorf law and the shariʿa.  Ḵorāsāni later also used against Shaikh Fażl-Allāh the argument that constitutionalism was the best and most just form of government, not only because it respected the shariʿa, but also was based on the mass of Muslims.
As the constitutionalist forces approached Tehran in July 1909 (Jomādā II 1327), there was still some support for the shah in Tehran, especially in the Sangalaj quarter, and Shaikh Fażl-Allāh wrote to the prime minister to obtain arms from the shah to resist them. After Moḥammad-ʿAli Shah abdicated in July 1909, he took refuge in the Russian Legation, but Shaikh Fażl-Allāh, declined the offer of taking refuge in an embassy, unlike other supporters of the shah.

Martyrdom
Finally, Sheikh Fazlullah was arrested on 31 July 1909 (13 Rajab 1327) and after 3 days of sham trial he was sentenced to death by a verdict from a deviated fake clergy. At the threshold of being hanged, he received a message that he would be rescued if he confirmed such kind of constitution. He responded, “I dreamed Prophet Muhammad last night who invited me to his feast for tonight. I never sign and confirm such a thing.” The late Jalal Al-e-Ahmad writes in his On the Services and Treasons of Intellectuals, “The hanged corpse of that honorable man is for me akin to the flag of domination of occidentosis raised above the country after 200 years of struggle.” He was to be remembered as a martyr for the cause of Islam by the Islamic Republic.