Ramadan Daylight Hours around the world

How Long The Ramadan Fast Lasts For Muslims Around The World

Ramadan (a lunar month) is a holy month, a time for introspection and spiritual renewal for Muslims around the world.

But some have it harder than others.

Muslims observing the fast rise before dawn for the Fajr prayer. After partaking in the Suhur meal, they won’t be able to eat or drink anything  or even smoke until  a while  after the sun has set (Maghrib prayer). When the time for the Maghrib prayer comes, Muslims can break the fast with a sweet, tasty date and a celebratory meal called an Iftar.

Depending on where you are in the world, fasting times can vary quite significantly. Muslims in places like Iceland, where daylight is scheduled to last 22 hours in June, face the dilemma of figuring out how to stay healthy and nourished while observing their faith.

HuffPost Religion calculated the time between the Fajr and Maghrib prayers to find out how long the fast lasts for Muslims around the world. 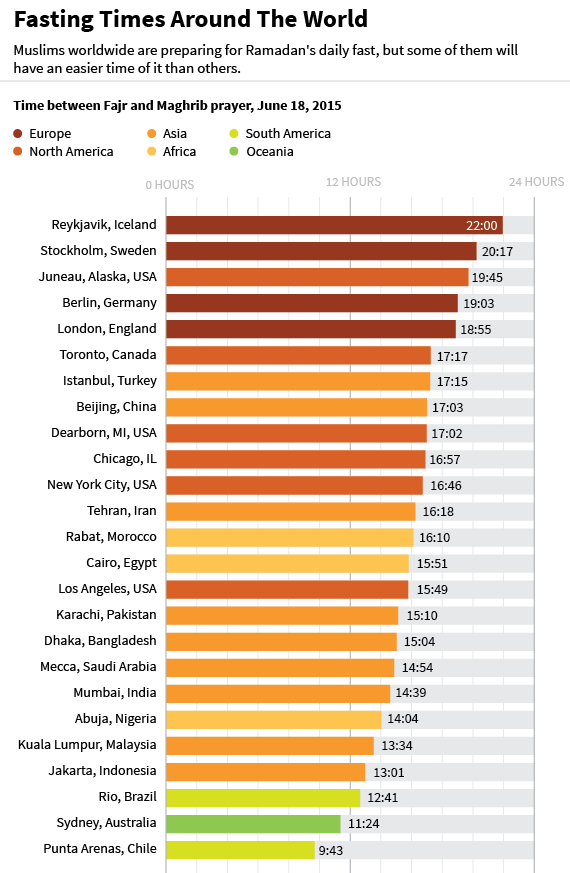 There are nine acts which invalidate fast:

5.Ascribing false things to Almighty Allah, or his Prophet or to the successors of the Holy Prophet

8.Remaining in Janabat or Haidh or Nifas till the Adhan for Fajr prayers