Breaking News
Home / All / Occasions on which it is Obligatory to Observe the Qada, Fidya or Kaffara

Occasions on which it is Obligatory to Observe the Qada, Fidya or Kaffara

Fasting means that a person must, in order to do homage to Allah, from the time of Adan for Fajr prayer up to Maghrib, avoid nine things which will be mentioned later. In some situations Qada or Kaffara or Both of them become obligatory. 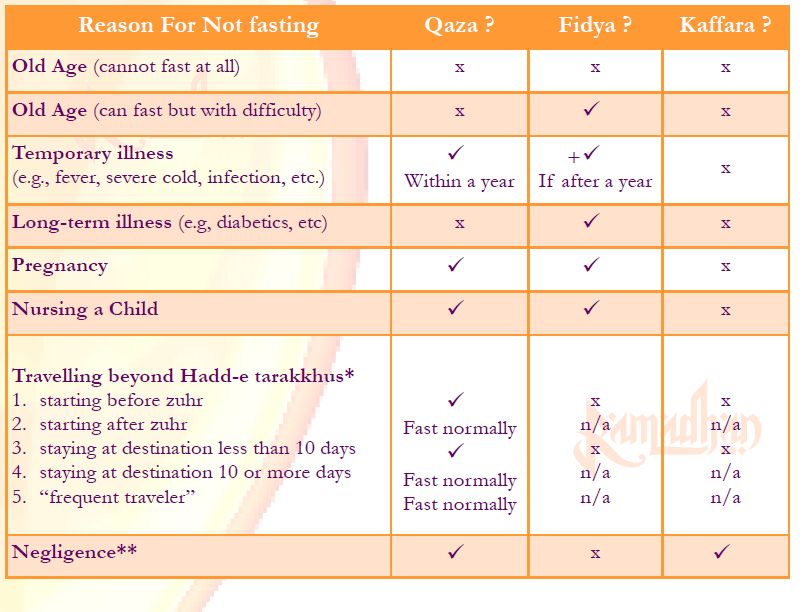 Fidya (compensation): 750 grams rice or flour per day for the poor. It is better to give 1.5 kg.
Kaffarah (fine): 750gr. rice or flour for 60 poor people per day. That makes it 45kg per day. Note: Fidya and kaffarah has to be paid to the poor and needy in kind, not cash.
* “Hadd-e tarakkhus” means the distance from which a person is considered a traveler: in a one way journey, it would be at 44 km from the city and in case of a round trip, it would be at 22 km from the city.
** “Negligence” means knowingly not fulfilling the obligation. However, if the fasts were missed in early years of bulugh because of ignorance, then the person is exempted from kaffarah but he/she still has to do the qada.

Brief History of the Prophet (s) and His Daughter Fatima (a), the Confluence of two Lights