Breaking News
Home / All / Imam Khomeini Was a True Follower of the Prophet Muhammad: Ishmail Duwa

The most distinguishing feature of Imam Khomeini was that he was a true follower of our Prophet Muhammad (PBUH) because in all his actions, he was guided by the Quran and the Sunnah of the Prophet Muhammad (PBUH), Said Ishmail. A. Duwa, the President of Supreme Council of Islamic Affairs in Zimbabwe in an interview with Ijtihadnet.

Ayatollah Sayyid Ruhullah Musawi Khomeini, also called Imam Khomeini, was the founder of the Islamic Republic of Iran and the leader of the 1979 Iranian Revolution. He was born in Jumada II 20, 1320 (September 24, 1902) in Khomein, a city located in central Iran.He studied preliminary level of Islamic studies -including Arabic morphology and syntax, mantiq (logic), basic level of fiqh (jurisprudence) and usul (principles of jurisprudence) under the teachers and scholars of his hometown, Khomein. In 1338/1919, he went to Islamic Seminary of Arak. Shortly after his teacher, Shaykh Abd al-Karim Ha’iri Yazdi, emigrated to Qom, he also moved to Qom along with a number of his classmates.In the Islamic Seminary of Qom, in addition to completing the preliminary and advanced levels in fiqh and usul, he worked on other fields of Islamic study, including prosody, mathematics, astronomy, and Islamic philosophy. He also studied advanced levels of theoretical and practical mysticism under Ayatollah Muhammad Ali Shahabadi for six years.The founder of the seminary of Qom, Ayatollah Shaykh Abd al-Karim Ha’iri Yazdi, was his most important teacher in the advanced levels of fiqh and usul. After the demise of Ayatollah Ha’iri Yazdi, by the effort of Imam Khomeini and other mujtahids from Qom, Ayatollah Burujirdi, who later moved to Qom, was chosen as the head of the Seminary of Qom. In this period, Imam Khomeini was known as one of the greatest mujtahids and teachers in fiqh, usul, philosophy, mysticism, and ethics. Imam Khomeini spent a lot of years teaching fiqh, usul, Islamic philosophy, mysticism and Islamic ethics in the Islamic Seminary of Qom.In Najaf, he taught Islamic subjects including advanced levels of fiqh for almost 13 years.He was arrested twice by the monarchical Pahlavi government and was exiled from Iran. For a while, he lived in Turkey, then he moved to Najaf. He stayed in Najaf for 13 years teaching, writing and leading the revolutionists in Iran. In 1979, he was forced to leave Iraq; so he went to Paris. After a while, he returned to Iran and led the Islamic Revolution to victory and overthrew the monarchy and established the Islamic Republic in Iran. Imam Khomeini’s movement and the victory of the Islamic Revolution had several impacts on the world and led to establishment of political movements based on Islamic thoughts. The doctrine of Wilayat al-Faqih (guardianship of the jurist), a political doctrine based on Shi’a beliefs, is his most important doctrine. He tried to establish the Islamic Republic of Iran and its constitution based on this doctrine. From his point of view, governing was the practical realization of all fiqh. Having this viewpoint about fiqh, he believed in innovation in Ijtihad beside emphasizing on keeping the frames of traditional fiqh. His doctrine about the impact of the time and place on ijtihad and some of his influential fatwas can be counted as results of this point of view.Finally, In the evening of Shawwal 28, 1409/June 3, 1989 he passed away from cancer in Shahid Raja’i Heart Hospital in Tehran. His funeral was held on Dhu l-Qa’da 1, 1409/June 5, 1989 in the Grand Musalla of Tehran. Ayatollah Sayyid Muhammad Rida Gulpaygani performed funeral prayer on his body. He was buried in Bihisht Zahra (a cemetery in outskirts of Tehran) on Dhu l-Qa’da 2/June 6 in presence of 10 million people who came form various cities of Iran for mourning. His funeral is counted as the most crowded one in the history.Muslims, especially Shi’as, liked him very much. During his life, he lived a plain and ascetic life. In the last 10 years of his life, when he was the supreme leader of the Islamic Republic of Iran, he lived in a humble house located in Jamaran (a district of Tehran.)

The role of Imam Khomeini in awakening all humanity in general and the Muslims all across the world is undeniable. Many well-known personalities and movements have considered him their role model in their anti-Imperialist activities. Ishmail. A. Duwa, the President of Supreme Council of Islamic Affairs in Zimbabwe is one such figure. He was born in 1954 and is currently studying British Dutch Law Degree and masters English, Shona, Chewa and Swahili languages. He is also the Chairman in Southern Africa Interfaith Committee, the Chairman of Southern Africa Intersects (Mazahib), 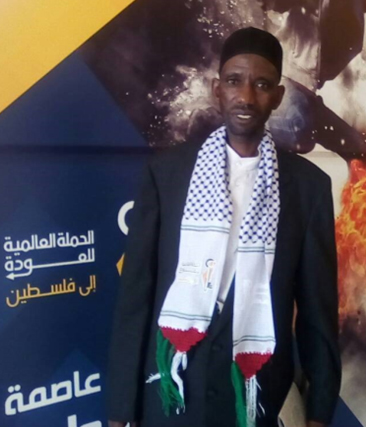 a member of Clean-up Campaign National Committee in President’s office, the Chairman of Child Protection Committee in Zimbabwe and the Chairman of Crime Consultative Committee in Zimbabwe. His other work experiences include Zimbabwe Phosphate Industries (IDC), Group Marketing Manager (17 years), Air Zimbabwe, Operations Manager (5 years) and he is currently working on voluntary humanitarian work. Ijtihadnet has interviewed him to inquire his ideas about Imam Khomeini.

I heard about Imam Khomeini in 1979 when the news of his return back to Iran from exile was released and shook the whole World. I knew about Imam Khomeini when Iran embassy was opened in Harare, Zimbabwe. I was one of the first people who visited the embassy cultural section library and obtained books including Imam Khomeini’s books and also knew him through media.

I believe Imam Khomeini was a religious leader whose political career was guided by Islamic principles and Sharia.

Back in 1979, Imam Khomeini and Islamic revolution of Iran was reflected in Zimbabwe through the programs which were done by Iran’s embassy through its cultural section.In various functions, Zimbabwean people and media were invited who in return publicised what was presented by Imam Khomeini. The attitude of Zimbabwean people and authority were very impressive with Iran’s events because it was similar with Zimbabwean situation who also attained independence in 1980 from British colony.

Indeed, Imam Khomeini played a great role in awakening people in different countries all across the world by supporting the oppressed and under privileged people. He indeed stood for the oppressed people and that is why all free people liked him and his approach of tackling the oppressors which were USA and its allies.

There are various similarities between the Islamic Revolution of Iran and the Revolution in Zimbabwe. In both revolutions, we see different types of oppression and aggression by the ruling oppressors backed by the Western countries. Consequently, both countries suffered and continue to suffer unjustified sanctions.

One of the main reasons is that through Imam Khomeini’s activities and the establishment of the Islamic Republic of Iran, the so-called super-powers were blocked from their barbaric actions as they wanted to affect the under-privileged countries by stealing of their resources.The other reason is their failure to defeat Iran when they attacked Iran through Ba‘th Regime of Iraq which was helped by thirty-two countries that supported Saddam in all ways possible and allowed him to go as far as using chemical weapons.

I read and am still reading books wrote by Imam Khomeini. His books are very educative giving guidance to the world’s oppressed people.I also met Imam Khomeini personally when I went to Iran for the Friday Prayer Conference.

Yes, Imam Khomeini was introduced properly in Zimbabwe by Iran embassy through their cultural section.Even up to now, functions are held commemorating Imam Khomeini’s birthday, life history and his demise. May his soul rest in peace and may the people of Iran and the entire world implement Imam Khomeini’s teachings concerning Islamic lifestyle and politics.

This interview was conducted by Sayyid Mostafa Daryabari and Dr. Morteza Karimi.

Previous Desecrating the Signs of Allah: Jannat al-Baqi Tragedy
Next Ayatollah Sistani Stood Up as a Sign of Respect to Imam Khomeini