Breaking News
Home / All / Fiqh & Socitey / How to Avoid Shaking Hands with a Non-Mahram?

How to Avoid Shaking Hands with a Non-Mahram?

The Islamic view is very clear when it comes to having any sort of physical contact (particularly skin to skin) between the opposite genders. For most practicing Muslims, avoiding physical contact with a namahram may not be super hard, however what does get to many is the dreadful handshake.

In the Western society, this is a norm and often times an expectation, yet Islam’s take on it is that one is not to shake the hands of the opposite gender. How can one avoid shaking hands of a member of the opposite gender when the situation arises? Unfortunately, there is no set-in-stone answer. Each scenario may require the individual to improvise on the spot or just be ready with solid reasoning in order to avoid the apparently negative reactions one may get after that.

To start off, we have numerous narrations on this issue though one shall suffice for this post.

And from a number of our companions from Ahmad b. Muhammad from `Uthman b. `Isa from Sama`a b. Mihran.  He said: I asked Abu `Abdillah about the shaking of the hands of a man and a woman.  He said: It is not allowed for the man to shake the hand of the woman except the woman whom he is forbidden to marry, a sister or a daughter or a paternal aunt or a maternal aunt or the daughter of a sister (niece) or like it.  And as to the woman whom it is allowed for him to marry, then he does not shake her hand except from behind the garment and he is not to press her palm. [Source #25446]

What do we do at a job interview as a male, where chances are that the person interviewing you will be most likely female? What do we do when we have our first day at work and get introduced to all the employees? It may not even be at a work place – what do we do at universities, schools, company events, industry trade shows, networking events or even at the bank (happened to me!)? Coming from a marketing background, I have had my fair share of handshaking situations arising. Here are a few suggestions that have worked for me and others that may help you as well:

Decline the Handshake – Straight Up

The best suggestion I can give you is that you simply decline. I found that in university and in high school, if this situation arose, there was a lot less at stake. Meaning, this wasn’t an issue that would have caused any hardship, such as losing a job or getting lower marks. Placing your hands on your chest – waiting for the awkward look on the opposite gender’s face – and then kindly explaining them your behaviour would get the point across and that would really be the end of it. If it wasn’t the end of it, then this is also one of the situations where you may have an opportunity to actually explain why you are refusing the handshake. You’d be surprised to know that some individuals will actually highly respect you for your actions.

During my university’s convocation ceremony, there was a whole line of individuals one had to shake hands with and while I was around #400 on the list of students, I kept analyzing the situation as I saw each student before me go one by one. As my turn came, I only kept telling myself that 5 seconds of selling my nafs to the Shaytan will not be worth the lifetime of guilt I’ll have to live with. As I walked across, I simply put my hands on my chest, smiled and walked swiftly to the next person in line. Though it looked very odd as I shook hands with one person and then put my hands on my chest for the other (the line-up was 1 male, 1 female, 1 male, 1 female), it really was only a matter of few seconds and then the ordeal was over. If you really can’t decline a handshake for whatever reason, the only other practical option is wearing gloves. This works particularly for females (because for some reason it’s less awkward to see them with gloves inside a convocation hall than a male). I have seen a female sister wear gloves during her convocation ceremony and she had no issues with it. What one has to realize is that the time-period that all this takes place within is so short that it will be over before you even know it.

The purpose here is to avoid sinning by shaking hands with the opposite gender. What has worked for many is that they simply say that they are sick so their hands may be contagious – therefore they refuse to shake the hands of another person portraying to be looking out for their health. However, to make sure that this method is actually legitimate (meaning that you aren’t lying if you aren’t truly sick), actually cough a few times beforehand while covering your mouth. This way technically speaking, you will not be lying because you did cough and do therefore have some germs on your hands. This method, where you aren’t actually lying, but yet are also concealing the real reason (for shaking their hand) is called Toriya.

Sometimes the situation creeps up on you so fast that you barely have time to think. Be a little creative and improvise. Once at an industry trade show, I was with a Catholic friend from work and we came across a past female employee who used to work with us. As she approached to hug my friend, I knew where she would be heading next. I quickly turned around slightly and started “checking out” one of the stalls that was there. Totally ignoring the situation at the time, as my friend carried on a conversation with her. Perhaps it was only a half a minute or so later that I turned around and casually faded myself into the discussion – at which point it seemed as if I was always part of the conversation and nothing odd had even happened.

Another thing you could do is grab something in your hands – papers, books, anything really to show that it will not be convenient for you to shake hands.

Keep a beard (if you don’t have one already), perhaps wear an Islamic cap and tho be if and where practical. I have noticed that just looking & behaving like a Muslim has prevented such awkward situations from arising. This is not just true for a handshake, but also helps in general in regards to how others perceive and treat you.

Despite the few tried and tested methods available, no one is saying that refusing a handshake is just as easy as talking about it. It is a lot easier said than done. Some might just slip during that last moment and give in; doing sincere tawbah is the next step in that case. If you aren’t used to this already, it may take a few successful attempt before one starts feeling comfortable with this decision. Having a strong understanding of the reasons why we refuse to shake hands with a namahram will also help you combat any subsequent remarks and make you feel less nervous. On the contrary, many thoughts still come into our minds and we try to determine ways through which we can find loopholes in fiqh and justify sinning. A rather detailed question was sent in to the offices of the maraja by a member of Shia Chat who explained some of the concerns and justifications that an average Muslim might have. I myself at times thought that this situation perhaps could be categorized under dissimulation, and this brother fortunately made mention of that in his question. The answers however, were pretty straightforward.

While I understand that shaking hands with the opposite sex is not allowed in our religion (fiqh), the Muslims living in non-Muslim countries (as minorities) sometimes confront difficult situations. For example, if they have an interview, the employer (of opposite sex) may greet them by extending hands (shake) which is seen as a normal & a civil response in that society. A practicing Muslim sometimes faces a dillema in such a situation because there are two types of responses which are equally valid in terms of mannerism and code of conduct as per Islamic teachings. First (and the best) option for a Muslim is to humbly apologise to the employer for not extending hands in return and try to explain the reason (which is his/her religious belief). This practice is no doubt worth praise because one is giving preference to his/her religious beliefs over the materialistic life. However it is easier said than done and sometimes one cannot chose the first option. Instead, one has to select the second option which is to understand the intention & motive of the employer behind the act (of shaking hands) – which by the way is to only welcome someone in a professional manner – and thus extend hands in response (with the intention of practicing taqiyah) so that one is not seen as an unreasonable and ill-mannered person and that one is not disadvantaged (in the interview process) for openly expressing his/her religious beliefs (something which is not liked in the corporate world in the West). Can you advise whether the second option is acceptable in Islam in certain extenuating circumstances and under taqiyah?

Since Islam is a religion of Justice and since it also focuses on the intentions of human beings, is it possible for us to sometimes practice an un-orthodox act for the purpose of survival in the society we live in?

Office of Ayatollah Khamenei and Hakeem: What follows are some photos of Muslims who reject shaking hands with non-mahram: 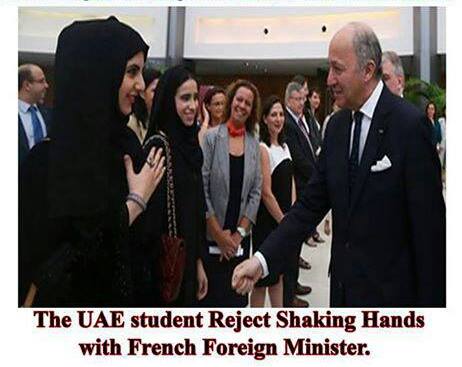 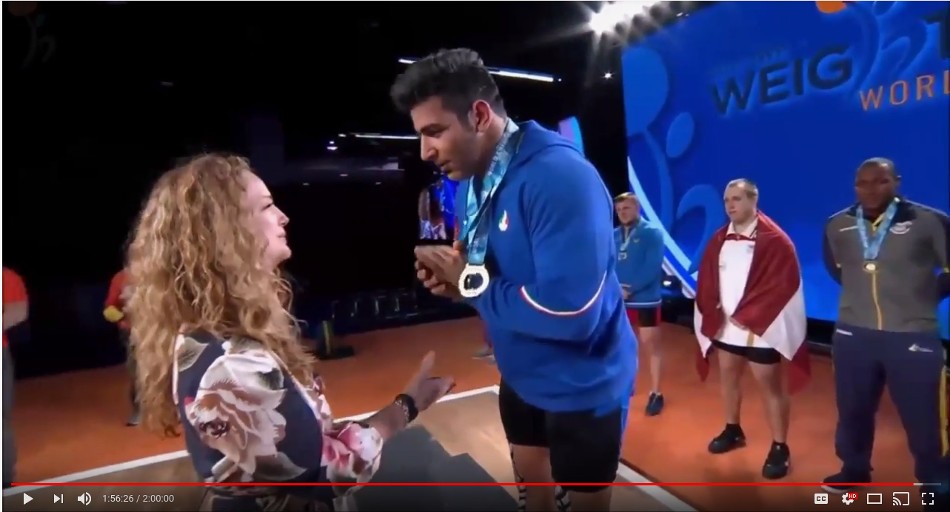 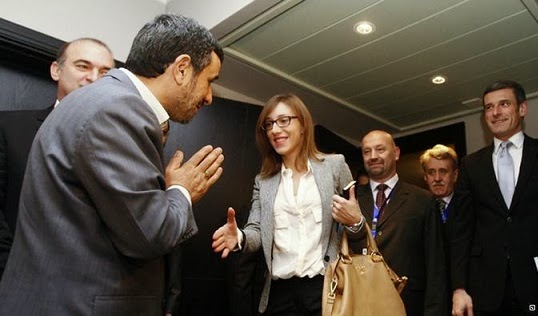 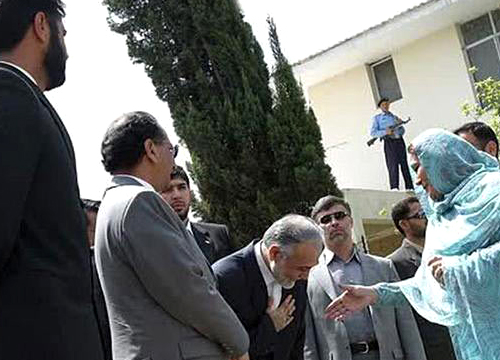 The article was written by Ali Imran. He is currently pursuing a MA in Islamic Studies from The Islamic College of London, and as well as continuing my studies in a seminary in Qom, Iran.