Home / All / Fiqh & Socitey / End of ISIS: a Tremendous Axis of Resistance Victory is Unfolding 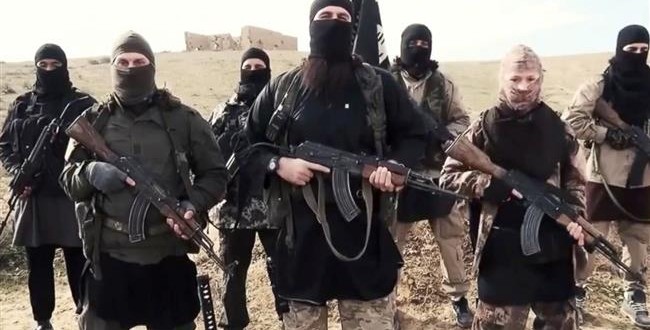 End of ISIS: a Tremendous Axis of Resistance Victory is Unfolding

When General Qassem Soleimani presented the victory letter to his leader, Ayatollah Khamenei, announcing the end of DAESH rule in the region, it was not simply a message from an Iranian General to his Commander in Chief.

For four long years, Syria bravely held off internationalized terrorist hordes, ideological clones of al-Saud, with their only direct help from Hezbollah, plus logistic support from Russia and Iran. However, it took more direct engagement by Russia and Iran to turn the tide of that defensive war and convincingly defeat the proxy armies of Washington, Tel Aviv and Riyadh.

When General Qassem Soleimani presented the victory letter to his leader, Ayatollah Khamenei, announcing the end of DAESH rule in the region, it was not simply a message from an Iranian General to his Commander in Chief.

This was the message of a regional resistance leader, a key strategist, who had fought the enemy from Saddam Hussein’s assaults on Iran, through defense of south Lebanon from Israel’s incursions, to defeats of al-Nusra in the towns of the Qalamoun, to the liberations of Aleppo and Tikrit, and the series of victories over DAESH (ISIS), culminating in those at Deir Ezzor and al-Bukamal.

General Soleimani’s personal supervision of operations across four allied countries shows why the Islamic Republic of Iran is so feared by both Tel Aviv and Washington. Yet breaking the destructive influence of Israel and the US in the region necessarily means a greater responsibility for Iran. Without a cohesive alliance, the region will again come under attack, to be once again divided and pillaged. Strong regional leadership is essential; and only Iran is capable of providing it.

The IRGC Quds Force leader wrote:
“Six years ago a dangerous plot … covered the Islamic world like a devastating storm … [but] the resistance of the Iraqi and Syrian governments and the perseverance of the armies and young men of these two countries … played an important role in overturning this dangerous event … [I can announce] the termination of the rule of this vicious cursed entity, following the liberation operation of Abu Kamal, as the last fort of ISIS, bringing down the flag of this US-Zionist made terrorist group and raising the flag of Syria.”

Credit for this tremendous achievement lies in the bravery and sacrifice of the soldiers of the Syrian Arab Army and its allies, the Russian pilots, sappers and special forces, the Hezbollah-led Lebanese resistance and Iraq’s army and its popular mobilization forces: Hashd al Shaabi. All victories were paid for in the blood of the many, mostly young people who defended their nations.

But it was the coordination and combined power of this alliance that imposed itself on the region. When, in his humble way, General Soleimani told Iran’s leader that DAESH had been defeated, he was also telling the world that the Axis of Resistance had prevailed. It was not that all terrorism had been eliminated, but rather that all the major bases of the enemy had been taken by the Regional Resistance.

And where would the region be without that Resistance? Lebanon, a state set up to fail, would have disintegrated many years ago. The invited intervention of Syria in the 1970s prevented that disintegration, followed by the rise of an indigenous resistance movement. That movement, led by Hezbollah and aided by Iran, saved Lebanon, while holding off the Zionist colonizers.

For four long years, Syria bravely held off internationalized terrorist hordes, ideological clones of al-Saud, with their only direct help from Hezbollah, plus logistic support from Russia and Iran. However, it took more direct engagement by Russia and Iran to turn the tide of that defensive war and convincingly defeat the proxy armies of Washington, Tel Aviv and Riyadh.

In Iraq – where DAESH was created more than a decade ago, precisely to weaken Baghdad and prevent its constructive relationship with Tehran – the American ‘liberators’ once against betrayed the country. In 2014, Washington withheld the F-16 fighter planes purchased by Prime Minister al Maliki, just as DAESH overwhelmed Mosul. It took another indigenous resistance movement, Hashd al Shaabi, to rise and vindicate Iraq as a nation.

Now the enemy smears both Hezbollah and Hashd al Shaabi, with lies that they are extreme sectarians who do not care about their own people. Coming from the sponsors of al Qaeda, al Nusra and DAESH, that is hard to stomach.

It is true that important resistance initiatives have come from the Shi’a communities of Lebanon and Iraq. There are historical reasons for this, to do with histories of oppression, martyrdom and resistance. However, those same histories, of an alliance of the downtrodden (the mustadafin) have helped engage those communities with their neighbors. Mature leadership in both resistance communities has succeeded in building wider alliances.

The sectarian accusation, particularly from western and Zionist sources, has much to do with the frustration of their ‘divide and rule’ strategies, as also their dismay in seeing a revival of political will amongst their opponents. Nevertheless, sectarian accusations can never explain Iranian support for pluralist Syria and Sunni Muslim Palestine; nor the Hezbollah-Christian alliance in Lebanon; nor the powerful Shia-Sunni alliance within Hashd al Shaabi.

The fact is that a tremendous Axis of Resistance victory is unfolding, one that confounds the colonial powers. Despite the investment in huge, sectarian mercenary armies, the prosecution of a crippling economic war and a seemingly endless propaganda war, Washington’s plan to dismember and cripple the region is failing.

The article was written by Professor Tim Anderson. He is a distinguished author and senior lecturer of political economy at the University of Sydney, Australia. Author of the ‘The Dirty War on Syria’, he has been largely published on various issues particularly the Syrian crisis.