This arena is an arena of real war and the clergy should enter the arena of confronting falsehoods and wrong and deviant thoughts in a prepared and well-equipped manner, said Ayatollah Khamenei in a meeting with Tehran clerics.

Ayatollah Khamenei, the Supreme Leader of the Islamic Revolution, met Saturday morning with a number of managers, teachers and clergy of Tehran Islamic seminaries. Speaking at the meeting, His Eminence stated that ideological, religious and political guidance, increasing insight, counsel and presence in the arena of social services are three main responsibilities of the clergy, reiterating: “In today’s different world, the clergy should prepare themselves for undertaking determining responsibilities by acquiring the necessary qualifications and understanding.”

Advising the clergy to appreciate the value of clerical values and responsibilities, the Supreme Leader of the Islamic Revolution said: “If all necessary qualifications and specialties exist in society in the best way possible but society is not a religious one, the people in that society will suffer a great loss and face serious problems both in this world and in the hereafter and this great responsibility – turning society into a religious society – falls on ulama, seminarian personalities and the clergy.” 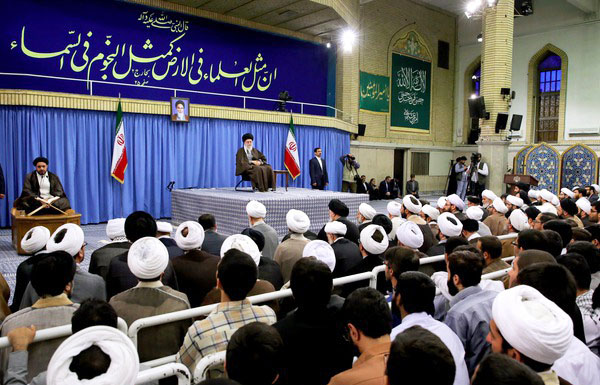 Defining religious guidance as an explanation about original Islamic teachings, Ayatollah Khamenei referred to the impact of the virtual world on an increase in religious falsehoods and the existence of political motives to inject deviant and wrong thoughts into the minds of the youth, further stating: “This arena is an arena of real war and the clergy should enter the arena of confronting falsehoods and wrong and deviant thoughts in a prepared and well-equipped manner.”

His Eminence described reactionary and biased Islam – one that does not understand spiritual truths and that suffers from inflexibility on the surface – as a real manifestation of deviant thoughts, adding: “On the other edge of these scissors, eclectic and American Islam is busy confronting original Islam.”

He mentioned that understanding original Islam – one that is reliant on the Book and Sunnah – with the tool of Islamic wisdom and thinking is an important responsibility of the clergy: “The path of prophets is to promote this original thought and the clergy are the continuers of this felicitous path which is the religious guidance of people.” 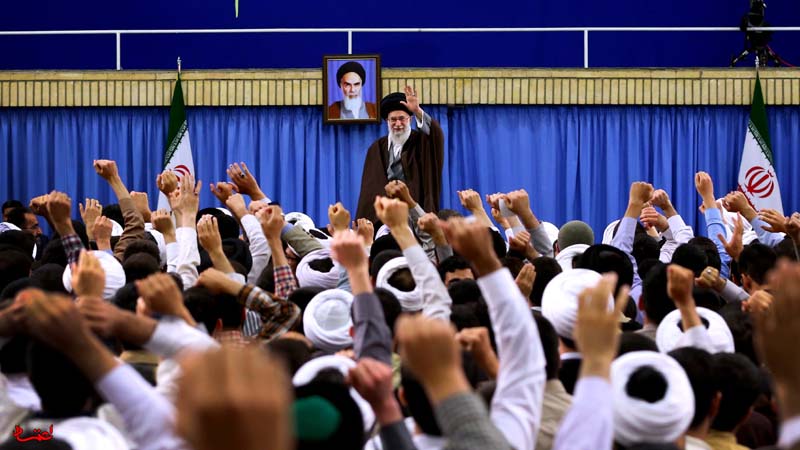 His Eminence described practical guidance of people as a complement to intellectual guidance, saying: “With the best methods, you should guide people to worship God and to observe religious obligations and responsibilities such as behaving in an honest manner, being trustworthy, showing piety, abandoning evil deeds, counseling to do good and adopting a proper lifestyle.”

His Eminence referred to political guidance as another important responsibility of ulama and the clergy, saying: “The reason why there is great emphasis on the necessity for Islamic seminaries to be revolutionary is that the continuation of the proper and revolutionary movement of the country and of society is not possible without the continuous presence of the clergy.”

The Supreme Leader said: “From the beginning of the Revolution, the Americans have been trying to eliminate the clergy from the popular movement of the Iranian people – as is the case in the present time – so that at the next stage, the people’s presence on the scene is devastated and consequently, the Revolution is defeated. But they have not succeeded in achieving this goal until today and by Allah’s favor, they will continue to fail.”

Ayatollah Khamenei added: “During the earthquake that Islamic Awakening created, religion drew the people to the streets, but because the religious apparatuses in regional countries are separate from one another, this task was not continued and consequently, Islamic Awakening did not produce the desired results. But in the Islamic Republic, the continuation of the presence of ulama and the clergy – and consequently, the presence of the people in various arenas – has made the continuation of the revolutionary movement possible.”

He advised the clergy to study and to engage in self-edification, stressing: “You should show your willpower in undertaking cleric responsibilities because these responsibilities cannot be undertaken by any other specialty. Of course, this should not be interpreted as a permission to target positions and titles. The main goal should be to gain the satisfaction of God and of the Imam of the Age (may Allah the Exalted hasten his holy reappearance) at all times.

Elsewhere in his statements, the Supreme Leader of the Islamic Revolution referred to the statements of some of the professors and clergy in the meeting and said: “Taking care not to let Islamic seminaries change their seminarian approaches to university approaches, attending to the project of teaching ethics in Islamic seminaries and regionalizing clerical appointments is among the responsibilities of managers in Islamic seminaries. After carrying out proper studies, they should make a decision on these matters.” Ayatollah Khamenei also referred to the long history and significance of Tehran Seminary and the outstanding ulama who have been present in this seminary, stressing: “In the present time, Tehran Seminary has an identity. The value of this identity should be appreciated so that some outstanding personalities will be built in this seminary in the area of fiqh, aqli sciences, tafsir and hadith.”