Breaking News
Home / Conferences / Call for Papers: Islamophobia and the End of Liberalism

Call for Papers: Islamophobia and the End of Liberalism

The conference provides an inter-disciplinary platform to reflect and respond to the crisis of post-Cold war liberal order by exploring the relationship between Islamophobia and the reshaping of Western societies.

Islamophobia is most commonly understood to be a problem that impacts adversely on Muslim minorities living in Western countries.   The growing literature on Islamophobia has contributed to this understanding by focusing on the role of media in spreading of negative views about Muslims and Islam, the implication being that the problem of Islamophobia could largely be resolved by fairer media treatment.  It is not clear, however, that Islamophobia is simply about how Muslims are portrayed.   As recent events demonstrate, Islamophobia is implicated in the broader crisis of post-Cold War liberal order.

The electoral triumph of Trump has been hailed as a clear sign that the post-Cold war liberal order is unravelling.  The crisis of post-Cold War liberal order has been read in myriad of ways, including the failure of neo-liberal globalization, the fall-out from the financial crisis of 2008, the advance of technology.  Throughout the Western plutocracies, politicians and parties who would until recently be considered beyond the pale of political respectability are making electoral gains and reshaping the national conversation.  One of the central themes of these challengers to post-Cold war settlement is the desire to ‘take back their country’.  Despite the variety of national and regional contexts in which these narratives of national recovery and restoration are situated, the Muslim presence looms large as an obstacle and a threat.

The Muslim threat enables assertions of national security, cultural integrity and social cohesion to trump demands for diversity, liberty and equality.  Islamophobia is not just  about the fate of Muslims but about the possibility of an inclusive and sustainable future for all.   Not only because the systems of surveillance and restriction deployed to discipline Muslims can be easily redeployed and redirected at other targets, but also because such interventions and controls threaten to reverse the gains in civil rights and multiculturalism that have to come characterize Western plutocracies in the last fifty years.

There is a need for an approach to the study of Islamophobia which explores the way in which it is being institutionalized by policies that promote and police a conception of Western societies that appears to be becoming increasingly exclusive and exclusionary.  This conference provides an inter-disciplinary platform to reflect and respond to the crisis of post-Cold war liberal order by exploring the relationship between Islamophobia and the reshaping of Western societies.

The conference addresses question of the relationship between liberalism (and neo-liberalism) and Islamophobia.

*  What is the relation between the discourse of ‘take our country back’ and the post-Cold war liberal political order?

*  What intellectual and political resources and possibilities now exist for imagining the West in contravention of Islamophobia?

*  Is the presence of the non-white, culturally unassimilable, rights bearing subject a political problem for western liberalism?

*  What is the relationship between neo-liberal economic policies and rise of Islamophobia?

Conference Title: Islamophobia and the End of Liberalism

Note: Abstracts are limited to no more than 300 words and a one paragraph (100 words) biography that can be used for the purposes of the program if the paper is selected.  Please don’t send us a complete CV, or anything other than a short bio. 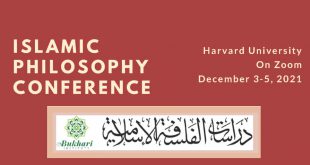 Islamic Philosophy Conference to Be Held at Harvard University

The aim of the conference is to promote the study of Islamic Philosophy, broadly conceived, in its historical and contemporary context....