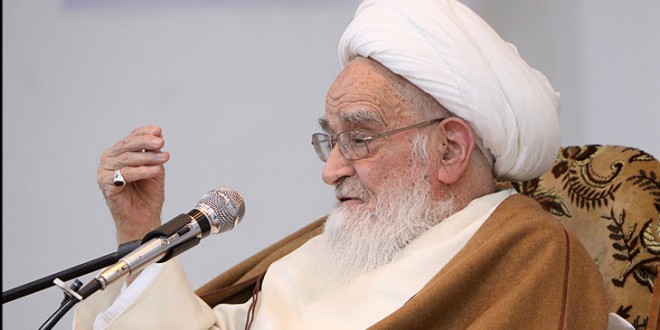 Ayatollah Safi: “Extremists have no conception of Islam teachings,”

Ayatollah Safi Golpaygani served any possible tie between the divine religion of Islam and extremist groups stressing. ““Those who bent on to tarnish the holy image of Islam have no conception of its principles and ordinance,”.

“Muhammad Prophet (PBUH) was sent as the mercy to mankind while in the here and now those people who are defaming Islam have no conception of from his teachings,” pointed out the religious instructor at Qom seminary.

Religious cleric went on to stress those of extremist group who had made it a practice to forward their organized crimes were in point of fact oppressing the divine religion, Muhammad Prophet’s (PBUH) teachings and Quran instructions.

Ayatollah Safi Golpaygani went on to place emphasis on this very line that “that Islam is the religion of peace” urging Muslims to abide by the commands of Quran and teachings of Ahlulbayt.

Along with Ayatollah Safi Golpaygani, many clerics slam the willful measures of extremist group left over thousands of innocent people dead. In their lines, Muslims should be too well united against the enemies at the present situation.

On the occasion of the sixth anniversary of the Grand Ayatollah Sistani’s Fatwa of the Kafaei Jihad to fight against ISIS terrorists, the letter of Martyr Abu Mahdi Al-Mohandis in response to the Fatwa of...