Breaking News
Home / All / Ayatollah Taskhiri Passes away at 76

Ayatollah Taskhiri Passes away at 76 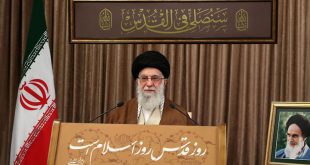 Normalization Should be Declared Haram by Muslim, Christian Religious Scholars

The Value of Zakat al-Fitrah in the US for 2021 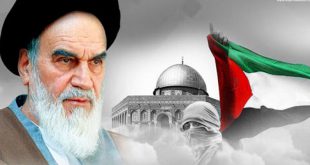 Book: Palestine from the Viewpoint of Imam Khomeini

Ayatollah Mohammad Ali Taskhiri, representative of Tehran province in Iran’s Expediency Council and senior advisor to the Leader of the Islamic Revolution passed away at the age of 76 after a heart attack on Tuesday.

He established the Islamic Culture and Relation Organization in 1995.

In 2001, he was elected by Ayatollah Khamenei as the Secretary-General of the World Forum for Proximity of Islamic Schools of Thought.

On July 14, 2012, he resigned from his post as the Secretary-General of the World Forum for Proximity of Islamic Schools of Thought and was appointed as senior advisor to the Leader of the Islamic Revolution in the affairs of the Islamic world.

Born
Mohammad Ali Taskhiri Ayatollah was born in 1944 in the holy city of Najaf, Iraq.
Religious Education
He acquired his primary and middle-level education from Najaf while for the acquisition of highest educational level of the Islamic Seminaray ( Hawzah) i.e. “Dars-e-Kharej” which contains advanced religious courses, he gained extensively from the renowned Ulama of Najaf Ashraf.
Academic Education
Taskhiri attained the university-level education on Arabic literature, Islamic law & Jurisprudence from the Fiqh College of Najaf Ashraf. Along with the acquisition of education, during his stay in the Islamic Seminary of Najaf Ashraf, he was also engaged in the teaching of the Islamic subjects.
As regards the Arabic poetry and literature, he benefited from the distinguished mentors like Ayatollah Sheikh Muhammad Reza Muzzafar, Sheikh Abol Mehdi Matar and Sheikh Muhammad Amin Zain-ud-Din. Being fond of the Arabic poetry and literature at a tender age, he versified many Arabic odes and on diverse occasions delivered literary lectures at different forums of poetry and literature.
Political Activities
In the political arena, he played a dynamic role against the Bathist party of Iraq and for the same reason he was jailed and also given death sentence. But with the grace of Almighty Allah he was released later.

Emigration to Qum
In 1971 he proceeded to the Qom Islamic Seminary in Iran and for ten years attended the lectures delivered by the leading Ulama like Ayatollah Golpayengani, Ayatollah Wahid Khurasani, and Ayatollah Mirza Hashem Amuli.
In the aftermath of the victory of the glorious Islamic Revolution in Iran, he fully got engaged in the cultural activities and the preaching of Islam, in Iran and elsewhere in the world. During this period, Ayatollah Mohammad Ali Taskhiri held different cultural, propagation and administrative positions and undertook various responsibilities.

Responsibilities
Some of his responsibilities in political arena include: Representative Gilan province in the Assembly of Experts, Supreme leader’s advisor in Islamic World’s cultural affairs, Head of the Islamic Culture and Relations Organization from its establishment until 2001, International affairs director at the Islamic Ideology Propagation Organization, Member of Islamic Ideology Propagation Organization’s Board of Trustees, Culture and Islamic Guidance Minister’s advisor on international affairs, Secretary General of the Ahl-ul-Bayt (AS) World Assembly. Following appointment by the Supreme Leader of the Islamic Revolution he is now serving as the secretary general of the World Forum for Proximity of Islamic Schools of Thought.

Works
Ayatollah Taskhiri has authored over 50 books on various Islamic topics including Islamic ideology, Fiqh (jurisprudence), Islamic economy and Islamic history. He has also penned some 350 articles on Islamic issues including unity. Many of his works have been translated into English, Urdu and other world languages.
Share 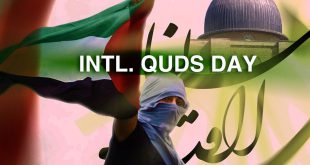 In accordance with Imam Khomeini's instructions, the day is considered an opportunity to reflect the voice of the voiceless Palestinians, who are living under the oppression of the...