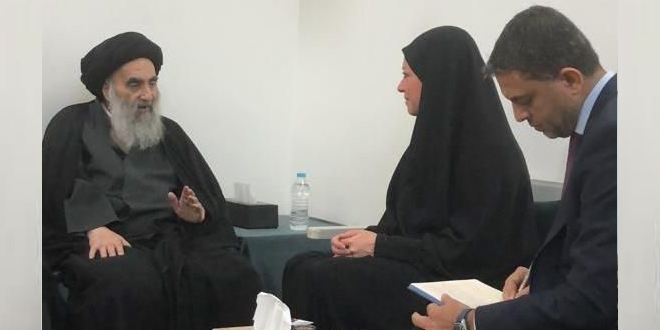 The office of the Supreme Religious Authority in Najaf Ashraf issued a statement about his meeting with the special representative of the Secretary-General for Iraq.

The official bureau of the Grand Ayatollah Sayyid Ali Sistani issued a statement on Monday evening to announce that his eminence received Mrs. Jeanine Antoinette Plasschaert, Head of the United Nations Assistance Mission for Iraq (UNAMI), this morning in Najaf Ashraf.

The statement is as follows:

Ayatollah Sistani expressed deep concern over the current on-goings in Iraq, pointing out that in recent years, he has repeatedly warned about the dangers of increasing financial and official corruption, inappropriate public services and the lack of social justice. However, these warnings have not found a hearing ear from the authorities to address these issues and as a result the work has reached to this very dangerous situation.
The Supreme Religious Authority stressing the need for genuine reforms within a reasonable timeframe and also welcoming the recent proposals offered by the UN delegation in this regard, expressed concern that the relevant parties are not sufficiently serious to implement any real reforms.

It has been also noted in the meeting that if the Iraqi executive, legislative and judicial authorities cannot implement the necessary reforms or do not want to do so, we should think of a different approach because it is not possible to continue the situation as it was before the protests.
Ayatollah Sistani emphasized the need to refrain from using violence against peaceful demonstrators and to stop detaining and kidnapping and to interrogate those who committed such acts contrary to Sharia and law, and stated that he is opposed to foreign interference in Iraqi affairs and turning the country into a conflict scene between regional and international powers.