He advised that everyone should do the following in their own capacities:

“Beseech the exalted God to extend His mercy upon His creatures. This requires us all to purify our hearts and rekindle our relationships with one another. And to turn to all that is good, and finally to pray sincerely to the source of our sustenance and ultimate means of our survival and happiness. We must pray that He lifts this calamity from us.”

“Governments around the globe must unite in their efforts against this challenge. In dealing with this existential threat we have no choice but to set aside all our differences and rivalries in creating a concerted front, working in unison and in a spirit of cooperation. Nations must also uphold their responsibilities, as governments can only do so much. It is ultimately the people who – through their acts of compassion and kindness toward one another – can turn the tide of this deadly menace.”

“Charities and benevolent groups can play a big role in helping those most affected. This is because acts of charity – combined with prayer – have the power to reverse impending cataclysmic misfortunes and must never be underestimated. They are among the most potent tools in eradicating this virus and mitigating its tragic consequences.”

The Grand Ayatollah commended the role of faith leaders around the world in providing spiritual guidance in these trying times and helping people confront the challenges we face. He also stressed the importance of following the guidelines provided by relevant authorities and coordinating with governments in providing relief for those in need. His Eminence also called on the media to uphold its moral responsibility in raising awareness and in providing accurate information, rather than look for ratings or engage in political point-scoring.

“The dark cloud hovering over the entire planet today can irreversibly alter the current world order, making it either a harbinger of a dark dystopia, or an opportunity for fundamental adjustments to a society scarred by injustice. The shock to our collective conscience may prove to be our one and only chance to bring about a paradigm shift and a much-needed overhaul to our lifestyles.”

“This crisis could be turned into an opportunity to reflect on the systemic problems plaguing our lives. Due to this pandemic we’ve seen wars coming to a grinding halt. We’ve seen wealth previously kept in bomb-proof vaults given back to the people. We’ve seen overpopulated prisons vacated of non-violent inmates to join their loved ones. We’ve seen people spending more time with their families and children. We’ve seen an environment on the verge of collapse getting a much needed respite. We’ve seen people finally turning to God for salvation, and engaging in timely soul-searching. These are reforms that should be capitalized upon if we are to see a positive sea change and a brighter future.”

Indeed, Allah will not change the condition of a people until they change what is in themselves. And when Allah intends for a people ill, there is no repelling it. And there is not for them besides Him any patron.(13:11) 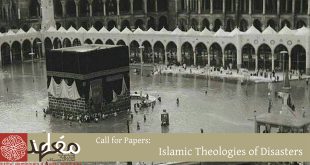 Call for Papers: Islamic Theologies of Disasters: Between Science, Religion and Messianism

Video: Ayatollah Khamenei’s Advice on Mourning in Muharram amid Coronavirus

The Shia prominent jurist, Ayatollah Sayyid Ali Khamenei offers some advice for Imam Hussain (as) mourning on this Muharram during Coronavirus outbreak....