Breaking News
Home / All / Fiqh & Socitey / What Did Ayatollah Jawadi ’Amoli Say to the Movie People?

What Did Ayatollah Jawadi ’Amoli Say to the Movie People?

Iranian Shia Cleric said art, especially the cinema, should provide a setting for the realization of truth.

’Ijtihaad Network reports: Emphasizing that art, especially the cinema, should provide a setting for the realization of truth[1], Ayatollah Abdullah Jawadi ’Amoli[2] said, in a meeting with a group of Iranian movie people, “We should remember that the cinema is not a medium for fantasy and imagination since wherever thought and art are present, it is all about truth and Ḥaq; thus, we [as human beings and as thinkers]live in the world of truth, and those who consider some art forms and media to be virtual, imaginative, or fantastic in nature, would never think so if they regarded the path of thought the straight path [to Allah].[3]” 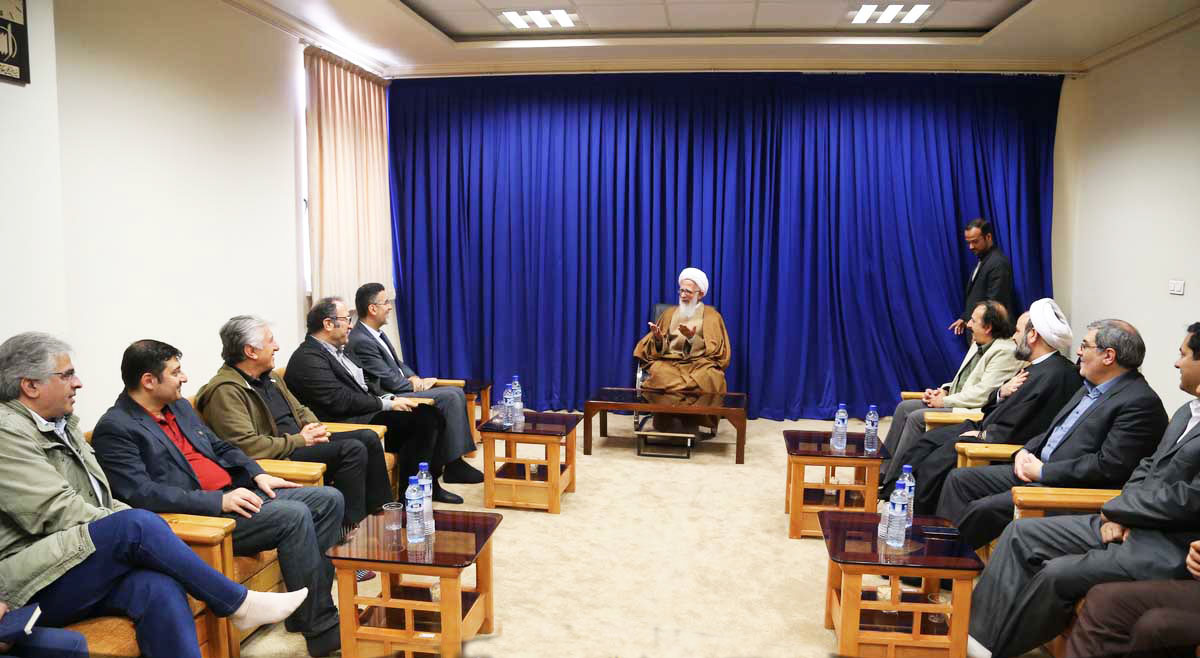 The cinema, as a communication medium, is enormously influential when the need for establishing the discourse and culture of divine revelation arises.

Highlighting the substantial role of mass media, including the cinema, in establishing the divine culture [and discourse], the exegete[4] of the Qur’an added, “In the Glorious Qur’an, we observe that the language shared by all humankind [is introduced and defined: Allah, in] the Qur’an says [that He has] created the universe based on one common element, which is the Truth or Al-Ḥaq. In other words, the essence of the structure of all the world is the Truth or Al-Ḥaq, and the cosmos [by nature] is not adaptive to falsity or (al-)baaṭil[5], so it rejects falsehood – the fake version of the Truth. When our horizon stretches beyond the natural layer of existence and we start to view the creation from a broader and deeper perspective, i.e. fiṭrah[6] – the primordial human nature –, then we will see that no one will ever agree with untruth, deception, perfidy, breach of promise, etc. [which are all based on baaṭil or falsehood].Islam in fact issues a universal statement when it says, you can live with those who lack ‘’imaan’ – religious belief – but cannot live with those who lack ‘’aimaan’ –loyalty to vows. The shared language by humankind is that which can help to renew ‘’aimaan’ – the vow[to abide by the Truth or Al-Ḥaq] –and the cinema holds vast potential for the promotion of ‘’aimaan’ – keeping the vows – which can prove acceptable to all people [if we attempt to refer them back to their original fiṭrah. Thus, the cinema [, which is expected to speak the universal language,]– exactly as art in general does, should reflect the shared language of all the world, that is the language of fiṭrah – the primordial, common nature of humanity.”

“The world is willing to accept the words of Islam today –” he continued, “words such as upholding oaths, the protection of individual privacy, etc. If we attempt to make this shared language take a form that is tuned to the faculty of reason and then employ art to put that rational language into a tangible form, the society will widely welcome this, for art is powerful enough to influence its audience and change the members of the society in a way that they will no longer lie, be disloyal, commit a breach of faith, commit embezzlement, practice deception, etc., and [art is] even more [powerful in purifying the society].”

The necessity to produce and screen the remaining seasons of [the recent version of] the movie ‘Muhammad, Allah’s Messenger[7],’ peace upon him and his Household

Hoping that the remaining seasons of the theater movie, ‘Muhammad, Allah’s Messenger,’ peace upon him and his household, be produced and screened, he emphasized, “The teachings of the Prophet of Islam address all humanity through a shared language; this movie is a definite answer to the doubts cast on, questions regarding, and misrepresentations of the Qur’an by Salman Rushdie and the like, since the only means by which we can resolve such doubts, respond to such questions, and correct such misrepresentations using a live, [active, simple] language is this very artistic language, so I expect that the forthcoming seasons, covering the early youth and the divine Mission of the Prophet of Islam, peace upon him and his Household, will be produced and screened, too, so that the people all around the world will become familiar with the genuine personality and the blessed truth of the holy prophet of Islam from every conceivable angle even more than ever before.” Narrow-mindedness will not prove fruitful [if we are to produce successful, genuine movies] in the cinema.

Citing a hadith about the holy Prophet of Islam, who allowed Christians to enter the mosque to worship there, and their own way at that, Ayatollah Jawadi ‘Amoli concluded, “We cannot succeed if we approach movie making narrow-mindedly; in fact, it was due to the large-mindedness of the Prophet of Islam, peace upon him and his Household, that the Christians – having been allowed by the Holy Prophet to worship in the Mosque of Medina[8] – embraced Islam wholeheartedly.”

He recommended that all artists, especially movie people, should remember that “Art and Fiqh[9] should have a two-way interaction with each other.” 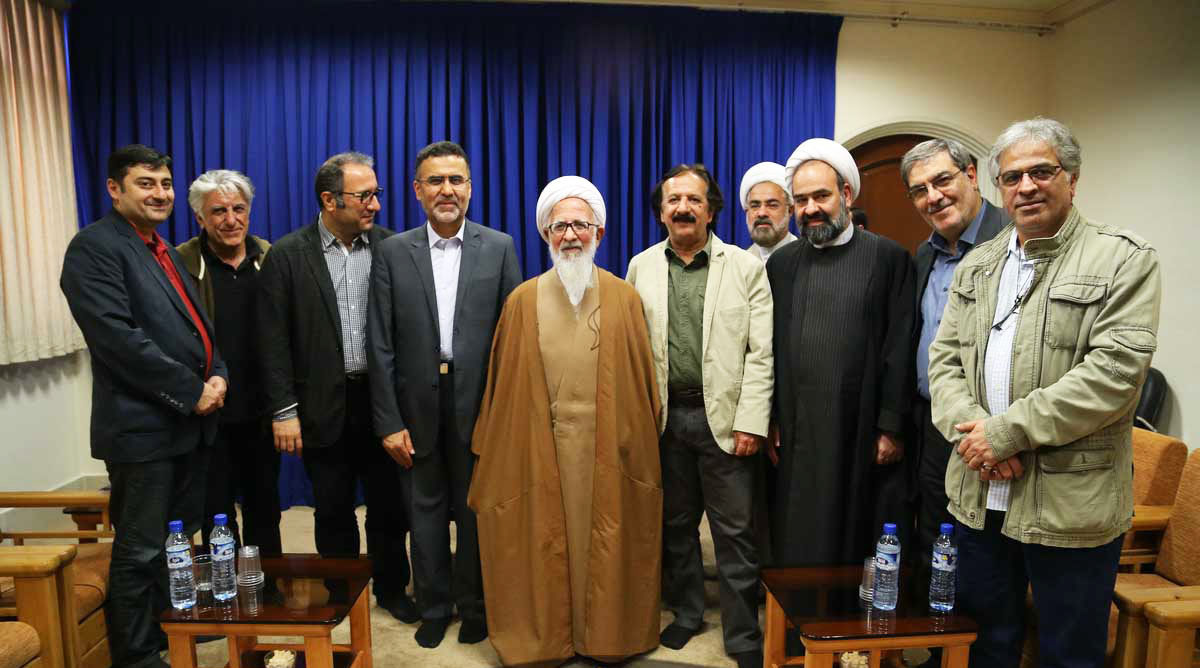 The outstanding teacher of the Houzah ‘Ilmyiah Qom[10], comparing art to[a sound] awakening human beings from the [drunken] sleep of negligence, went on, “The Western Cinema can be compared to a [quiet] music that lulls you to sleep, while some types of music awaken people from sleep; indeed the music that interrupts or disturbs your sleep, may initially sound unpleasant to you, but, after a while, you feel happy for this awakening and consciousness, and the same situation applies to our cinema: it should operate exactly as awakening music does: awakening heavy sleepers from the sleep of negligence.”

We must attempt to clearly define the boundaries of genuine art and carefully distinguish and separate them from those of superficial, fake art.

Ayatollah Jawadi ‘Amoli, considering that mutual agreement between content and form is a fundamental requirement of [genuine] artistic production and even of all scientific or scholarly works, proceeded, “If the content is rich, but the handwriting [or the type] is illegible, it will be extremely unlikely at the first place that anyone will be eager to pay attention to the content, but if the handwriting is [neat, legible, and] beautiful, then everyone will truly desire to see what the content is like. Accordingly, art [speaks louder than words as it] appeals to all the five senses, and the cinema does likewise. We will not do justice to this [communication] medium – the cinema – if we use it in order to simply feed people’s imagination, just as the Western art does; rather, we should attempt to clearly define the boundaries of genuine art and carefully distinguish and separate them from those of superficial[, fake] art. Fake art sends you to sleep, while, on the other hand, genuine art awakens heavy sleepers from the sleep of negligence, brings unconscious minds back into consciousness, and brings about positive effects on the society.”

[1] Al-Ḥaq (الحَق), sometimes used interchangeably with al-ḥaqiqah, originally referring to Allah as the True Creator and Manager of the multiverse, also denotes the system of truth introduced in the Glorious Qur’an as the only structure based on which all the cosmos has been created. Ayatollah Jawadi ’Amoli’s discussion of what the nature of movie making should be like is emphatically based on the notion of Ḥaq throughout a lecture, part of which has been translated in this article. Al-Ḥaq is always defined as contrary to (Al-)baaṭil ((ال)باطِل), the fake, imaginary, or Satanic structure that tries to replace the true structure of the cosmos in vain.

[3] Here the following ayah (Qur’anic verse) is implied: إهدنا الصراط المستقیم: Guide us through the Straight Path (The Qur’an, Al-Fātiḥah).

[4] Exegete or mufassir (مفسر) here denotes a Muslim scholar who is equipped with Qur’anic and Hadith expertise and attempts to elaborate on the meanings, the original/intended context of situation, etc. of the Holy Book.

[6] Al-fitrah (الفِطرة) refers to the notion of the divine, in-born inclination in all human beings towards Allah and His Path, which has been derived from Surah Al-Rum in the Qur’an:

“So set your heart as a person of pure faith on this religion, the original nature endowed by Allah according to which He originated mankind There is no altering Allah’s creation; that is the upright religion, but most people do not know.” (The Qur’an, 30:30, English translation by Ali-Qoli Qara’i, extracted from http://tanzil.net/#30:30with some correction here)

[7] Muhammad, Allah’s Messenger (محمد، رسول الله) is the second movie produced about the life of the Prophet of Islam, peace upon him and his Household, directed by Majid Majidi in Iran. A 2015 Iranian Islamic epic religious film, co-written by Majid Majidi and Kambuzia Partovi, the film is set in the sixth century where the story revolves around the childhood of the Islamic prophet, Muhammad, peace upon him and his Household.

See more on this topic in the following address:https://en.wikipedia.org/wiki/Muhammad:_The_Messenger_of_God_(film).

[8] Al-Masjid An-Nabi/The Prophet’s Mosque, Allah’s peace and salutation upon him and his Household

[10] The Shi’i Religious School for Islamic Scholarship in Qom city of the Islamic Republic of Iran, the greatest International Shi’a center for Islamic teachings

Previous “Jafari Jurisprudence leaves no modern inquiries unanswered” A. Fazel
Next The Life of the Commander of the Faithful Ali Ibn Abu Talib (as)

Call for Papers – “The Nature of Soul and Death”

The Inaugural Annual IRS Academic Workshop in the Eschatology Series, hosted by Al-Mahdi Institute (AMI), provides a forum for sharing perspectives related to the nature of the human soul, its transitioning at the point of death and the....