Martyrdom
During the revolution, he wrote an introduction to the eighth edition of this book, attacking distortions of the thought of Ĥafiz and Hallaj that had become fashionable in some segments of Irānian society and refuting certain materialistic interpretations of the Qur’ān. The source of the interpretations was the Furqān group, which sought to deny fundamental Qur’ānic concepts such as the divine transcendence and the reality of the hereafter. As always in such cases, Muťahharī’s tone was persuasive and solicitous, not angry or condemnatory, and he even invited a response from Furqān and other interested parties to comment on what he had written. Their only response was the gun.
The threat to assassinate all who opposed them was already contained in the publications of Furqān, and after the publication of the new edition of `Illal-e-Girayish ba Maddigarī, Muťahharī apparently had some premonition of his martyrdom.
According to the testimony of his son, Mujtabā, a kind of detachment from worldly concerns became visible in him; he augmented his nightly prayers and readings of the Qur’ān, and he once dreamed that he was in the presence of the Prophet (S), together with Āyatullāh Khumaynī . On Tuesday, May 1st, 1979 Muťahharī went to the house of Dr. Yadullāh Sahābī, in the company of other members of the Council of the Islāmic Revolution.
At about 10:30 at night, he and another participant in the meeting, Engineer Katira`i, left Sahābī’s house. Walking by himself to an adjacent alley where the car that was to take him home was parked, Muťahharī suddenly heard an unknown voice call out to him. He looked around to see where the voice was coming from, and as he did, a bullet struck him in the head, entering beneath the right earlobe and exiting above the left eyebrow. He died almost instantly, and although he was rushed to a nearby hospital, there was nothing that could be done but mourn for him. The body was left in the hospital the following day, and then on Thursday, amid widespread mourning, it was taken for funeral prayers first to Tehran University and then to Qum for burial, next to the grave of Shaykh `Abdul Karīm Hā’irī .
Āyatullāh Khumaynī wept openly when Muťahharī was buried in Qum, and he described him as his “dear son,” and as “the fruit of my life,” and as “a part of my flesh.” But in his eulogy Āyatullāh Khumaynī also pointed out that with the murder of Muťahharī neither his personality was diminished, nor was the course of the revolution interrupted:
“Let the evil-wishers know that with the departure of Muťahharī – his Islāmic personality, his philosophy and learning, have not left us. Assassinations cannot destroy the Islāmic personality of the great men of Islām…Islām grows through sacrifice and martyrdom of its cherished ones. From the time of its revelation up to the present time, Islām has always been accompanied by martyrdom and heroism.”
The personage and legacy of Āyatullāh Muťahharī have certainly remained unforgotten in the Islāmic Republic, to such a degree that his posthumous presence has been almost as impressive as the attainments of his life. The anniversary of his martyrdom is regularly commemorated, and his portrait is ubiquitous throughout Iran. Many of his unpublished writings are being printed for the first time, and the whole corpus of his work is now being distributed and studied on a massive scale. In the words of Āyatullāh Khamene’ī, President of the Republic, the works of Muťahharī have come to constitute “the intellectual infrastructure of the Islāmic Republic.”
Efforts are accordingly under way to promote knowledge of Muťahharī’s writings outside the Persian-speaking world as well, and the Ministry of Islāmic Guidance has sponsored translations of his works into languages as diverse as Spanish and Malay.
In a sense, however, it will be the most fitting memorial to Muťahharī if revolutionary Iran proves able to construct a polity, society, economy and culture that are authentically and integrally Islāmic. For Muťahharī’s life was oriented to a goal that transcended individual motivation and his martyrdom was the final expression of that effacement of self.
Share 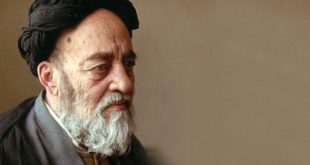