The 29th edition of the International Islamic Unity Conference wrapped up in Iran Capital of Tehran. What follows here the conference’s released final statement.

In the Name of God, the Beneficent, the Merciful
Final statement of the 29th Islamic Unity Conference

29th Islamic Unity Conference with the theme of “Present Crises of Muslim World and Ways to End Them” was held on December 27-29 December, 2015, concurrent with the birthday anniversary of Prophet Mohammad (PBUH), dubbed as Islamic Unity Week.

The event with more than 600 scholars from Iran and across the world of Islam in attendance, began its three-day work with the opening speech delivered by Iranian President Hassan Rouhani maintained by other speeches gave by participants from other Islamic states and also 14 sideline committees discussing  the current issues of Muslim World.

Participants in the 29th Islamic Unity Conference also met with the Supreme Leader of the Islamic Revolution Ayatollah Khamenei listening to his thoughtful remarks on the main theme of the conference. 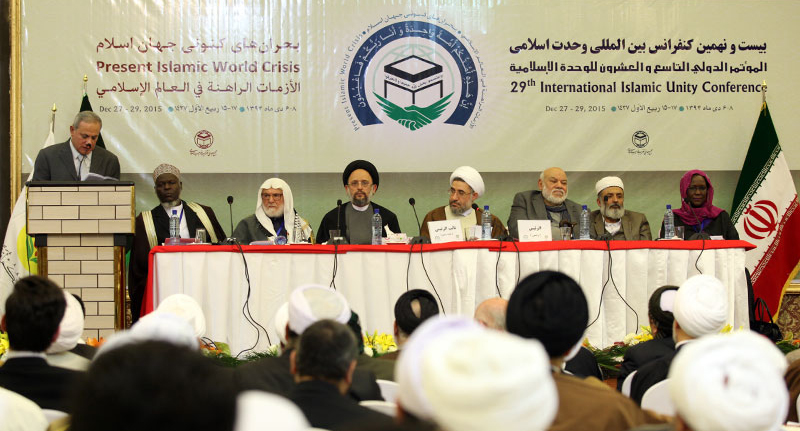 The final conclusions of the conference are as follows:

1.Participants believe that the major crises the World of Islam is suffering from include disintegration of Islamic countries and lack of trust amongst Islamic states. This has led to division which has paved the way for penetration of enemies into Islamic communities in a bid to fuel clashes between Muslims.

2. Present violence and terrorism faced by the World of Islam are within preplanned plots to tarnish the image of Islam and providing the grounds for intervention of the enemies in the domestic affairs of Muslims.

3. The wave of terrorism harassing Muslim countries is in line with Zionist terrorism and American intrigues whose final objective is to dominate Muslims following their redrawing the World of Islam and carry out the plot “managed chaos” for shaping  the so called New Middle East. Certainly these destructive hands will not be confined to a single country since they intend to carry out their plots in all countries including supporters of terrorism.

4. The Palestinian question is high on the agenda of Muslim Ummah and with respect to the crises faced by Muslim World; Palestine is on top of the agenda. In fact illegal regime of Israel is the major cause of Muslim World crises. Hence participants in this conference demand the nations and governments to maintain their utmost attention to Palestinian cause and do not let present fake crises distance them from the issue of Palestine. Participants also call Palestinian groups to resolve their disagreements replacing them with unity to confront their common enemy. 5.Participants also warn against devastation of some Muslim countries including Syria, Yemen and Iraq which is in line with interests of the Zionist regime and world arrogant powers ,demanding mobilization of all capabilities and all out efforts for preventing the disintegration of regional countries in a bid to restore peace and security in the region.

6. Participants in this conference denounce worsening of the sectarian intrigues which have led to atrocities and insulting religious sanctities and Islamic rituals with recent suppression of Muslims in Nigeria and Azerbaijan. They demand Nigerian authorities to investigate and bring to justice those responsible for the crime which has left hundreds of people dead or wounded and reveal the present condition of the prominent cleric Sheikh Ibrahim al Zakzaki, member of the Supreme Council at the World Forum for Proximity of Islamic Schools of Thought and also bring him safely to his family to continue his Islamic activities. They also demand Azeri government to guarantee the rights of its nation and prevent any similar oppression like what has recently happened to the Muslim community in the country.

7. Participants to 29th Islamic Unity Conference demand for Muslim World decisions to be made away from dominance or pressure by arrogant powers and Zionist regime and that the potentials of the Muslim World are used for promotion and advancement of the Muslim World instead of infighting, destruction of Islamic countries, keeping Islamic countries backward. Participants express regret over wasting of petrodollars belonging to Muslim people and using that for massacre of Muslims, destruction of their countries and fueling the disagreements as well as hatching plot against resistance movement.

8. Scholars, elites and religious institutions in the world of Islam should avoid intrigues to buy off people and protect their character, status and identity. They also warn those Muftis who support violence, terrorism and Takfir calling them to maintain piety and prevent atrocities to lives, reputation and families of Muslims.

9. The only way to confront present crises requires resistance, ideological, cultural, economic, military and political views and that does not realize unless through cooperation among Islamic countries based on pervasive resistance.

10. Present economic crises in the world of Islam are partly due to decisions made by the capitalists and arrogant powers; hence, it is necessary that Muslim countries cooperate with each other within the framework of a common market.

11. Muslims should adhere to top Islamic objectives and mobilize all their efforts for achieving this great objective avoiding trivial issues in ideological and practical views and maintain creation of a new Islamic civilization.

12. One of the crises challenging the world of Islam is misleading people through propaganda and media outlets and these crises have worsened due to expansion of communication and satellite means and in this line enemies of Islam make use of media propaganda in a bid to fuel sectarian conflict among Muslims; therefore, cooperation of all Islamic countries in a bid to launch satellite channels for broadcasting the discourse of proximity and unity as well as thwarting the intriguing lies seem to be quite necessary.

13. Participants also acknowledged the Supreme Leader of the Islamic Republic, Ayatollah Sayyed Ali Khamenei where His Eminence has addressed the public opinion of the west particularly those of the youths demanding them to obtain the recommendations and values of Islam from its proper source and understand that the policy of hatred is in pursuit of distancing them from truth. Participants also join the voice of the Supreme Leader, where His Eminence stressed that the first steps in restoration of security and peace is rectify thoughts and policies which lead to violence and an example of this policy are dabble criteria imposed by the west and also diving terrorism to good and bad and also give priority to interests of the governments instead of those of the nations. 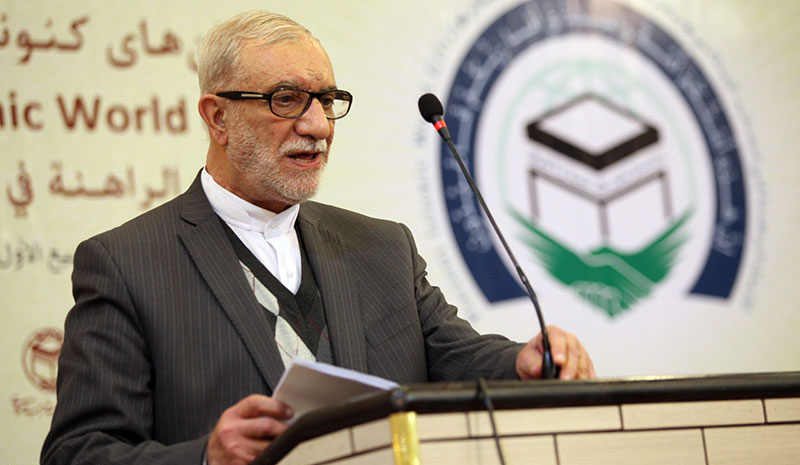 14. Need to cooperation among educational and research centers and also universities of the Muslim World in a bid to spread the culture of proximity and introduction of the true nature of Islam as a religion against violence and extremism. Here it is necessary that all groups and entities of the society including parties, unions and institutions of women and youths play an active role to spread this culture so that it is not limited to a certain group. Also proximity activists should not confined to the theoretical aspects rather they should be in serious pursuit of carrying out proximity through practicing proximity projects.

Praise be to God Almighty, Lord of the World

Previous A Letter to alAzhar Warning of Anti-Shia Activities
Next Which Companies sell Halal Cosmetics in UK??

Imam Khomeini’s great contribution was that he moved beyond the traditional Shi‘i political thought to urge establishment of the Islamic government even in the absence of the...